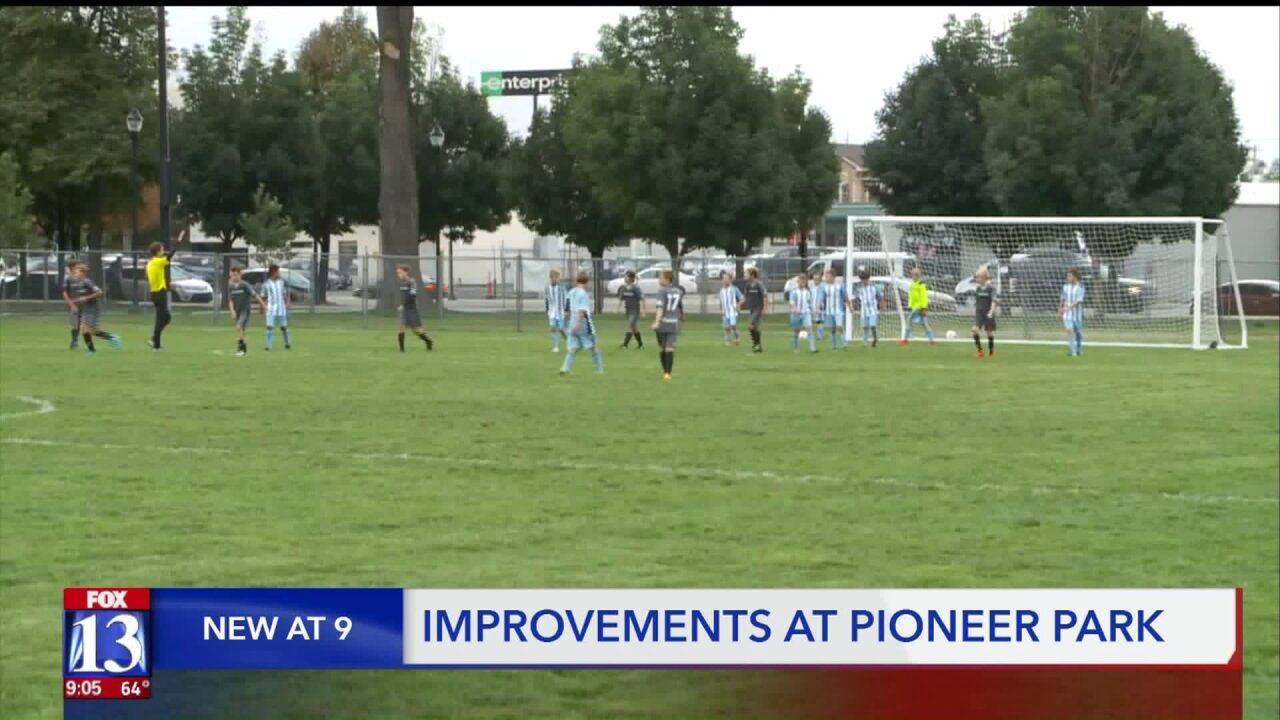 SALT LAKE CITY — Salt Lake City unveiled the end of a project to revitalize Pioneer Park, by showing off a new field, walkway, lighting and trees.

The park’s been notorious for issues in the past like homelessness, drug use and criminal activity. It’s also been a sore spot for local businesses.

On Tuesday evening, the city sent a message that things have changed at Pioneer Park with the new improvements. The city said the improvements were aimed at enhancing safety and security.

Standing at a podium, Salt Lake City Mayor Jackie Biskupski said the park, “will become an anchor in the downtown community, activating this space like never before.”

They kicked things off with a kids soccer match on the new field, which is meant to have many different uses, including for sports.

Johnny Peppinger, coach for the MetaSport FC Salt Lake Team, said it was a cool opportunity for kids to experience the city, and play in the heart of Salt Lake.

He knows what Pioneer Park used to be known for.

“It was just a place that you would avoid in general,” Peppinger said. “It wasn't safe. It was kind of scary.”

Seeing it in a different light Tuesday, Peppinger said it’s a good reset button for the park.

The space was filled with cheering families and playing kids.

Her 11-year old son Jack plays on the team. Scullion said she was nervous about finding needles or drug paraphernalia. Instead she found the park filled with families attending the Tuesday farmer’s market, and her son’s soccer game.

“It seems like with the bright lights and all the people here, it feels great,” Scullion said.

Though behind the line of families on the sidelines, in the distance stood a handful of people who appeared to be affected by homelessness.

Some wandered around, others stood next to a collection of belongings.

They surrounded the empty playground, and some of the people hung out on the playset.

“I don't feel comfortable letting the younger siblings go play on the playground,” Scullion said, looking back at the playground behind her.

Her 9-year old daughter Anika instead ran around on the new walkway, and stayed close.

“It is sort of a sad juxtaposition of, there's obviously people that are struggling. And then, we have the means to have our kids playing soccer,” Scullion said.

She said it was difficult to see. Still, Scullion said the park was cleaned up nicely.

Even if there is less of what Pioneer Park has been known for the in past, Scullion indicated she hoped that didn’t mean the cleanup in one area meant people went somewhere else.

“I just hope some of the homeless programs are helping,” she said.

The Pioneer Park Coalition, a group focused on improving the park, fronted $300,000 for the project.

The City’s Capital Improvement Program and the Redevelopment Agency picked up the rest of the cost.