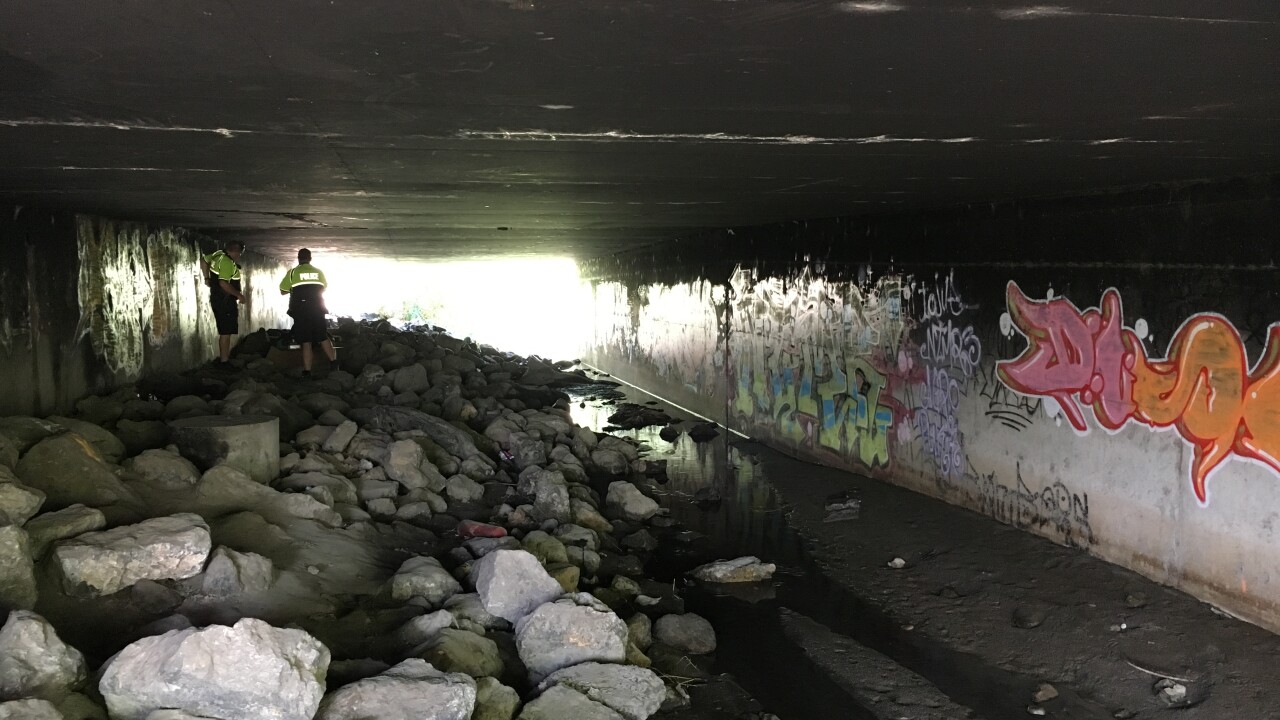 "OK, all right. Hey, you doing OK? Is he doing OK? You alright?" Sotelo asks a man who isn't rousing like the rest of the group. "You just sleeping?"

"Ain’t nothing wrong with that. You take care," Sotelo says.

At another group of people, Sotelo stops to make sure they're drinking enough water in the hot summer sun and reminds them lunch is served at St. Vinny's starting at 11:30 a.m. He asks a woman lounging on a blanket with her possessions around her how her efforts at securing housing are going. She tells him she thinks it'll happen soon and smiles.

Sotelo is permanently assigned to patrol the area around Pioneer Park and the Road Home shelter as part of "Operation Rio Grande." In the year since the massive crackdown on crime in the downtown neighborhood began, police continue to maintain a steady presence.

"Operation Rio Grande" was borne out of frustrations by downtown business leaders, residents and politicians about rampant crime and drugs in the area where rapid urban development is taking place. House Speaker Greg Hughes, R-Draper, fumed over people being attacked on the streets and an open-air drug market outside the homeless shelter.

Salt Lake City Mayor Jackie Biskupski had already launched "Operation Diversion," which offered people arrested an option: treatment or jail. It was soon folded into "Operation Rio Grande." It started with mass arrests, but has evolved to include treatment, jobs and housing opportunities.

Millions of taxpayer dollars have been spent on the issue, even as the Road Home shelter is scheduled to close in 2019 when new shelters open around the Salt Lake Valley. At a meeting Tuesday, stakeholders in "Operation Rio Grande" announced it would continue into a second year.

By the numbers, the operation has included:

Not everyone is thrilled with the operation. Neighboring communities have griped about an increase in crime. Some neighborhoods in Salt Lake City have complained the problems in Rio Grande were pushed their direction.

Salt Lake City police have started chasing the problems there. On Tuesday, Officer Chuck McNamee pulled up by the Jordan River and looked underneath a viaduct.

"How you doing?" he asked a man on the riverbank.

"Not too bad," the man replied.

The man said he was. McNamee told him it was illegal to camp there and started talking to him about the shelter.

McNamee asked the man if he'd ever heard of the Community Connection Center, which helps people get resources for treatment, jobs and housing. The man told him he had and promised to go down there for help.

A short distance away, officers ducked under an overpass to find a pair of men.

"Trying to at least? So, have you been contacted down here before?" McNamee asked.

"You can’t hang out down here," McNamee said, asking the men if the needed any resources.

The man replied no.

"Why not, if you don’t mind me asking?" McNamee asked.

"OK," McNamee chuckled, adding: "Do you want resources? Help you with some housing, employment, medical treatment, counseling or mental health or substance abuse? You interested in anything like that?"

The men were non-committal, but eventually shuffled along down the Jordan River.

For some of the people who have lived on the streets, Operation Rio Grande is a mixed success. Some said they feel safer, but others feel hassled by police.

"They come and tell us, 'Hey, you can’t be on the streets. Go to a park.' Guess what? Everyone comes to a park and the cops come. And everyone gets scared and they run," said one man, who asked FOX 13 not to use his name.

Amy Daeschel had a different view of the operation. She was arrested by police a few weeks into the crackdown.

"I would not be standing here alive today if it wasn’t for Operation Rio Grande," she told FOX 13.

Daeschel said she was living on the streets with a heroin addiction when she was picked up by police. In jail, she was pushed into drug treatment as part of "Operation Rio Grande." Now, she said she's clean and in sober living. She also works to help other recovering addicts.

Daeschel met with political leaders Tuesday to share her success story. But she also told them much more needed to be done to combat addiction, and said the community needed to understand the scope of the problem.

"There are a lot of good people out there who need the treatment programs," she said. "We need sober living. It's crucial."