Highway 89 reopens, residents along hwy 89 are on pre-evacuation notice 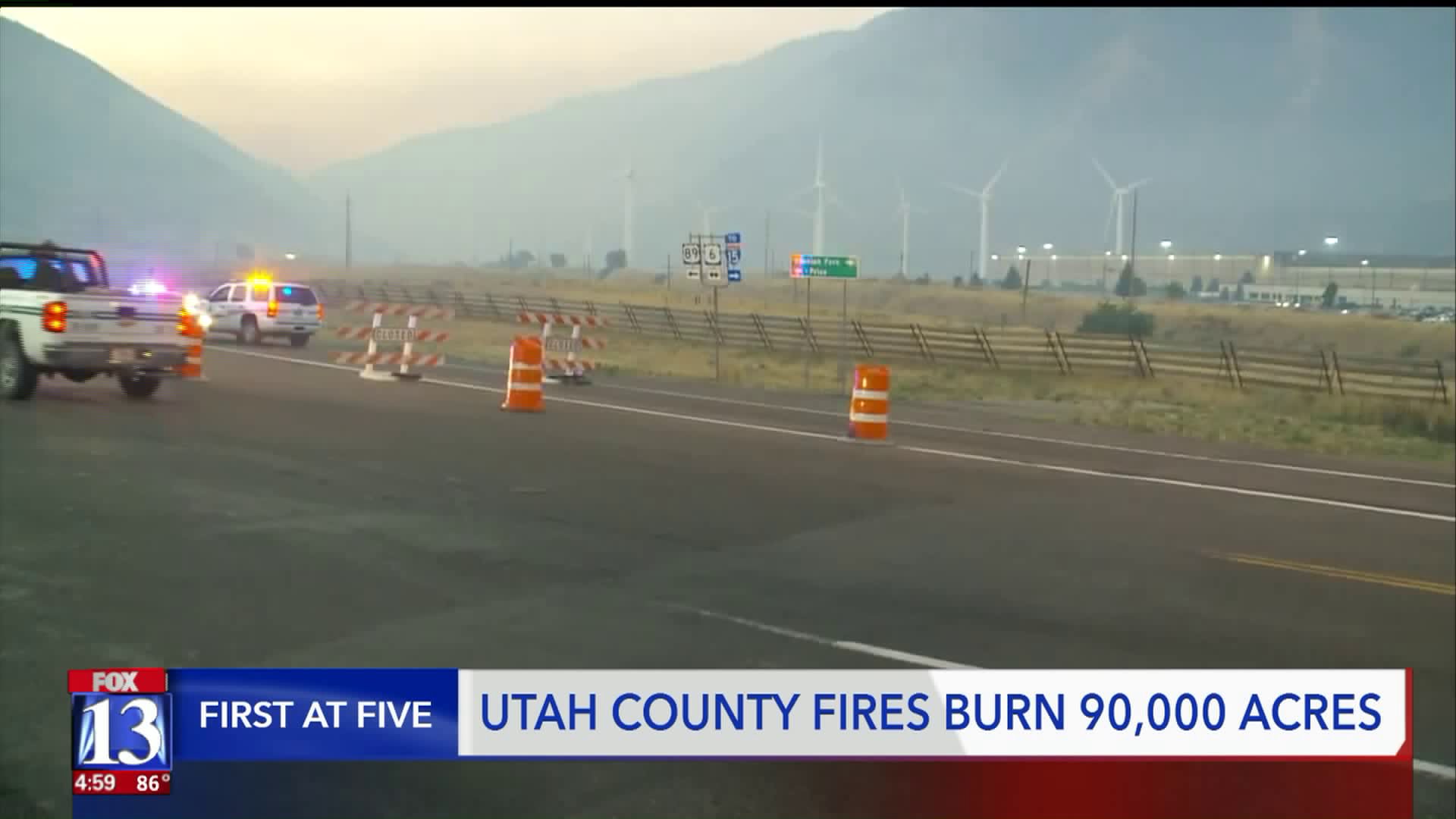 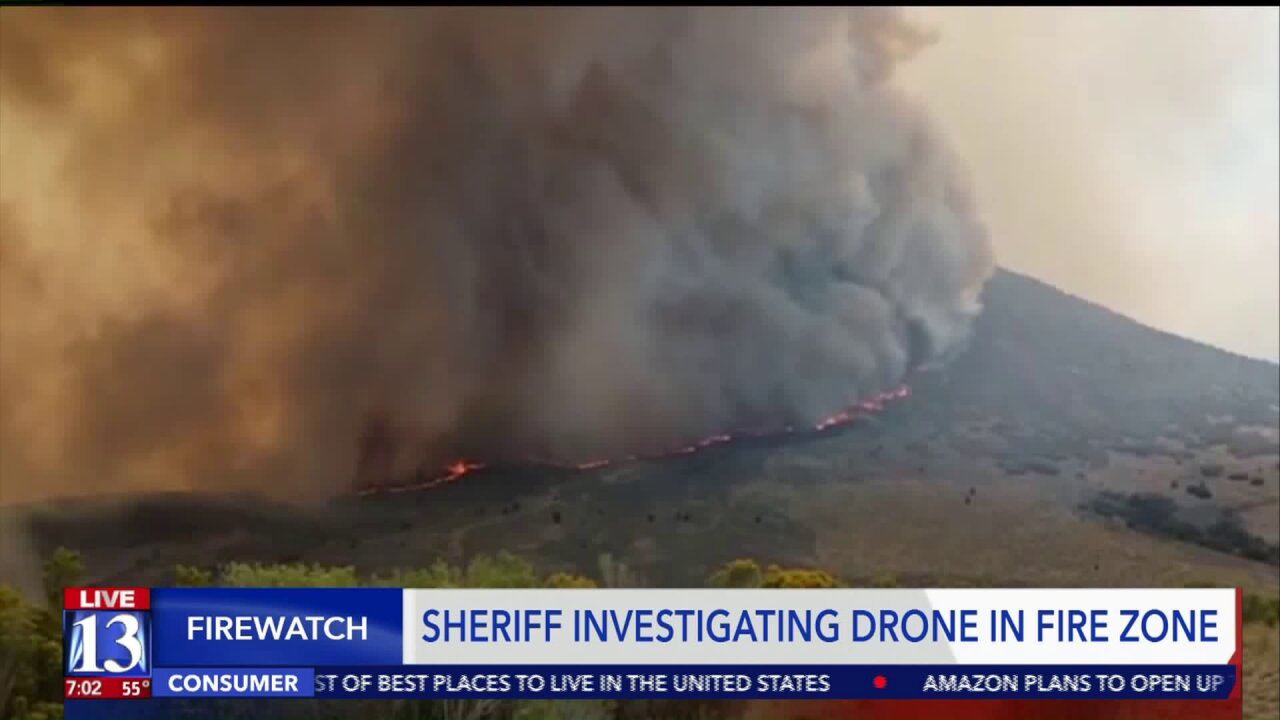 Breaking News: Highway 6 is now open near the #PoleCreekFire in Utah County. https://t.co/4BbVgSk05M

Update 9/19: A pair of large wildfires that have prompted thousands of evacuations in Utah County have grown beyond 100,000 acres combined as of Wednesday morning.

The Pole Creek Fire has burned an estimated 84,444 acres while the Bald Mountain Fire is burning on 16,554 acres. The combined acreage for both fires is estimated at 100,998 acres.

A Red Flag Fire warning was in effect Wednesday, which fire officials say is the ninth such day in the last 10. Wind speeds over 30 miles per hour challenged those fighting the Pole Creek fire and resulted in "very active fire behavior," according to fire officials.

Wednesday afternoon, a drone was spotted inside the restricted airspace above the Pole Creek Fire. All firefighting aircraft in the area were immediately ordered to stand down for their own safety and had to remain so until the drone was no longer in the area. The Utah County Sheriff's Office is seeking information on the drone owner who violated federal airspace restriction.

As of 6 p.m. Wednesday night residents of Eagles Landing were able to return to their homes, but are still on pre-evacuation notice. With the exception of the section of Highway 89 along which these residents live, fire officials said Highway 6 and Highway 89 will remain closed indefinitely.

The fire is also creating air quality issues in the area.

Here are the 9 a.m. charts for smoke pollution in the areas most affected this morning. The chart shows data from the last two days. Spanish Fork saw a spike to 214 µg/m3 in the last hour. This is the "Very Unhealthy" range. pic.twitter.com/8ek14GsnSF

The image below shows the most recent map of the perimeter of each fire.

To read about how community assistance has poured in for those who have been evacuated, click here.

UTAH COUNTY -- A pair of wildfires in Utah County have forced evacuations, closed roads and burned more than 90,000 acres as of Tuesday.

The Pole Creek Fire is on 74,509 acres and is 23 percent contained while the Bald Mountain Fire has burned an estimated 15,635 acres with no containment. The two blazes are the top fire priority in the country at present.

While there is no containment on the Bald Mountain Fire as of Tuesday morning, firefighters hope to change that shortly.

"Speaking for the whole fire, the whole Bald Mountain Fire, we're breathing a sigh of relief," said Dan Dallas, an operations chief on the Bald Mountain Fire. "We've had a couple of really good days, feel real good about getting that control feature in. Now we're going to really start concentrating on going direct at the fire's edge."

Still, others urged residents to be cautious with their expectations.

"I cannot stand here in good faith and give people false expectations or hope," said Todd Pechota, the PIO for the Bald Mountain Fire. "What I would rather do is under-promise and over-deliver."

US-89 remains closed in both directions from the US-6 junction near Thistle to the Utah/Sanpete County line.

US-6 is closed in both directions from the US-191 Junction north of Helper to the US-89 Junction in Spanish Fork. Drivers should use US 40 and US-191 or I-70 and US-50 as alternate routes.

As of Monday night, Springville residents are preparing for possible evacuations should the fires move closer to the town.

While no evacuations have been ordered for Springville as of Tuesday morning, residents are preparing for the worst.

Evacuations have been ordered in other areas, and the Utah County Sheriff's Office said as of Monday about 6,000 people have been evacuated from an estimated 2,000 homes in multiple communities. Utah County submitted a crisis declaration over the weekend in response to the fires.

Those evacuations have affected residents in Woodland Hills, Elk Ridge and the Covered Bridge and Birdseye communities. Many evacuees sought shelter at Salem Hills High School.

Airbnb has activated their Open Homes program in the area in response to the fires. The program encourages hosts in the area to sign up to provide a place to stay for evacuees, and those listings are open to affected Utahns, even if they are not a current Airbnb user. Airbnb provides free listings for the program and waives state and local taxes. Click here for more details or to sign up.

Fire Weather Warnings have been issued for much of Utah Tuesday, and smoke from the wildfires is expected to contribute to air quality issues.

Still very bad air quality in the Provo area as a result of the wildfires. Be safe out there, kids. @fox13 #Utah pic.twitter.com/13Sy0AYRR6