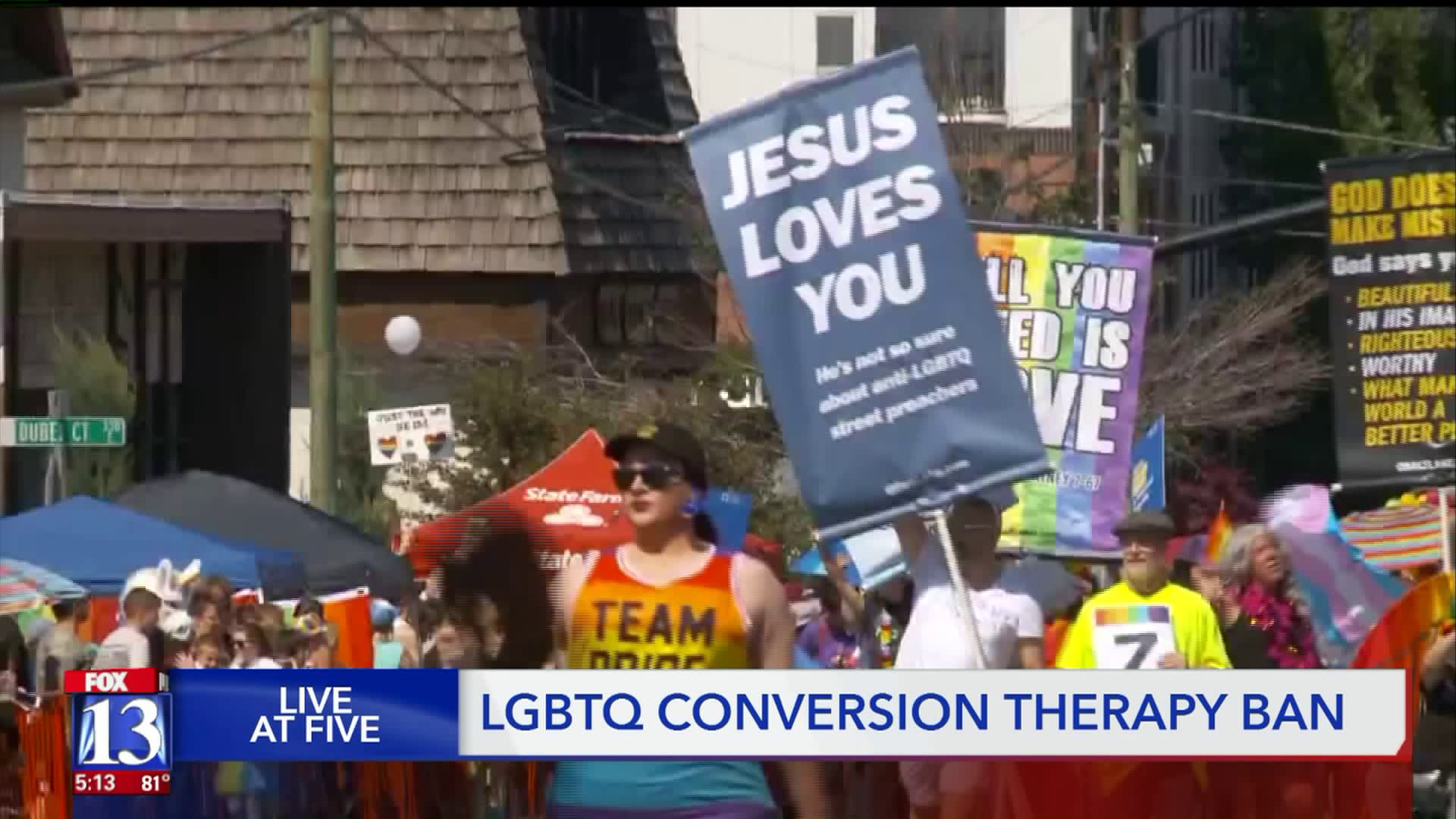 In a tiny room in the lobby of a nondescript government building, people shared their stories about the horrors -- and occasional relief -- that came from conversion therapy. 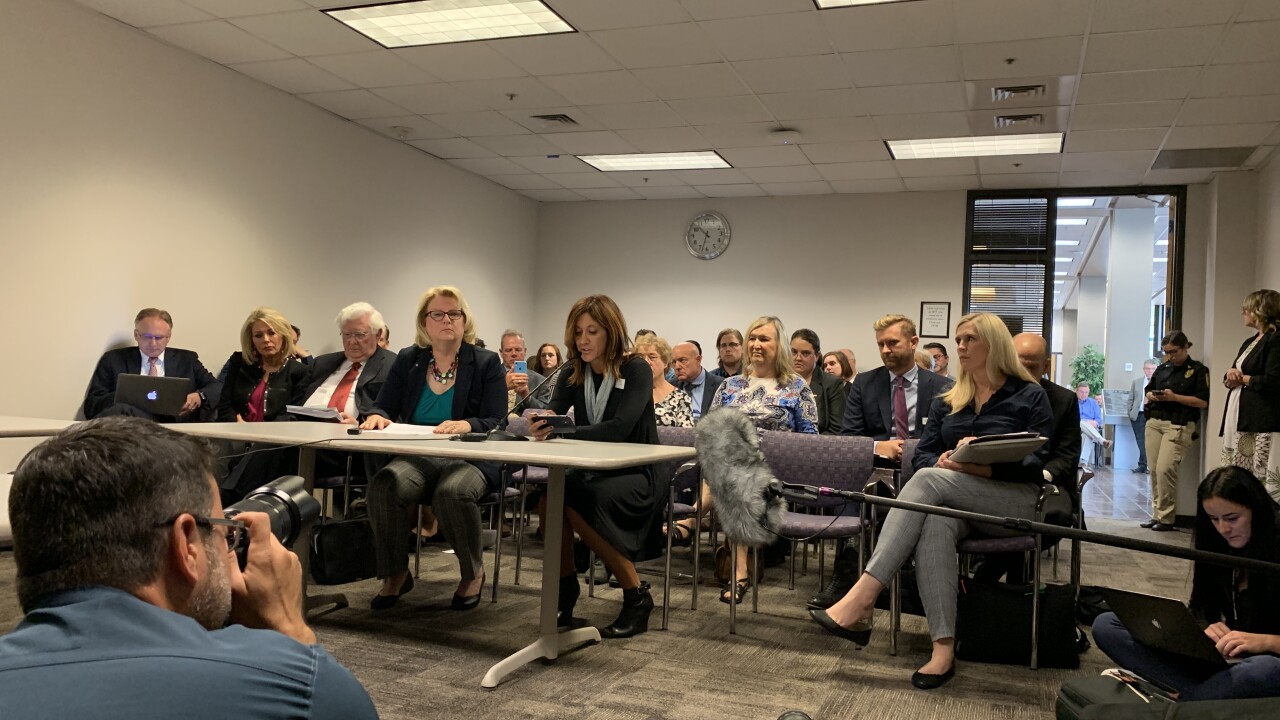 SALT LAKE CITY -- In a tiny room in the lobby of a nondescript government building, people shared their stories about the horrors -- and occasional relief -- that came from conversion therapy.

"Week over week, I was stripped of my identity, my dignity," said Justin Utley, noting that some therapists who attempted to change his sexual orientation were sitting in the room with him.

Stephen Done said conversion therapy helped him and he now lives with a wife and children.

Nathan Dalley said it drove him to attempt suicide.

"Conversion therapy doesn’t work. It is harmful. It’s been harmful to me. Throughout that process I attempted suicide and I’m lucky that I didn’t," Dalley said. "Many of my friends and people in the same position are not that lucky."

For about two-and-a-half hours, an administrative law judge heard public comment on a pair of proposed rules that would ban the practice of conversion therapy on LGBTQ children. Conversion therapy -- widely discredited -- is defined as efforts to force someone to change their sexual orientation or gender identity.

A bill was introduced in the Utah State Legislature earlier this year, but failed to pass when more conservative members of the House amended it to the point its own sponsor couldn't support it any longer. Governor Gary Herbert apologized to incensed LGBTQ youth who protested outside his office over how the bill was handled. Then, the governor directed the Utah Department of Commerce and the Utah Division of Occupational and Professional Licensing to draft rules governing the practice -- bypassing the legislature entirely.

"If it gets the same thing, if it prohibits conversion therapy on minors then that’s fine with me," he said.

Boards governing marriage and family therapists and psychologists have already approved the rule. Thursday's public comment was a part of the process. Dozens lined up to speak for and against it.

"We oppose efforts to change the sexual orientation or gender identity of patients using conversion therapy and we prohibit such practices by any of our employed or affiliated caregivers," said Dr. Mark Foote, speaking on behalf of Intermountain Healthcare.

Psychological associations and substance abuse counselors also supported the ban. Taryn Hiatt with the American Foundation for Suicide Prevention said Utah has some of the highest suicide rates in the nation.

"This proposed rule will protect our LGBTQ youth and it will help reduce the potential to have suicide risk and save young lives," she said.

The Trevor Project, a hotline for LGBTQ youth, said it received 1,300 contacts last year from Utahns seeking help. Some were afraid of being sent to conversion therapy by their parents if they came out as lesbian, gay, bisexual, transgender or queer.

Social conservatives argued the proposed rule would intrude on parental choice, infringe upon religious freedom or even freedom of speech to talk about sexual orientation or gender identity.

"Parents looking for help for their questioning child would not have any place to go for help," said Heidi Weyland of the Empowered Families Coalition.

Jeff Robinson, a therapist who said he has counseled people struggling with their sexual orientation, believed it would harm efforts to allow patients to make their own choices.

"The rules as currently stated would forbid that," he testified.

Stephen Graham, who said his son successfully went through conversion therapy, accused "sexual activists" who "celebrate homosexuality like a fad" of pushing the rule.

"Traditional moral values are being flushed down the toilet," he said.

McKrae Game, a former "ex-gay minister" from South Carolina who recently abandoned his efforts and came out as gay, spoke in favor of a conversion therapy ban.

"I believed I was helping people, but the reality is that I was causing harm in forcing the cycle of confusion and shame," he testified.

Maria Olsen told the judge that the proposed rules did not go far enough, particularly to include more protections for transgender youth and covering gender expression.

If the rule is passed, Gayle Ruzicka of the Utah Eagle Forum said there could be a legal challenge. She told FOX 13 she might also ask the Utah State Legislature to consider tweaking the rule.

Public comment is being taken until Oct. 15. The Utah Dept. of Commerce said it had received more than 1,300 written comments with 85% in support of the ban on LGBTQ conversion therapy. If nothing substantial changes, the rules will be formalized by Oct. 22.

Outside the hearing, Equality Utah Executive Director Troy Williams said he believed conversion therapy is on the wane as LGBTQ acceptance grows in the state. Still, he said the ban was needed to protect children in the state.

"We’re confident that if this rule goes forward as drafted, that we will see a reduction of suicides in our state," he said.