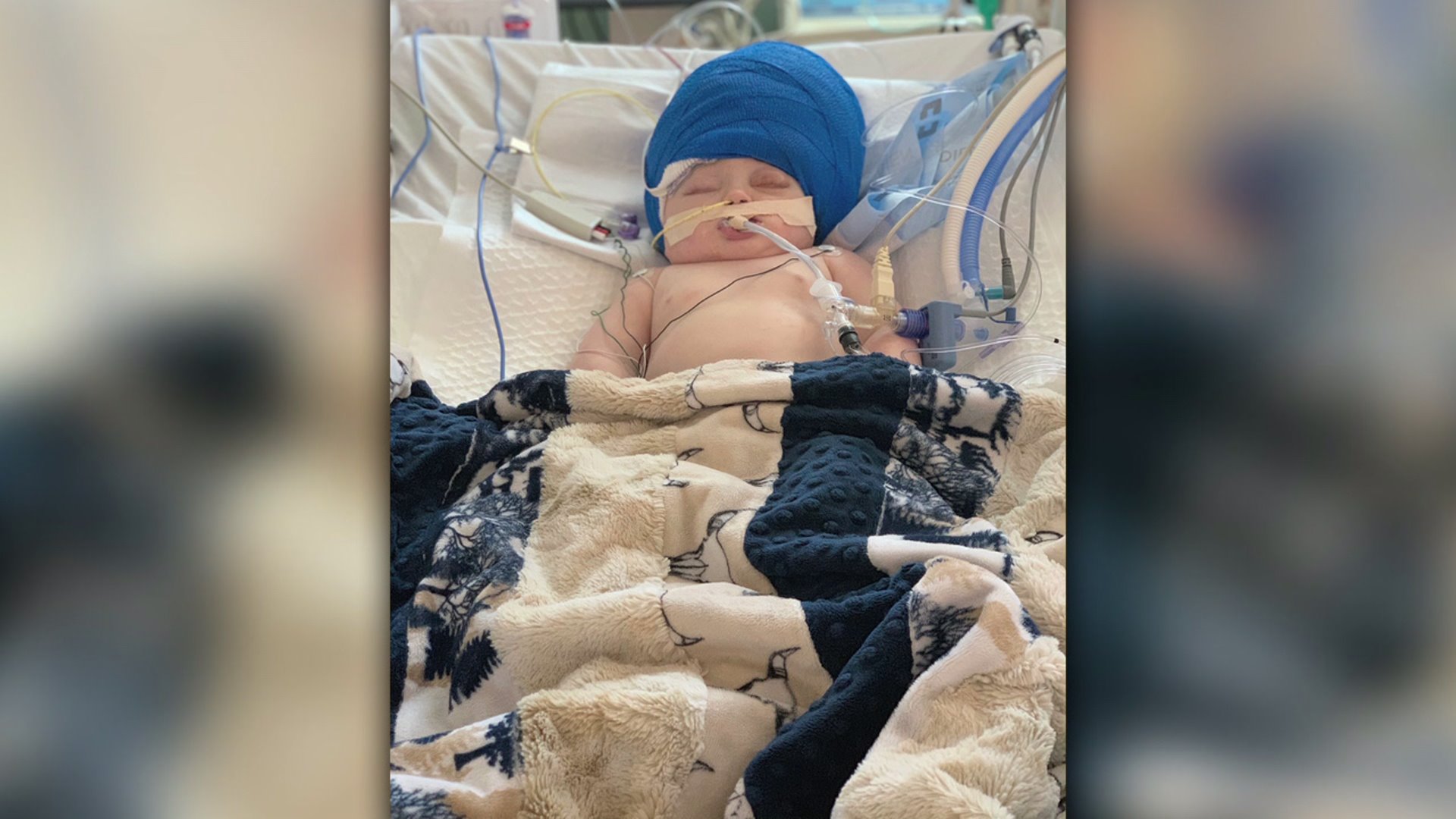 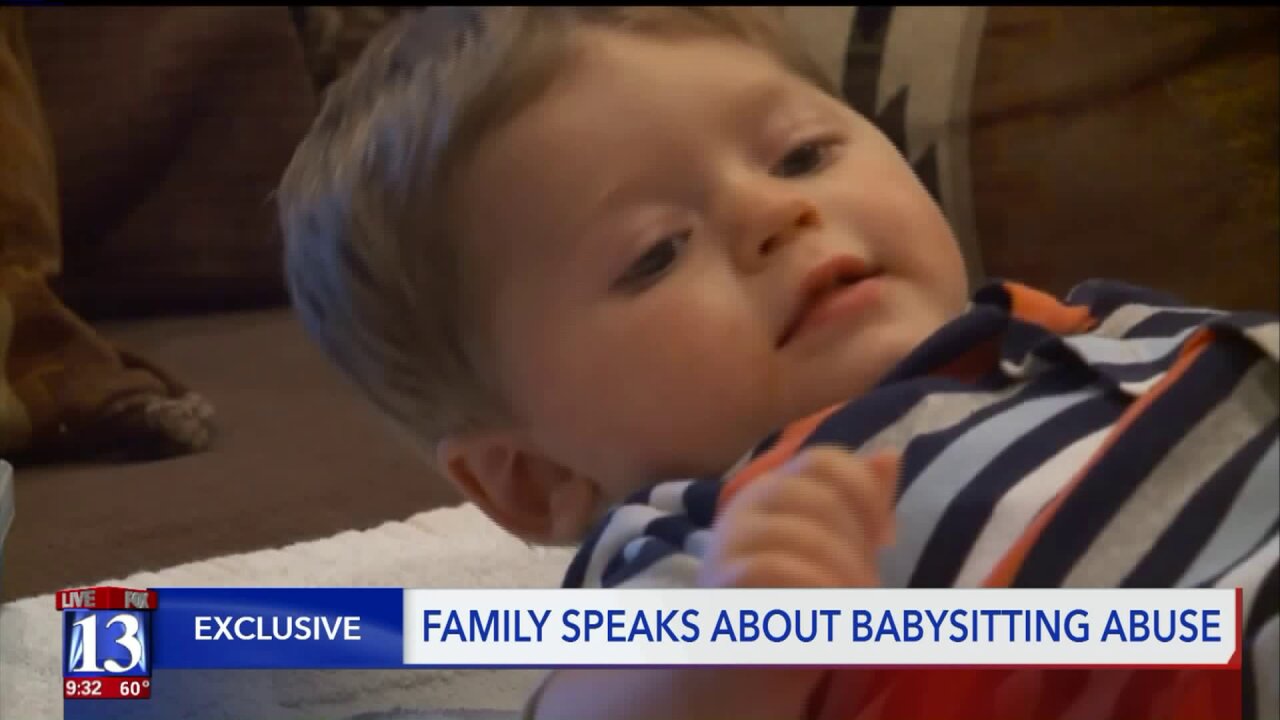 HERRIMAN, Utah-- The family of a baby nearly shaken to death is opening up about their boy’s injuries and recovery, one day after a judge handed down prison time to the woman who almost killed him.

Kelsey Briceno will serve anywhere from zero to five years in prison for the November 2018 incident where she severely abused baby Colter while watching him in her Magna home.

On Tuesday evening, Harlie and Zach Gonda started the nightly routine for Colter, calling him by his nickname Colt.

Zach strapped Colt into the high chair, and began to give him small pieces of graham crackers.

Like any typical baby, Colt tried to eat the crackers, and at times, banged them against the high chair tray to play instead.

But there was nothing typical about the other routine happening in the background.

Harlie lined up medicine bottles and syringe tubes on the kitchen counter. She filled the tubes with different colored liquid medicines, in various doses. She used a pill grinder to crush up small pills into a fine powder.

22-month old Colt can barely eat real food. He can’t talk, and he can’t walk. His parents plug a feeding tube into a permanent port in his stomach to give him nutrition. Harlie feeds him medicine every six hours the same way.

It didn’t used to be that way.

Last November when Colt turned one, he was running around and learning to talk. Videos show him pushing around toys while excitedly screaming, just like any other boy.

Two days after his first birthday, Harlie said she got a call from the woman babysitting Colt that he was hurt.

Colt ended up in the hospital, and Zach said doctors didn’t know if he would survive through the night.

“It was the worst night of my life, to hear that I might lose my son,” Harlie said.

At first, Colt’s babysitter Kelsey Briceno gave the story that Harlie and Zach’s baby boy had fallen down the stairs.

Not long into Colt’s hospital stay, the parents found out the situation was much worse than a simple fall.

“They pretty much broke the news to us that they were under a full swing investigation, because none of these injuries matched what was said,” Zach explained, of what the hospital told them.

Colt’s injuries, according to early reports, consisted of epidural and subdural brain hemorrhages to the left side of his head. Surgeons had to remove part of Colt’s skull in order to relieve the swelling.

Later, the truth came out: Briceno shook Colter, nearly to death. She told police that Colter wouldn’t stop crying, and in frustration she shook the baby “a few times at least,” according to court documents.

Colt suffered permanent brain damage, and was hospitalized for months. Harlie and Zach said Colt couldn’t even breath on his own at first.

“We were walking through any parents’ worst nightmare,” Harlie said. “That was my worst fear, of somebody harming my child.”

At the sentencing on Monday, the family found out a now pregnant Briceno is going to spend up to five years in prison.

“She made the choice to do this, and she needs to suffer the consequences,” Harlie said.

The couple explained how not only has Colt’s life changed forever, so has their lives as his parents. Harlie had to quit her job, they explained, to take care of Colt full time. They sold their home and moved in with Harlie’s parents because of medical debt.

Their son will never grow up in the way they imagined.

“We were robbed of teaching him how to ride a bike, how to throw a ball,” Zach said. “All simple life joys, that he will never get to have.”

Instead, they will spend their days trying to teach Colt simple functions, like how to swallow and eat.

They don’t know what his development will be like from here, or how long he will live.

“He has extensive amounts of therapy,” Harlie said. “We are really wanting to give him every opportunity and chance, to regain every little ounce of strength and ability that he lost.”

Out of everything, the family expressed the positive-- that Colt has so far surpassed what doctors thought he could achieve.

Harlie called him her miracle baby.

“We're his crowd to cheer him on,” she said.

“We're going to do all we can,” Harlie continued. “That's all we can do, is just help him along.”