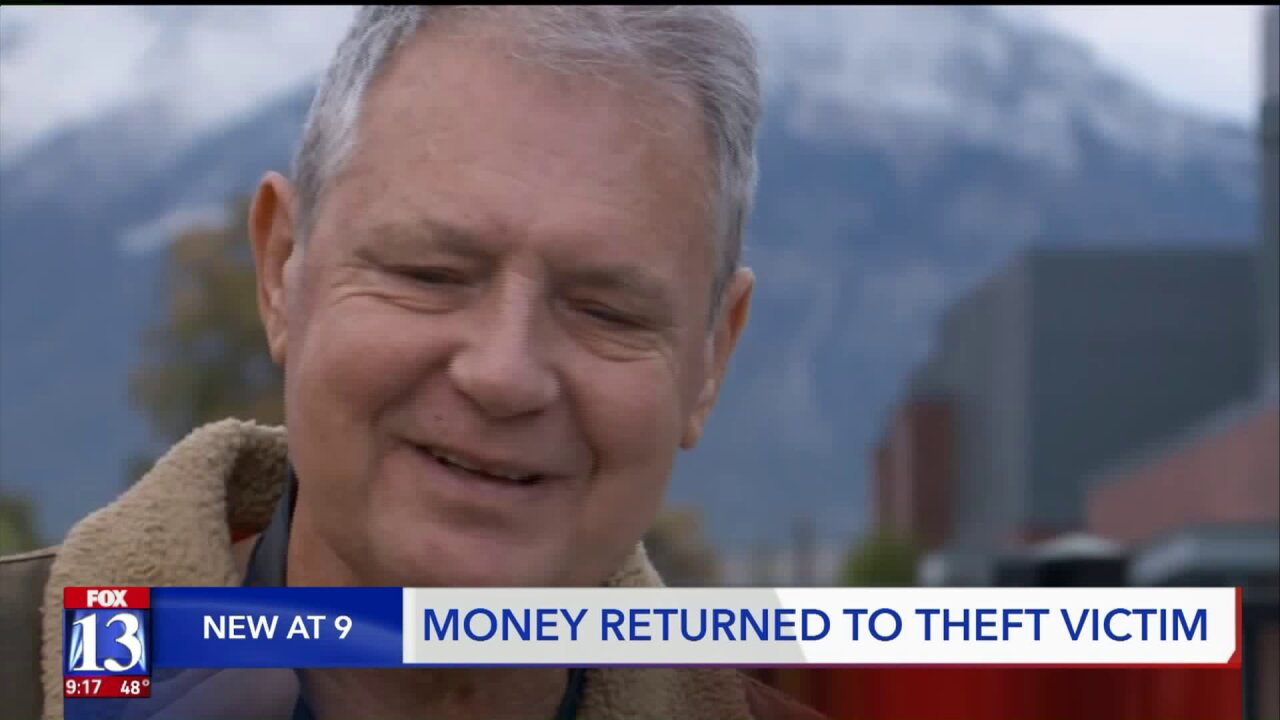 The group, "Addicted We Stand," had a very personal reason for jumping in to help.

Co-Founders Beau Carter and Brandon Allan said they know the two people accused of the crime, and wanted to make things right.

"I said, 'Well I don't read, I'm blind,'" Stewart recounted. "And then she went into a whole different mode and said, 'Well I also sell books on tape.'"

Stewart said the woman came into his home, though he felt that something was off.

According to Provo Police, Norton-Rushton found and stole all of Stewart's bank cards. Officers found Norton-Rushton and a man they identified as Edwyn York on surveillance at several locations where the cards were charged.

The two were arrested on charges that included exploitation of a vulnerable adult, theft by deception, drug possession and possession of drug paraphernalia.

Stewart said his bank detected the fraud and alerted him.

Carter and Allan indicated that they knew the answer, and met with Stewart on Tuesday to explain.

"Two of our members are actually the ones who did this," Carter said, of York and Norton-Rushton. Allan said it hurt seeing two people he knows take advantage of someone.

He and Allan said they, too, used to be addicts.

"All you care about is getting your next fix," Carter explained.

Addicted We Stand member Wendy Hobbs said reading about the fraud brought her back to where she used to be as an addict. She said she also knows York, and that he has done great things in his sobriety.

"We are not the people that we would normally be in our addiction," she said.

They wanted to help Stewart, so they began to raise money.

"I thought, what is a positive that we can get out of this? Because I felt so bad for this man he didn't deserve it," Hobbs said.

She said two hours after Addicted We Stand posted the fundraiser, members, and fellow recovering addicts, came up with the hundreds of dollars to replace what was stolen. Allan said it was powerful to see people who don't have a lot, want to give back.

They met with Stewart and gave him $500 cash.

"We want to give you back the money that was taken from you," Carter said, as he handed the bills over.

He then apologized for what happened.

"To have this group come along, and help me get back on my feet... it's unbelievable," Stewart said. "I really appreciate it."

Hobbs gave Stewart a hug, and he thanked her.

Allan said in addition to helping Stewart, they will also focus on helping York and Norton-Rushton. He said they already posted bail for York and got him into drug treatment Tuesday evening.

Their goal, he said, is to change the stigma about addicts and recovery.

Click here to learn more information about Addicted We Stand.