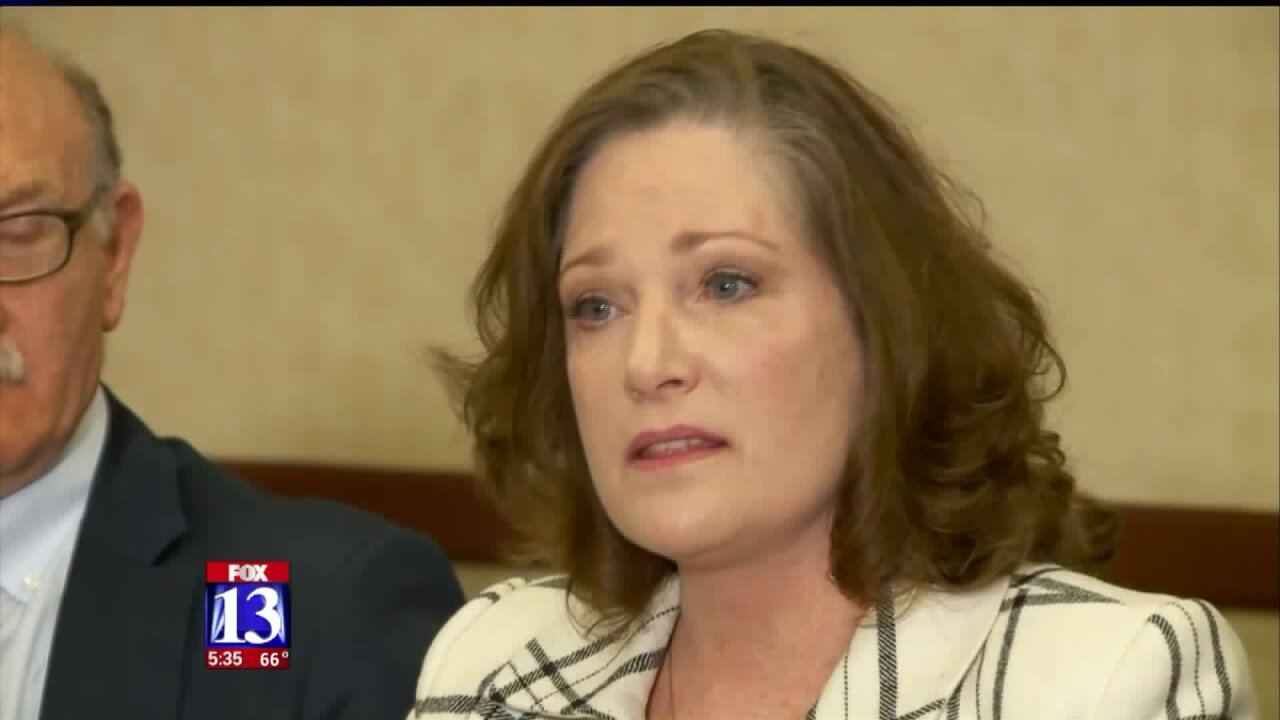 SALT LAKE CITY -- McKenna Denson exhaled softly as she looked out at the packed room of cameras, reporters and supporters.

Denson's recording of her confronting the former president of The Church of Jesus Christ of Latter-day Saints' Provo Missionary Training Center culminated Thursday with a news conference blocks from Temple Square. Denson and her attorneys discussed the lawsuit filed against Joseph Bishop and the LDS Church.

"The #MeToo movement is not the reason I sought out Joseph Bishop," she said. "I’ve been trying for 30 years -- three decades -- to get the truth from the church."

However, Denson said the movement gave her courage to confront him and record it. The recording was posted on the website MormonLeaks, where it launched criticism against the LDS Church and questions about whether it has done enough to protect victims of sexual abuse. On the recording, Bishop admitted to sexual misconduct with her and others, but denied a rape.

Denson filed the lawsuit against Bishop and the LDS Church accusing them of sexual assault and battery, emotional distress and fraud. She alleges the LDS Church had prior warnings about misconduct by Bishop, but ignored them and promoted him to be over the Provo Missionary Training Center.

Denson accused Bishop of luring her into a room, where she claimed she was attacked as a missionary at the MTC in 1984.

"When I was pulling up my pantyhose and trying to button my blouse or put myself together, he said to me, 'No one will believe you. Look at you. Look at me,'" she told reporters.

Denson insisted she had reported the abuse to LDS leaders, who did nothing about it. She said she followed up for decades and was unable to learn about what happened. Last year, she went to Brigham Young University police, whom she said had told her she had been raped.

A photograph of McKenna Denson as an LDS missionary (photo provided by her attorneys).

Settlement talks with the LDS Church were under way when MormonLeaks posted the recording. Denson said she did not give it to them. She insisted she was not anti-Mormon, but added: "I am absolutely against those who cover up sexual abuse."

Denson's attorney, Craig Vernon, said he was open to ongoing talks with the LDS Church.

"She wants justice, and second, she wants policy change," he told reporters.

The settlement talks also yielded a dossier on Denson prepared by church attorneys that included very detailed aspects of her life. Vernon said he did not fault church lawyers for doing that. Denson said she believed it was presented to her in an effort to silence her. She was blunt about her criminal record, but insisted she would not be shamed.

"I think the idea was it would intimidate me and scare me into silence. It did not," she said.

Denson's news conference drew some supporters, as well as critics of the LDS Church's policies, including Sam Young, who led a protest march over bishops' "worthiness interviews;" Crystal Legionaires, who disrupted General Conference by shouting "stop defending sexual predators" at church leaders; and Fred Karger, who has a long-running campaign against the church over LGBTQ issues.

"Everyone deserves to feel safe in their church whether they are a child or an adult and they should be open to making the changes McKenna is talking about," said Legionaires.

Bishop's family has not responded to a message from FOX 13 seeking comment. They have previously accused her of making false claims. Denson acknowledged she has had a criminal record.

"Yes, I do have things in my past that are shameful," she said bluntly. "But that does not take away that he raped me at the Missionary Training Center."

In a statement, the LDS Church did not comment directly on Denson's lawsuit.

"Our hearts ache for all survivors of abuse, and the Church is committed to addressing incidents of abuse wherever they are found. As this is now an active legal matter, we are unable to make further comment at this time. We are confident that the legal system will ensure a just result in this case," said church spokesman Eric Hawkins.

Recently, the LDS Church also made some moves to help safeguard against abuse, including allowing parents to sit in one-on-one meetings between a child and their LDS ward bishop.

Denson said she wanted policy changes, including the LDS Church requiring members to go to police first -- instead of clergy.

Denson said she is prepared to take them to court and endure depositions and discovery in the civil lawsuit. The statute of limitations has expired for any criminal case.

"I’m right. It happened. I was raped at the MTC. The Church covered it up and they still promoted him into higher and higher positions in the Church. Today, he is still an active card-bearing member of the Church. That means he has a temple recommend as far as we know," she said.

"The fact that I’m right, the fact that this might open the door for so many other victims to come forward? I’m ready."