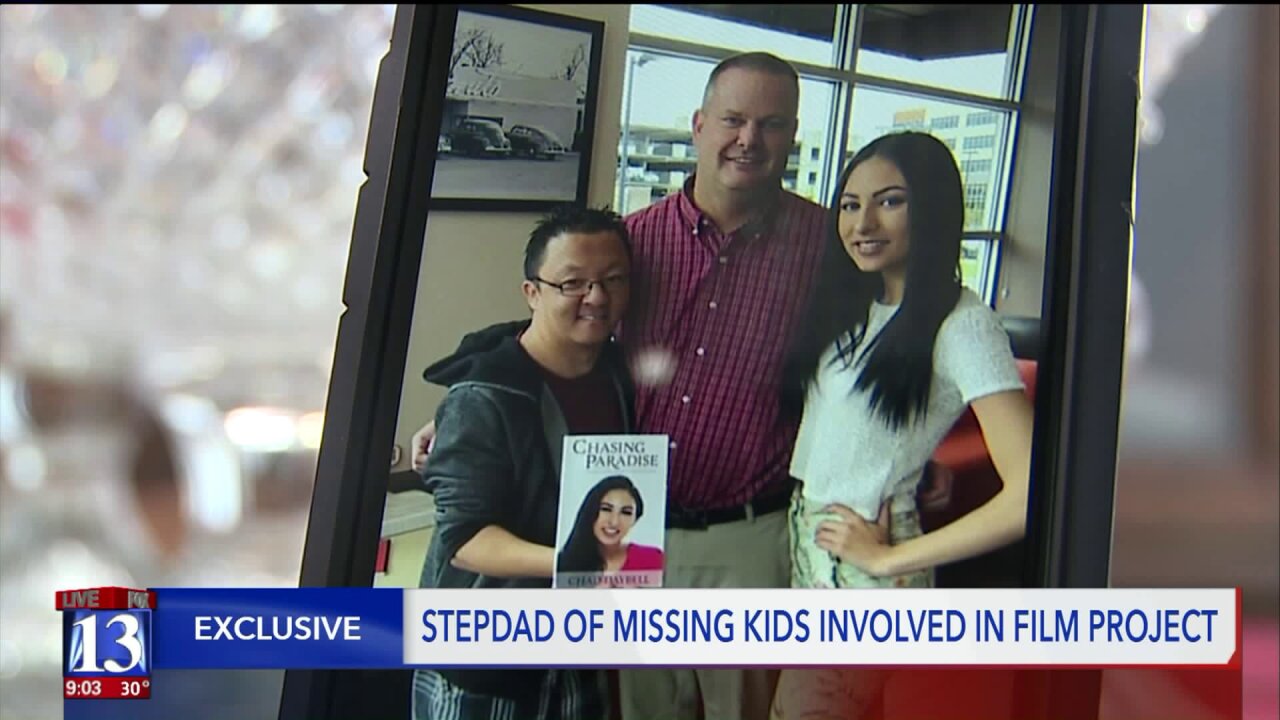 RIVERTON, Utah — An actress and a filmmaker who said they had been working with Chad Daybell are now sharing their experience with the author after finding out he's been implicated in the disappearance of his stepchildren.

Rexburg, Idaho Police said Monday they are still searching for 7-year old Joshua "JJ" Vallow and 17-year old Tylee Ryan, and they've run down every lead and carried out a number of search warrants in an attempt to locate the children.

They said the children's mother and stepfather Lori and Chad Daybell, continue refusing to cooperate with police. Police believe the couple has left Idaho, and are on the run.

For Valentina Yingling and Devin K. Hansen, it's shocking to see the news about Chad.

Valentina is the face on the cover of Chad's book, "Chasing Paradise." It took her by surprise when earlier this year her family saw Valentina's picture in the bookstore.

"They’re like, 'Hey is this you? Or do you have a twin?' I’m like, 'No, that’s me… where did you find that picture?'" Valentina said, of her confusion on why her picture was on this book.

She said it was a stock photo from a photoshoot she had done. Valentina explained she reached out to Chad, upon realizing the main character in the book shared similarities to her own life and family.

From there, the suggestion was thrown out to turn the book into a movie, with Valentina portraying the main character.

That led to a meeting in May, when Valentina said Chad came down from Idaho to West Jordan, to meet up with herself and local filmmaker Devin K. Hansen.

"He talked about how he was really interested in afterlife, and things like that," Valentina said. "That’s what his book is about."

Valentina and Devin described how they kept in touch with Chad after the meeting, tossing ideas back-and-forth, and sending Chad scripts to look over.

Things seemed normal, they indicated, until a few months ago when Chad went silent.

"September was the last time that we got a response from him at all," Valentina said.

She said he didn't reply to messages after that.

Devin pulled out his phone to look up the last text.

The next thing Valentina and Devin heard, Chad's wife Tammy had died in October. Condolence messages to him were never returned, they explained.

Now they're hearing that Chad and his new wife Lori are hiding from law enforcement, and won't tell police what happened to the two children.

Rexburg Police said after Tammy's death, Lori claimed her daughter had died some time ago -- which wasn't true. They also said Chad told people that Lori didn't have any minor children.

Police said Monday they think Lori knows where the children are and what happened to them, and that the couple isn't actually with the children. They publicly called on Chad and Lori to "do the right thing" and come forward with what they know about Joshua and Tylee.

Devin and Valentina are in disbelief. They even tried to call Chad a few days ago, but said he didn't answer.

"It was just kind of crazy," she said. "Unexpected."

Devin said he is in shock. The movie has been called off.

"We’re going to move on," Devin said. "We have another project in mind."

A new project that has nothing to do with Chad -- or his books.