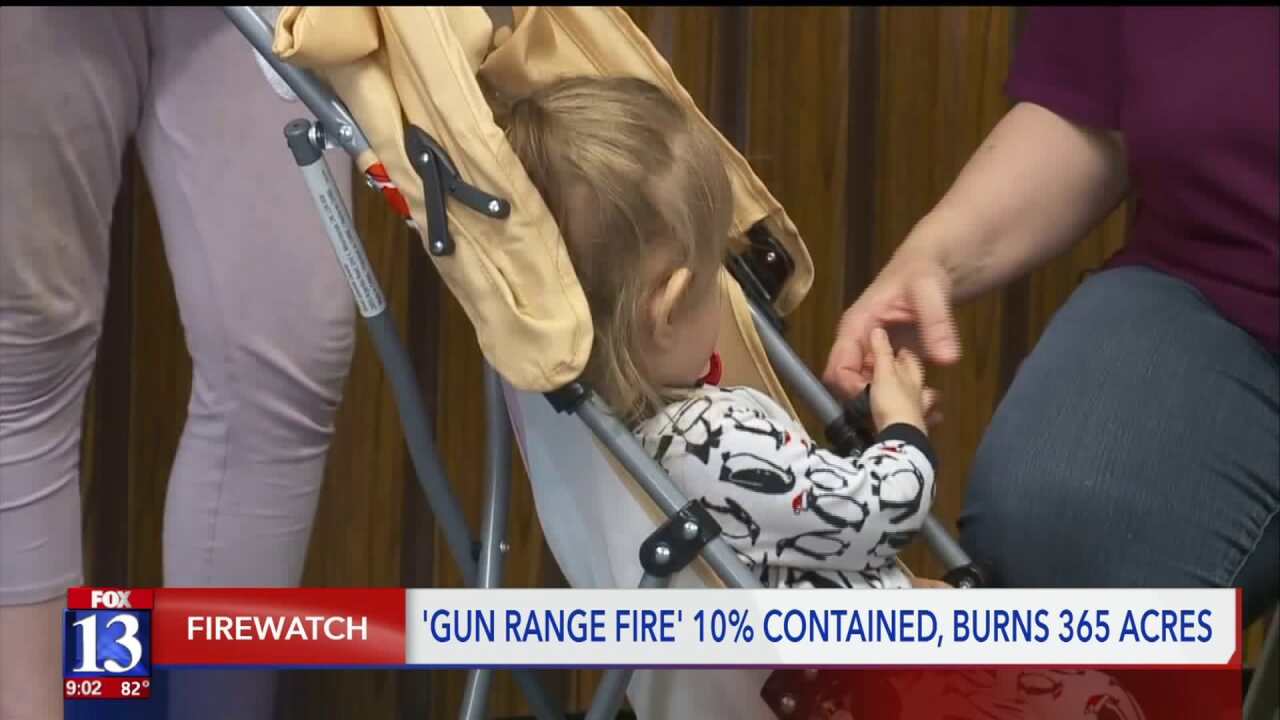 UPDATE: All evacuation zones will be lifted starting at 11 a.m. on Saturday.

BOUNTIFUL, Utah — Uinta-Wasatch-Cache National Forest officials believe the 365-acre Gun Range Fire was started by an abandoned campfire, and now they're looking for two people who may have started it.

Meanwhile, families living in more than 240 homes who had to evacuate because of the fire are hoping for the all-clear soon.

It has burned down three homes and damaged several others.

As fire crews battled the blaze from the air and ground, the Red Cross took in families and handed out snacks and water all day Friday.

Margarita Boggess, her boyfriend and two children spent the day at the shelter.

They've been taking things "minute by minute" since evacuating in the middle of the night.

Her daughter Senua is a year and a half year old. It was clear the toddler was getting antsy.

"She's like wiggle worm over here," Margarita said, handing the squirmy baby off to her boyfriend David Willis.

They're trying to stay sane, while stuck in the shelter. Senue burst into tears and began to cry, as toddlers will do.

"She's sleepy and tired, and we're not at home," Margarita said.

Their last view of home was leaving just after 1 a.m. as flames burned closer in the dark.

The family of four left so fast, they didn't even have time to grab their three cats.

"I didn't even think about them when we were heading out the door, because I was more concerned with how close the fire was," Margarita explained. "I went into instant, 'Holy crap, we need to go now!'"

That's how it was for hundreds of other people, who rushed to evacuate while wind fueled the furious flames.

As soon as daylight hit, wildfire crews began a plan of attack.

U.S. Forest Service spokesperson Kim Osborn explained that crews worked by ground and air. They lit a back burn on one side of the fire and built containment lines elsewhere. She said they also dropped retardant to try to box the fire in.

By Friday evening, it was clear the fire was no longer as intense as it was several hours earlier.

"Still a chance of some flareups," Bountiful Police Lieutenant Troy Killian said. "We've got utility companies still working out in that area."

Because of safety and fire concerns, he said people need to stay away from the evacuation zones.

As of Friday night, everything north of 900 North and east of 900 East remained under the evacuation order.

Lt. Killian said they had fingers crossed for good news Saturday. He hoped to be able to announce if they could lift the evacuations.

For now, Margarita and her family are relying on the Red Cross.

"I know you're getting impatient, huh," she said, looking down at a restless Senua.

They had almost no belongings with them, and made a trip to the store to buy clothing.

She said she was trying her best to stay strong, for the kids.

The whole whirlwind of an ordeal, and devastation-- thanks to what the Forest Service thinks was someone's campfire.

Uinta-Wasatch-Cache National Forest officials said they are looking for two people who may have been driving a small SUV on the B-road above the gun range around 1 a.m. Friday.

Lt. Killian expected to announce an update on evacuations around 8 or 9 a.m. Saturday morning.