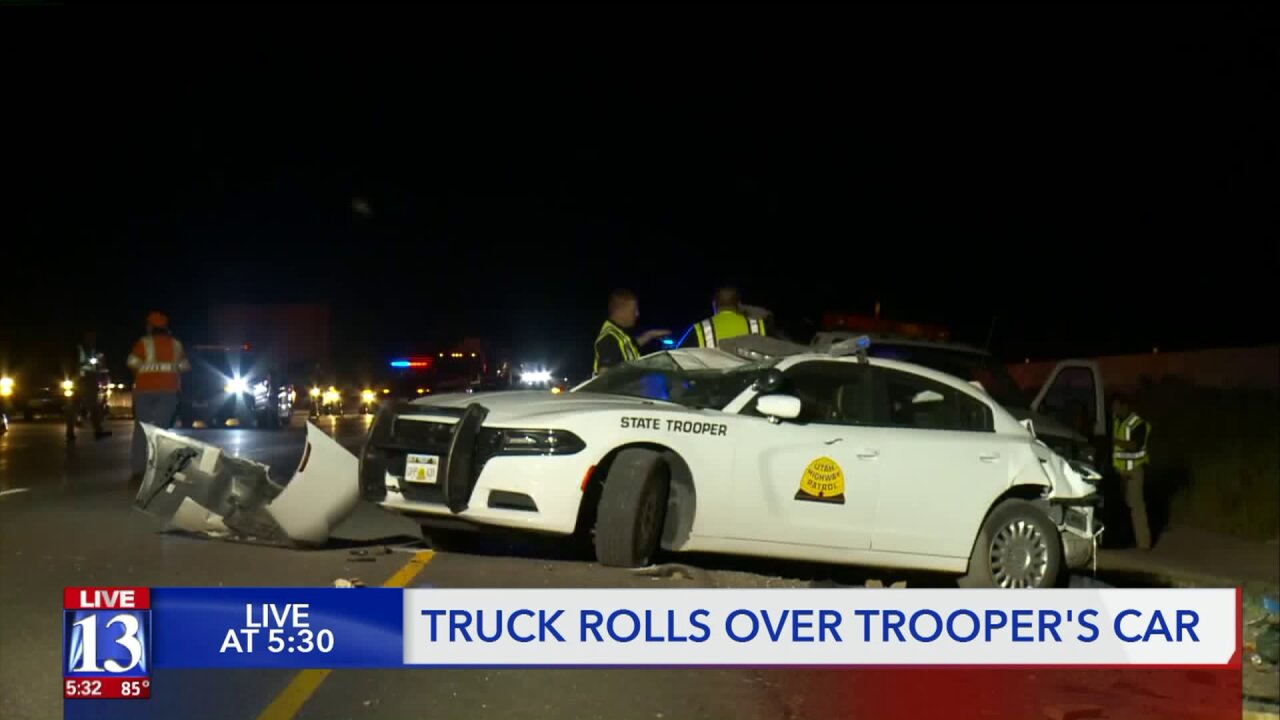 SALT LAKE CITY — Utah Highway Patrol released the dash camera footage Monday from a crash that could have been deadly for one trooper.

Pulled to the side of Interstate 80 in Parley’s Canyon Sunday night, Trooper Riley Rugg’s patrol car was hit while he was helping another person who had crashed earlier.

“On the highway, our vehicles are usually the safest place to be,” Rugg said. “But in that moment, I was glad I wasn’t sitting in there.”

Rugg was talking with the tow truck driver on the earlier scene when he heard a crash, then watched as a pick-up truck rolled and collided straight into his patrol car.

“It was flying through the air," Rugg said. "It didn’t go over me, but it did go over my car."

The driver, a 23-year-old woman, was ejected from the truck while debris from the impact hit Rugg in the leg and foot — he stood 15 to 20 feet away from where the truck landed.

“It hit the top of my foot and my shin, and it did take my legs out from under me,” he said.

Getting back up, the 22-year-old trooper’s thoughts went immediately to the passenger sitting in his patrol car.

“The door was smashed shut, so we had to get the fire department to extricate him from my vehicle,” Rugg said.

The passenger was with Rugg because he was in a crash earlier — they were investigating and waiting for a tow truck to help them pull out his own vehicle, which rolled about an hour earlier.

“After rolling his vehicle and then being crashed while sitting in my car, I think it was a bit of an unbelievable situation for him,” Rugg said. “I think he was at a loss for words.”

With the speed of the pick-up truck driver, it was an absolute miracle that Rugg and his passenger made it out alive with only minor injuries.

“It’s miraculous that he’s actually working today,” said Maj. Steven Winward, an administrator at UHP. “I was surprised to see him here in uniform.”

Winward said Rugg has only been with UHP for nine months, but unfortunately, incidents like this are becoming more common.