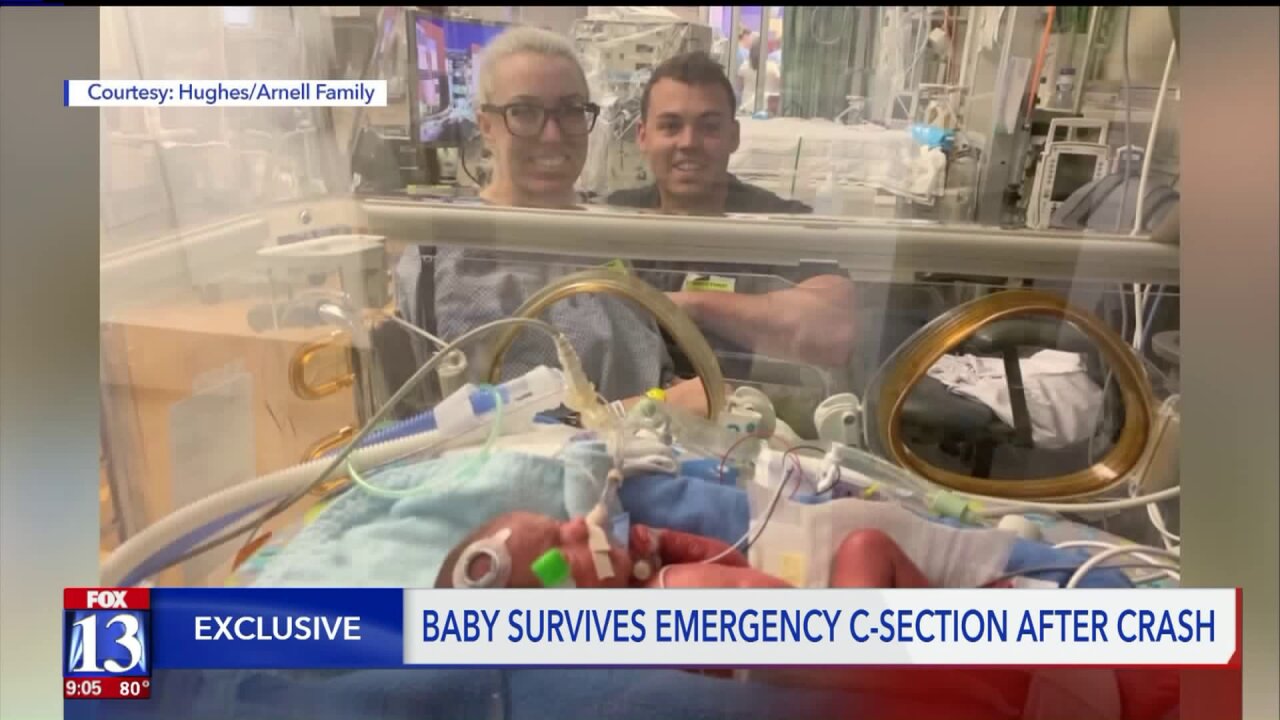 SALT LAKE CITY — The husband and father of a pregnant Utah County woman hurt in a crash are sharing pictures and video of what they’re calling a miracle.

The pictures and video show a 2 pound, 8 ounce Beckham Hughes in an incubator and hooked up to tubes, as his mother meets him for the first time.

This isn’t how the Rachel and Hunter Hughes imagined welcoming their firstborn child.

“It’s not the exact circumstances in the way you'd like to first meet your son,” Hunter said. “So, it was really hard.”

Rachel was 27 weeks pregnant when Hunter said she felt sick at work and came home to grab her laptop Thursday morning.

He said she texted him before she left for home. Not too long after that, he got a call from her phone. When Hunter answered, a man on the other end of the line told Hunter that Rachel had been in a crash.

Hunter immediately drove to where Rachel crashed in Eagle Mountain. He found out Rachel had blacked out and passed out while driving, slamming into a rock wall. He explained that her medical issue was likely pregnancy-related.

“Within 30 minutes, it's an emergency C-section and your world turns upside down,” Glen said.

Upside down, and unsure if Rachel and baby would be okay. Hunter said every time he checked with hospital staff, they told him to wait another hour.

“You're just going, ‘What exactly is the status? What is going on?’” Hunter said, of what was going through his mind the whole day.

Finally that evening, they received good news: Baby Beckham seemed to be doing okay. Hunter said Beckham was bruised and beat up from the crash.

“It was still a really violent wreck,” he said.

Hospital staff let Hunter into the room to meet Beckham. Later on, Glen and Rachel entered the room, to see her son.

Glen recorded video of the first moments she laid eyes on Beckham. Sitting in a wheelchair, Rachel begins to sob as she reaches her arm in the incubator.

Beckham’s tiny hand grabs Rachel, and he clings to her finger.

"He's gripping me," a teary-eyed Rachel says, looking up at her dad.

“I'll tell you what, that was a sweet moment,” Glen said, in an interview on Saturday. “That little guy grabbed her little pinky, and he started to squeeze it. And the nurses came up and they said, ‘If you look at the monitor, he is responding to his mother.’ He knew his mother. And that was… that was neat.”

The next morning, Hunter and Rachel got to see Beckham together, and take their first photo as a family.

Hunter recorded a video of Beckham again wrapping his hand around Rachel’s finger.

"You're doing so good, baby,” Rachel says in the video, to Beckham. “You're breathing so strong, all on your own."

“It was a really special moment,” Hunter said. “Although difficult, I wouldn't trade it for anything.”

Both Hunter and Glen expressed how grateful they were for a Good Samaritan named Ty Shiffler who helped Rachel in the moments after her crash.

Hunter said they aren’t sure yet when Rachel will be released from the hospital. She's having difficulty with mobility and walking, Hunter explained. He said Beckham will likely stay hospitalized until September, when he would have been born.

Glen said a test next week will check for any blood ruptures in Beckham’s brain. If the test shows no ruptures, Glen said Beckham will have every ability to be normal and healthy.

Anyone who wishes to help the Hughes family, as Rachel and baby Beckham recover, can do so through this GoFundMe online fundraiser.