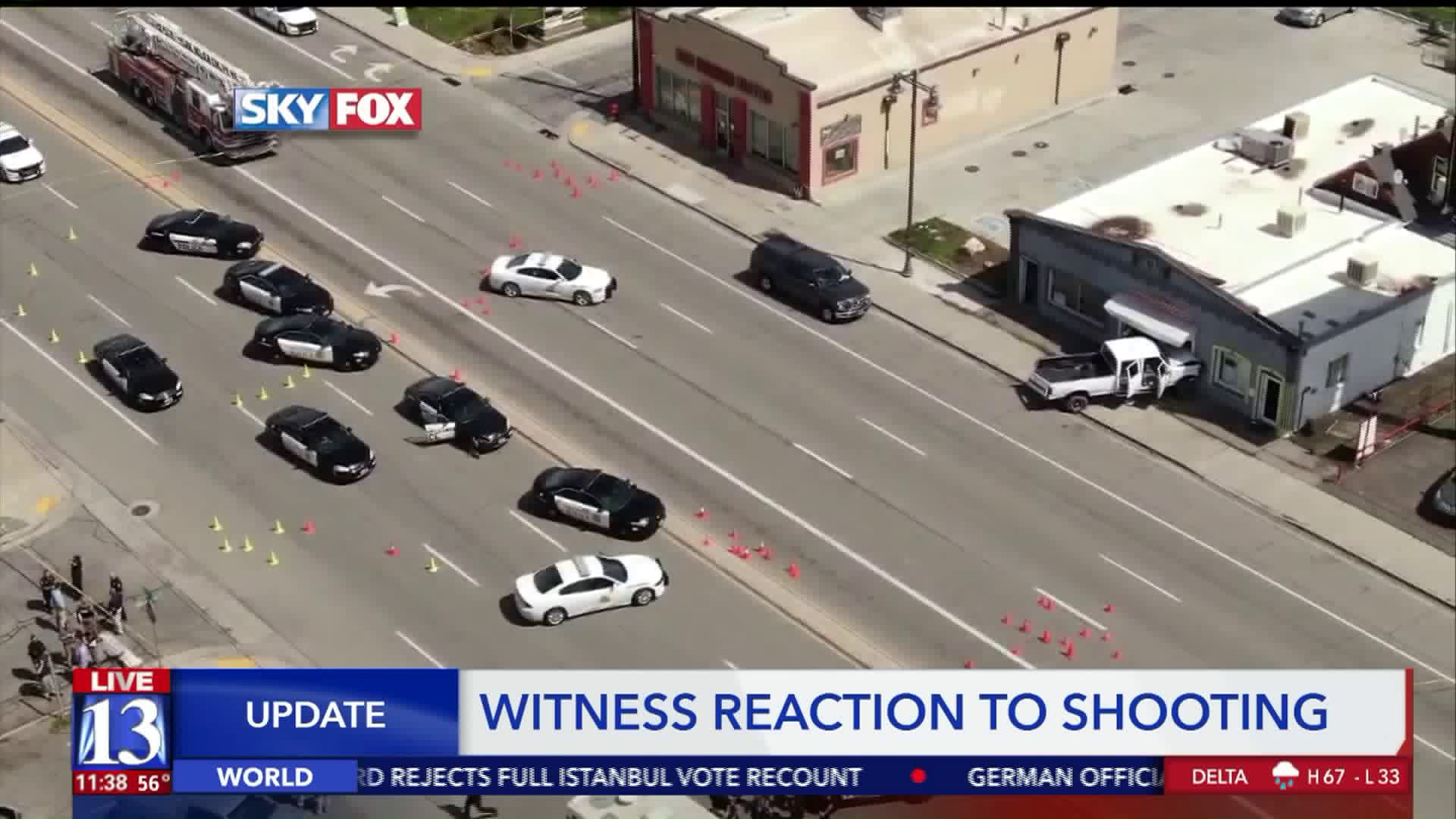 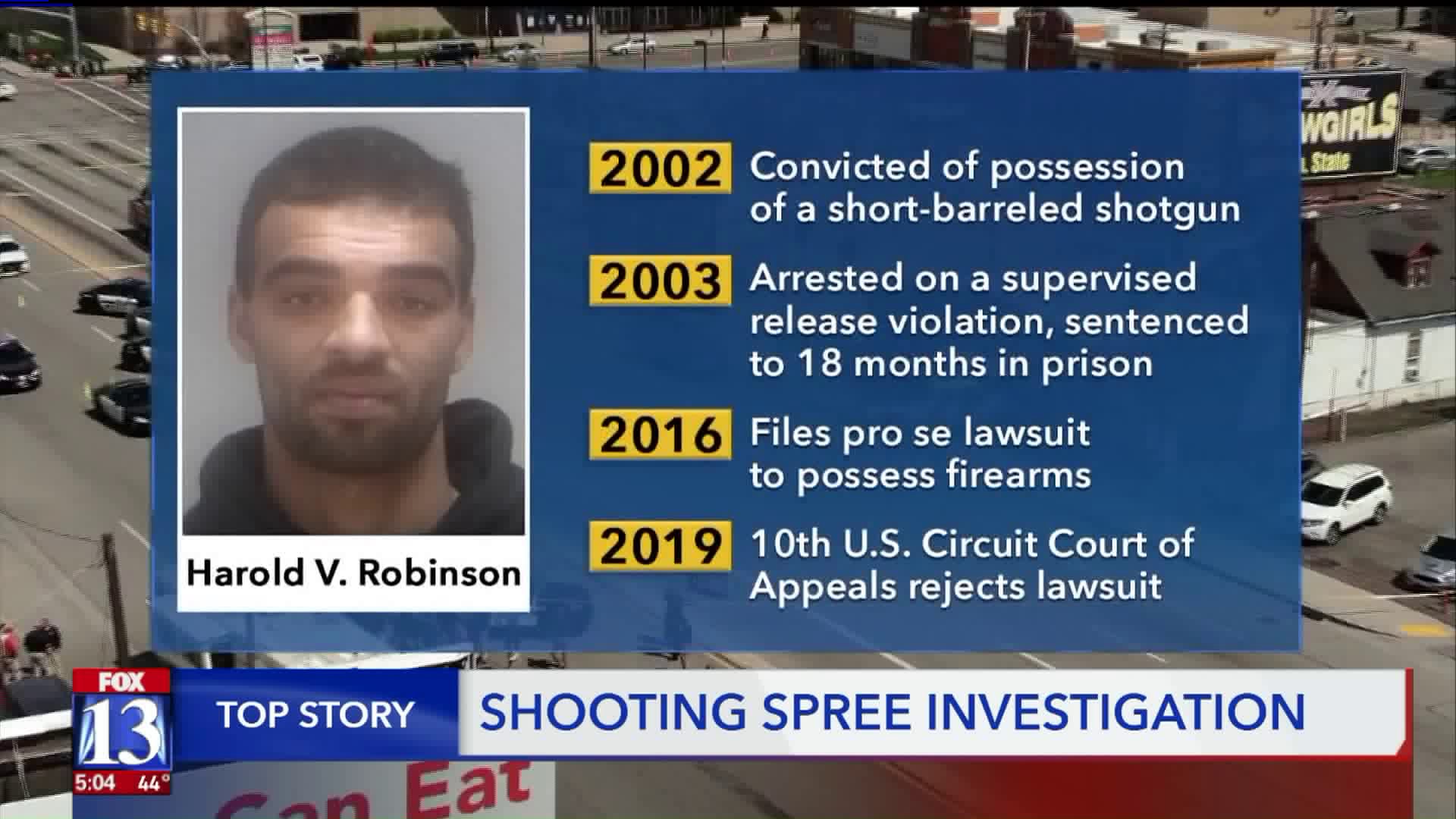 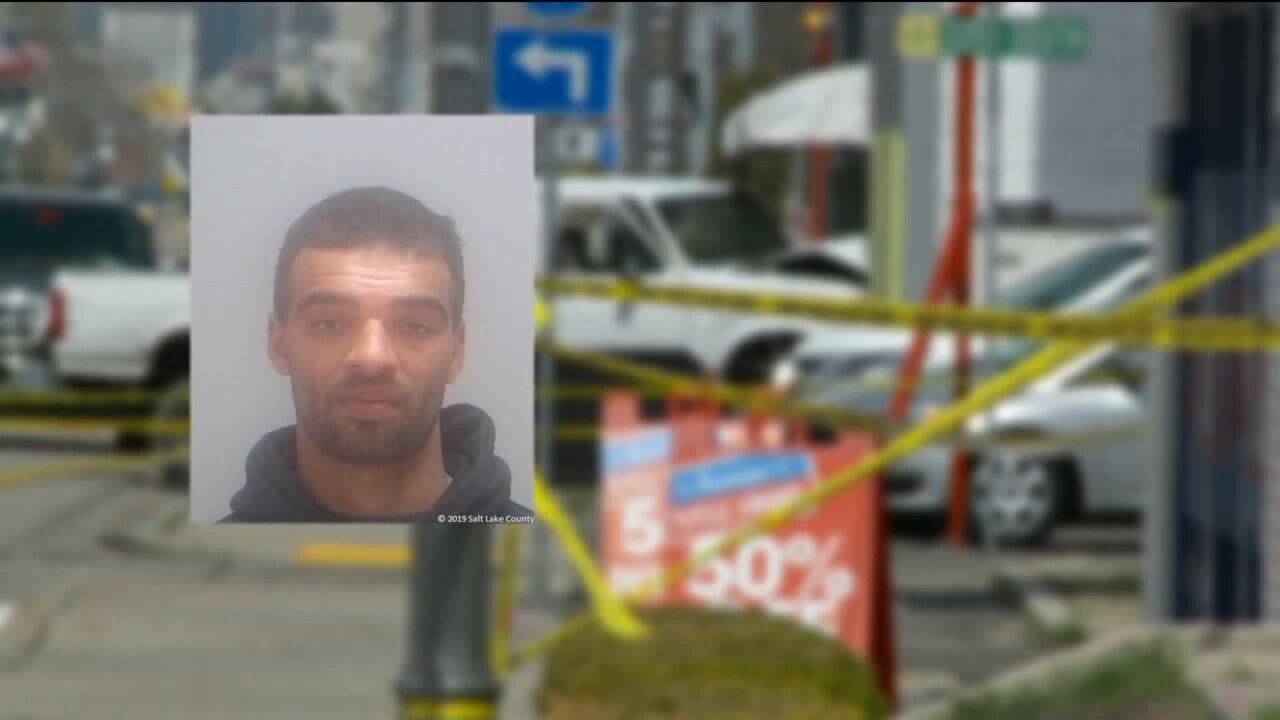 SALT LAKE CITY -- Fifteen police officers are on leave as an outside agency investigates a mass shooting rampage through downtown.

Salt Lake City police announced on Tuesday that 10 of its officers, two Unified Police officers and three Utah Highway Patrol troopers are on leave while Monday's shooting spree and chase is being investigated. The officers are believed to have shot and killed Harold V. Robinson after his car was struck by a patrol car during the case and ran into a South Salt Lake tailor shop.

"I think we're all incredibly fortunate someone didn't die yesterday," Salt Lake County Sheriff Rosie Rivera told FOX 13. "I believe his intent was to kill people or he wouldn't have been doing what he was doing."

"I can't think of a worse scenario: an active shooter scenario and you have someone driving through the downtown metropolitan area of Salt Lake City, firing rounds with impunity," he said.

At a news conference on Tuesday, police acknowledged they do not know the gunman's motivation. They updated the timeline of events.

The first call to 911 came in from Taylorsville after a convenience store robbery at 10:05 a.m. Monday. Then, a robbery was reported at a 7-11 in Millcreek at 10:37 a.m. A short time later, calls came in downtown. First, a shooting at the Sheraton Hotel near 500 South and 200 West; then at 100 South and Main Street where downtown office workers were sent scrambling for cover.

A woman told FOX 13 she was nearly hit by a white pickup after hearing gunshots near 200 South and State. Witnesses saw a man in a white pickup stop in the middle of the intersection outside the Matheson Courthouse at 500 South and State, get out, and fire a number of shots in the air. Police pursued the vehicle down State Street.

"From that point on, it was reported he was firing back at the officers going down State Street," Chief Brown said.

The chase ended when an officer performed a maneuver to stop the truck and it crashed into Princess Alterations near 3300 S. State Street. Robinson was shot and killed by police.

When FOX 13 knocked on the door or Robinson's home in West Valley City, a woman opened an upstairs window and motioned to leave the property. Outside the tailor shop in South Salt Lake, family members had apparently placed flowers and a poster as a memorial to him.

"We saw him as a violent guy. That proved to be true," U.S. Attorney for Utah John Huber said in an interview with FOX 13 on Tuesday.

Robinson had been convicted in 2002 for possessing a sawed-off shotgun and given probation. In 2003, he was ordered to serve 18 months in prison for a violation of his supervised release.

In 2016, acting as his own lawyer, Robinson sued the federal government demanding to be allowed to possess a gun. Earlier this year, the 10th U.S. Circuit Court of Appeals in Denver rejected it.

Huber told FOX 13 that federal authorities will look into how Robinson came to be in possession of the gun he had, described by some witnesses as an assault rifle. Police confirm it was a "long-rifle." The U.S. Attorney's Office would not rule out charging others if laws were broken.

"For him to have the type of weapon that he did yesterday, how did he come into possession of that?" Huber said. "Obviously, he was in violation of the law. Were others in the story of that gun?"