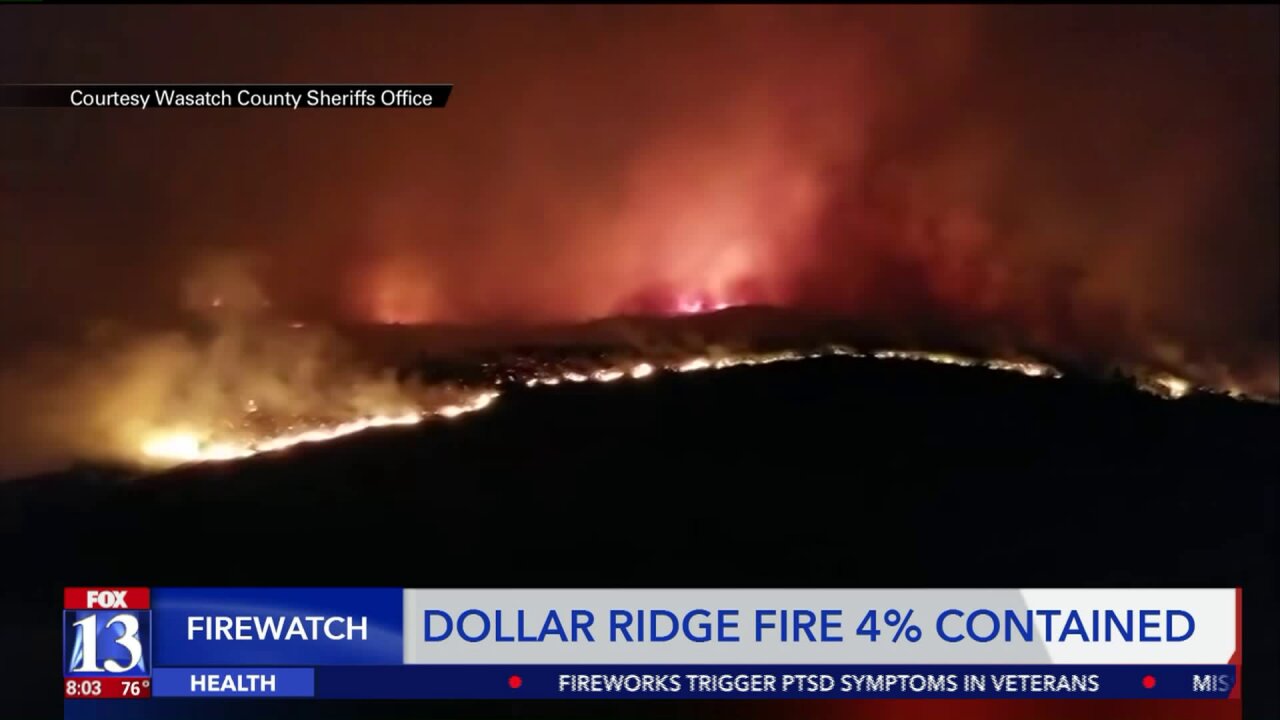 Thursday morning the Dollar Ridge Fire was estimated to have burned more than 42,000 acres while containment is at 4%.

According to a state report released by the Garfield County Sheriff's Office, 90 homes have been destroyed and approximately 1,000 homes are threatened.

A map of the perimeter of the Dollar Ridge Fire as of July 5, 2018. Image courtesy Duchesne County Sheriff's Office.

The sheriff's office also posted instructions for residents with property located within the evacuated area regarding the opportunity to briefly access their property. Those with property located east of Big G convenience store on US 40 south of the highway can come to the command post at milepost 69 and check in with deputies.

Those with properties deemed safe to access will be allowed to enter the evacuation area and must check in again when they exit. All persons must exit the evacuation zone again by 1 p.m. MDT Thursday. Specific details are available here.

US-40 remains closed between Duchesne and Wasatch Counties, and the Duchesne County Sheriff's Office says they do not know when the road will reopen.

Later Thursday the sheriff's office posted another reminder about the closure:

The Utah Department of Transportation states the closure affects both directions between mileposts 50 and 85. Drivers can use State Route 35 or US Highway 191 as an alternate route.

According to a state report posted by the Garfield County Sheriff's Office, access into Camelot on Strawberry River Road has been closed, as well as access into Timber Canyon from all directions.

The sheriff's office states the area from Currant Creek Junction to Upper Red Creek Road—everything from Big G convenience store west—on the north side of US-40 remains under a pre-evacuation notice.

Deputies spoke with firefighters overnight, and they say as of 5:52 a.m. Thursday evacuations in that area are not needed. The sheriff's office says they will notify those residents should an evacuation be necessary.

The portion of the fire that crossed US-40 overnight is burned Thursday morning on the south side of Currant Creek Road in Wasatch County, and deputies on scene say the fire has not yet reached the road.

All of the previous evacuation orders for areas on the south side of US-40 remain in effect, and the public is asked not to enter the area.

Nearly 1,100 people have been evacuated. Evacuations include, Beaver Canyon and Timber Canyon subdivisions, all areas east of Lower Creek Road and North of Strawberry River, as well as all areas on the east side of Strawberry Reservoir to just west of Starvation Reservoir on the south side of Highway 40, according to a state report released by the Garfield County Sheriff's Office.

According to a state report released by the Garfield County Sheriff's Office, there are shelters in place for residents and pets.

A shelter managed by American Red Cross is open at Duchesne High School, the report released by GCSO states that the grounds are also open for tents and RVs.

A pet shelter, managed by a local animal control unit, is running at the county fair grounds for household pets, as well as livestock, according to the report released by the GCSO.

An evacuation center (which is independently managed) is also open at Fruitland LDS Church, according to the state report released by GCSO.

Oil, natural gas and power line infrastructure are at risk, according to a state report released by the Garfield County Sheriff's Office.

Moon Lake Electric Association said Thursday morning that they decided to deenergize Strawberry Valley due to concerns about a transmission line in the path of the fire. The MLEA says the interruption in power service includes all of Strawberry Valley, Daniels Summit Lodge, Strawberry Bay Marina and all cabins and homes located in this area.

Crews are surveying the damage and the power lines in the area Thursday, after which the MLEA hopes to provide an update on a timeline for restoration.