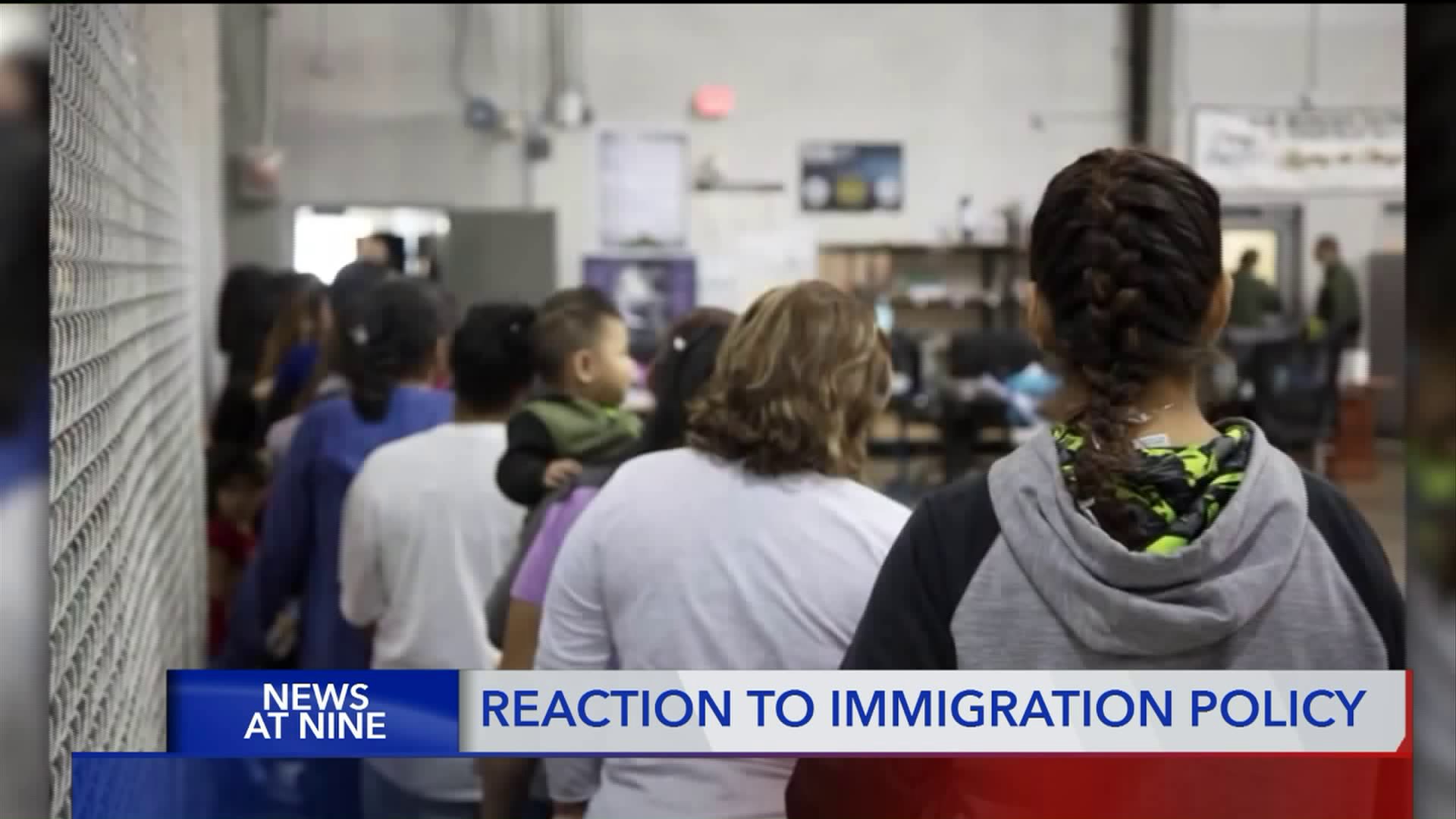 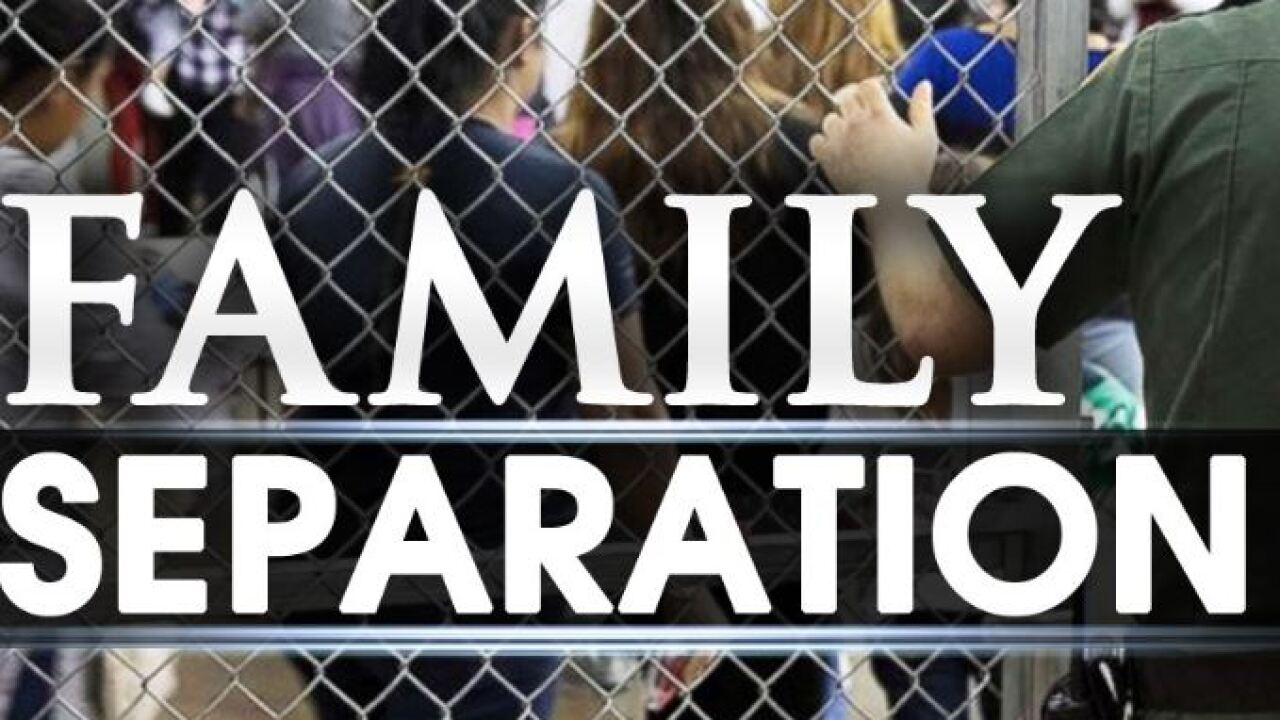 While there is no law mandating the separation of families, the zero-tolerance policy calls for the prosecution of all individuals who illegally enter the United States.

The policy separates families at the border, because parents are referred for prosecution and children are placed with a sponsor such as a relative or foster home.  In many cases, the juveniles are held in shelters.

The new comments follow former First Lady Laura Bush's opinion piece in The Washington Post Sunday that called the policy "cruel and immoral," and a comment from Melania Trump's spokesperson that the current First Lady "hates to see children separated from their families."

“The Administration’s horrible 'zero tolerance' policy has unnecessarily separated children from their parents, and I firmly oppose it. As a mother of three children and daughter of immigrant parents, this is something that’s both very tangible and heartbreaking to me. This is not a partisan issue – it’s an issue of right or wrong.

The Administration should change its policy immediately and Congress must act to address systematic problems. Personally, I have worked, and will continue to work, to ensure that U.S. law prevents family separation going forward. Just last week, I spent hours meeting with colleagues to push for a solution to this issue in the House’s compromise legislation.

I have been at the forefront of pushing for action on broader immigration reform this Congress and you can be assured that I will continue to work towards real solutions that reflect Utah’s values.”

“While I recognize the difficulty the last two administrations have faced with regard to families illegally crossing the border, I wholeheartedly agree with the President’s comments that a policy that leads to separating children from their families is wrong. I am working with colleagues in both houses on a path forward that recognizes the need for compassion for children and families without incentivizing illegal border crossings. That solution can and should be bipartisan.”

Monday afternoon, the Church of Jesus Christ of Latter-day Saints issued a new statement regarding the zero tolerance policy and linked to a past statement on immigration.

“The Church of Jesus Christ of Latter-day Saints has long expressed its position that immigration reform should strengthen families and keep them together.

The forced separation of children from their parents now occurring at the U.S.-Mexico border is harmful to families, especially to young children.

We are deeply troubled by the aggressive and insensitive treatment of these families.

While we recognize the right of all nations to enforce their laws and secure their borders, we encourage our national leaders to take swift action to correct this situation and seek rational, compassionate solutions.”

The Most Reverand Oscar Solis, Bishop of the Catholic Diocese of Salt Lake City had this to say:

"I join my brother bishops in the United States Conference of Catholic Bishops in urging the administration to rescind these policies that tear at our core values as a nation. The United States has long upheld the family as the core unit of civil society.  We are, and must continue to be, a beacon of hope for families unable to find basic protections and pathways out of poverty within their home countries.

While the U.S. has a right to protect its borders, it has a moral obligation to do so through means that preserve families and the dignity and sanctity of all life. Refusing asylum to women escaping from domestic violence and separating children from their parents is an unnecessary and aggressive act against human life, and unfathomable from a country with a heart as strong as ours.

For decades, the U.S. bishops have advocated for sensible reforms to our long-broken immigration system.  I now not only urge our members of Congress to implement reforms, but implore this nation to enforce existing laws with compassion, with recognition that we are the last hope for so many, and with the full understanding that individual human lives are at the heart of immigration issues."

“I, like so many Utahns, am extremely troubled by news reports of small children being separated from their parents at our southern border.  I share Utahns’ frustration and am committed to finding a solution.

Although I recognize the need to enforce our nation’s immigration laws and to secure and protect our borders, I do not believe that separating families is consistent with who we are as a country—and it most certainly doesn’t reflect the Utah values I was elected to represent in Congress.

I want all Utahns to know that I, along with my entire staff, am doing everything possible, both in Washington and here at home in Utah, to ensure that our government has the tools needed to keep families together.

My staff and I have been in contact with the Department of Homeland Security (DHS) to be briefed on the situation unfolding at the border.

Tomorrow, I will join several of my House colleagues for a meeting with President Trump, where I plan to push very hard to see that the Administration takes every effort to keep families together through the legal process determining their eligibility to remain in the U.S.

Additionally, the House will likely take a vote this week on immigration reform legislation that includes an authorization for DHS to keep children with their parents while the government determines their eligibility for asylum or if these families will be returned to their home countries. I’m committed and will keep at it until we get this solved.”

"It is inhumane to forcefully and unnecessarily separate children from their parents. Let’s get past the blaming and shaming, halt this cruel policy, and find common sense federal legislative solutions.

I have urged Utah’s Congressional delegation to pursue solutions posthaste."

The NAACP Salt Lake Branch also released a statement on the policy.

"The NAACP is appalled by the Trump administrations zero tolerance policy and the separation of children and their parents. This inhumane treatment locking children in cages and treated like animals should not be tolerated by Americans. If we do not speak up against injustices in our country, history will be repeated. We are a country with morals."