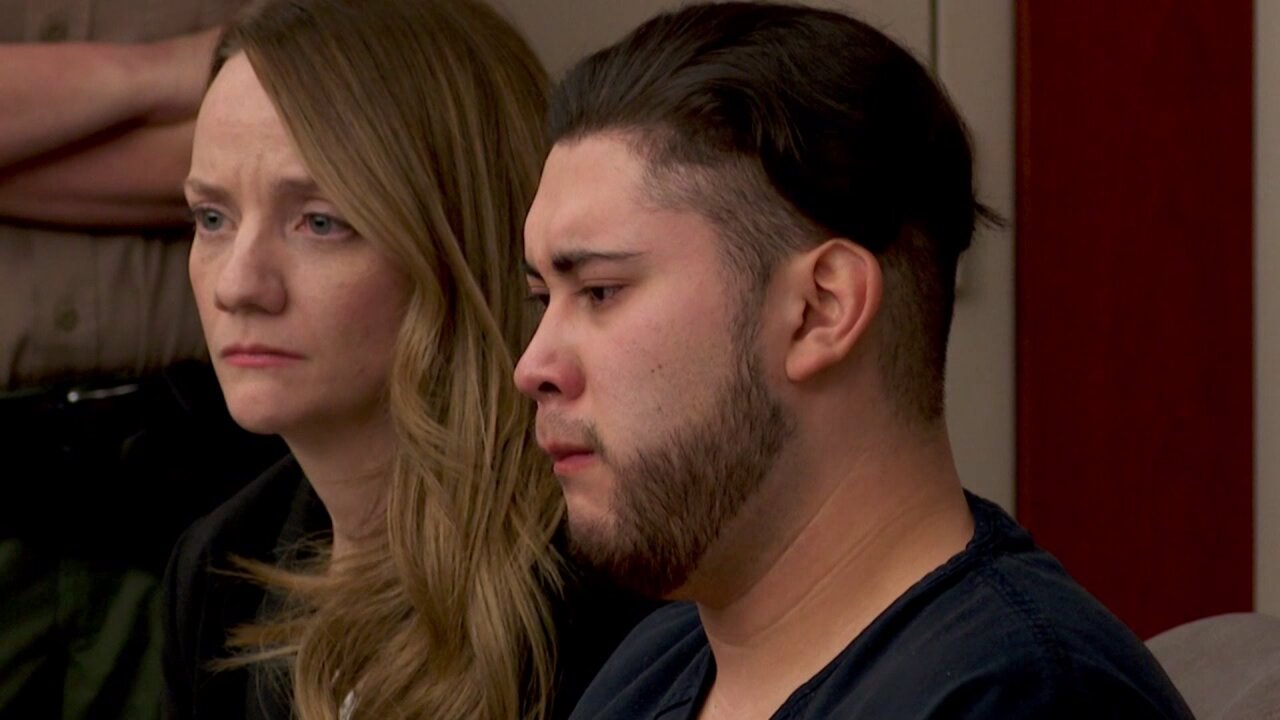 SALT LAKE CITY — A former West High School student was sentenced Thursday for causing a crash that killed two of his fellow students and severely injured a pregnant woman and her unborn child on February 16.

Abraham Miranda was sentenced to one year in jail, with credit for time served, 250 hours of community service, five years of probation and to pay restitution.

Police said Miranda, 18 at the time, was street racing another vehicle on 300 West in Salt Lake City when he crashed head-on into another car going 95 miles an hour. The speed limit on that street is 40 MPH. Miranda's passengers, Vidal Pacheco and Dylan Hernandez, both died.

According to the probable cause statement, Miranda told an investigating officer he was "going fast at speeds above 60 mph because he was in a hurry to get to the arcade."

"We'll carry this the rest of our lives," said Hernandez's grandfather David Bosen after court on Thursday.

The families of Hernandez and Pacheco gave emotional statements to Judge Keith Kelly during the sentencing hearing. They talked of how the two teens, who were seniors at West High, will never live out their goals and dreams. Family members talked of the pain and suffering they've endured as they grieve.

"It's all about Dylan and Vidal," said Hernandez's mother Ginger Bosen. "If you knew them, and what kind of guys they were."

She said Dylan, her only child, was "kind, loving, intelligent, socially conscious. My best friend." She asked Judge Kelly to impose a prison term of at least one year on Miranda.

The family of the woman injured in the car Miranda crashed into also spoke.

Amy Wilson talked about the 16 broken bones, collapsed lung, lacerated organs and traumatic brain injury she suffered in the crash. She was eight months pregnant at the time. Doctors delivered her daughter Grace by emergency C-section. Grace, Wilson said, was diagnosed with permanent brain damage. They won't know the extent of Grace's injuries until she's 7 years old.

Her message to Judge Kelly, and to Miranda, was different than the families of the victims. She sided with the recommended sentence of one year in jail agreed upon by the prosecution and defense.

"It was also very beautiful and satisfying to be able to let Abraham know that we’ve forgiven him and we’re moving forward, and we hope that he can as well," Wilson said, after the hearing.

Miranda addressed the court, apologizing for his "irrevocable actions."

"I'm sorry. I wish I could take everything back," he said, crying as he spoke. "I wish I could switch with them, every day I think of it."

"All I could ask now, your honor, is an opportunity for redemption, a second chance," he said.

Judge Kelly said after going over input from families of all involved, and looking at the recommendation by Adult Probation and Parole, he decided to go with the sentence that both the prosecution and defense said they felt was appropriate for Miranda.

"We feel betrayed by the sentence," David Bosen said.

He said there's many other crimes that don't involve death, where the people at fault have received longer sentences than what Miranda got.

"He receives a light sentence for two deaths and destruction of two other people," he said.

"The punishment should have been more severe for what happened," Ginger Bosen said.

But for the Wilsons, they said they believe Miranda is a really good person who made a stupid choice.

"This was just one of those… a teenage decision that was obviously very, very bad, but he's a human and has a chance and deserves a chance to make this right," Wilson said.

Miranda's attorney Greg Skordas argued that sending someone like Miranda to prison only makes the situation worse. He said Miranda has a clean record, and that nearly 100 people in including West High students and teachers wrote letters attesting to his character.

"We'll see how he does down the road and in the future," Skordas said, "And what he can do to make his life better, and to make this whole thing right."