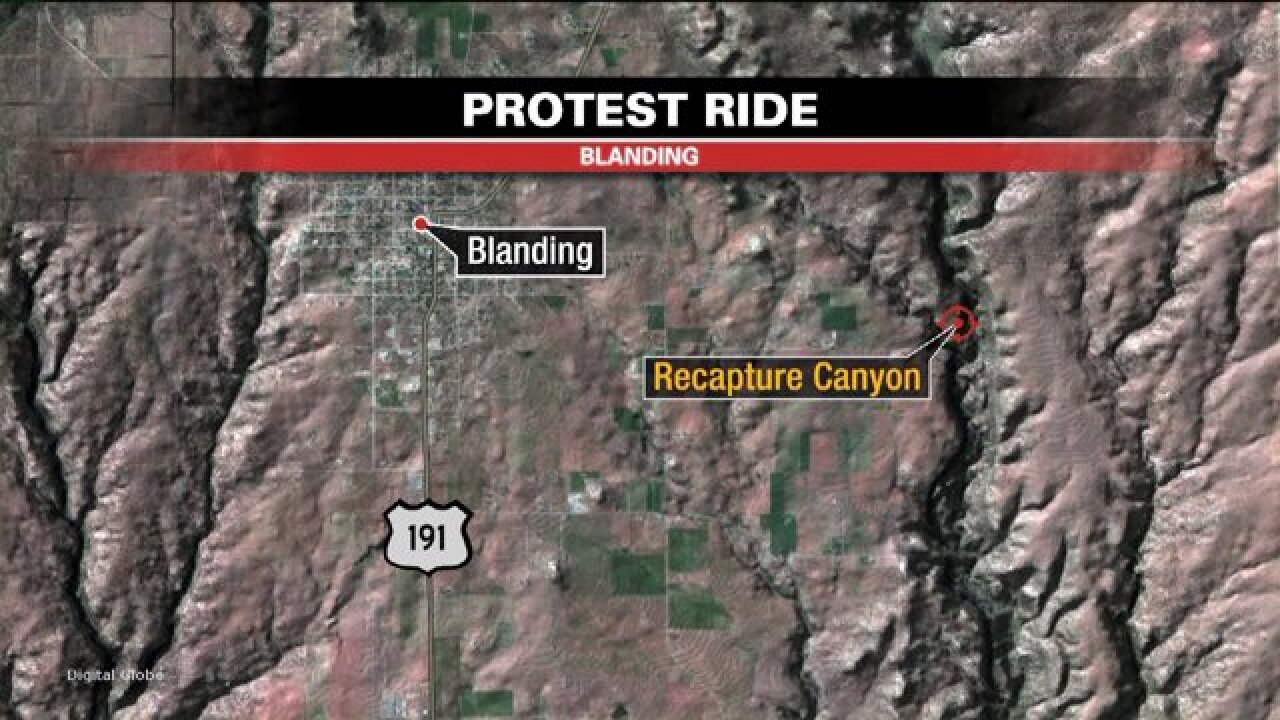 BLANDING, Utah -- It's a fight for rights over public lands; protestors drove ATVs through an area banned to riders for years Saturday morning.

Saturday's ride began at about 9 a.m. in Recapture Canyon in Southeastern Utah, and between 300 and 500 protesters were in attendance.

BLM officials were also there, but they arrived in plain clothes rather than in uniform and all interactions were peaceful.

The showdown was organized by San Juan's County Commissioner, who said the ride is a demonstration of his disgust with the federal government. The BLM had warned riders to stay out, and the governor urged Utahns to follow the law.

"Recapture was chosen because it's right next to town,” said Phill Lyman, who is the man behind Saturday's protest. "It's been close to 8 years since the country put its right way of application. It feels like it's been dragging on and on."

Western residents at odds with the federal government drove their ATV's through Recapture Canyon in an act of defiance.

"BLM has been very adamant,” Lyman said prior to the protest. “They said, ‘Don't do it, or we will cite you with criminal and civil penalties.’ I don't like that. The sheriff has been very supportive and recognizes what we're dealing with. He's from here, he's local, we have a great sheriff and he doesn't plan on giving citations tomorrow, keep the peace and look out for the people who are exercising their rights under the Constitution.”

Lyman said he wants people to stand up for what he calls their right to public lands.

He said: "Sometimes people have to stand up and say, ‘This is what we want. This is the way it should be.’”

The trail in Recapture Canyon was closed to motorized vehicles in 2007 after the construction of an illegal trail damaged archeological sites.

The Bureau of Land Management, which has been on high alert after an agency wrangler was threatened at gunpoint on Tuesday on 1-15 in Juab County, released a statement Friday, saying in part: "We regret that the illegal ATV ride planned for tomorrow appears to be going forward. Recapture Canyon is public land belonging to all Americans and contains ancient cultural sites and artifacts that are at serious risk of being destroyed or damaged."

Governor Gary Herbert also released a statement promising to work with all the parties involved but also said: "I encourage everyone to uphold the law and not do anything that could disrupt public safety."

"There's natural law, then there's political law. To me this is political," Wells said.

The fight over public lands has long existed, especially in Utah. It most recently gained national attention when Nevada rancher, Cliven Bundy, whose been in a 20-year legal dispute with the BLM and had the support of some Republicans, made remarks about whether black people would be better off as slaves. He has since lost the support of conservative politicians but the fight over public lands only seems to be intensifying.