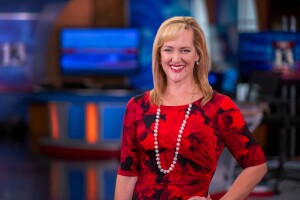 Amy Nay is excited to be joining the Fox13 news team. She anchors Good Day Utah Weekend edition. You can see her every Saturday and Sunday morning with Brek Bolton from 6-9 A.M.

Amy is a 22 year television news veteran who spent the last seven years anchoring the weekend shows at Channel 2. She hosted 2News This Morning Weekends and the 5 and 10 o’clock news shows for KUTV in Salt Lake City. She also traveled the state reporting, meeting people in their communities and helping tell their important stories.

Before that, Amy worked for nearly 14 years in New York City, with eight years as a morning news anchor for News 12. She also reported for WPIX Channel 11 and CNN. Amy also worked in radio news at WOR, WABC and 1010WINS.

Amy is originally from Utah, growing up in Gunnison in lovely Sanpete County. After spending many years away, she is grateful to be back in Utah, allowing her to raise their family surrounded by the people and places that are so important to this ‘Gunnison girl’.

Amy has been honored to receive an Emmy for her work as an Anchor/Reporter here in Salt Lake City, a Gracie award for Best Host in a Top 25 market when she hosted a daytime show in New York, multiple Telly awards and UBEE awards, among others. But her most proud accomplishment is her family. Amy and her husband have four young boys that keep them on their toes.

She loves to be able to give back and help with a number of charity events throughout the state and always considers it a great honor to be asked to host and MC various fundraisers and other special events. She also enjoys being able to speak to many different groups, often about the work/life balance that so many of us face.