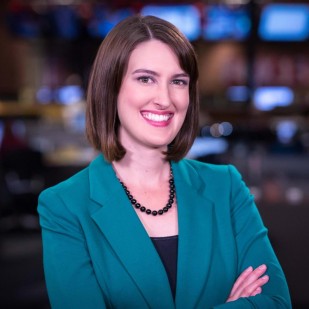 Lauren feels incredibly lucky she gets paid to do what she loves, and at such a great station! She’s a Multimedia Journalist (MMJ), which means she’s a self-contained, one-woman-band. She is just as passionate about filming and editing as she is about reporting, even if it does mean she has to lug around all the camera gear. :)

A Washington native, Lauren grew up in the Seattle/Tacoma area and graduated from the University of Washington. She’s a Husky through and through- purple is her favorite color and she even owns a Siberian Husky pup named Hachi!

Lauren most recently comes from Bozeman, Montana, where she worked as a reporter, producer and main anchor for a news station. During her time there, she won an award for spot (read: breaking) news reporting and captured some incredible moments on camera.

She loved the outdoor lifestyle that came with living in Big Sky Country, but after a handful of years, she and her husband longed to relocate to a more urban area. That’s why Lauren migrated south to SLC, where she found the perfect mixture of city and country.

Outside of work, you’ll find Lauren hiking in the mountains with her husband and Hachi, exploring the greater Salt Lake area, or cooking up a delicious gourmet meal. Lauren is a member of Toastmasters International (in which she’s won speech competitions and awards), and Big Brothers Big Sisters. She also loves hot springs, ghost towns, live theater, rock concerts, painting, road tripping, camping and skiing.

Have a story idea or want to get in touch with Lauren? Send her an email at lauren.steinbrecher@fox13now.com, or you can find her on Facebook and Twitter. She’d love to hear from you!