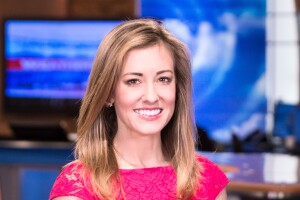 I’ve been enchanted by Utah’s mountains and terrain since I was a teenager. It’s where I first learned to ski and snowboard and a place I’ve come back to visit and vacation again and again. I’m thrilled to call it home, and excited to forecast the variety of weather in its many micro-climates.

I’ve been fascinated by the weather since I was a young girl when Hurricane Hugo blew through my home town. It devastated much of the area and made me realize how incredible, yet scary severe weather can be. I decided to learn the science behind it, and graduated from the College of Charleston with a bachelor’s degree in communication and subsequently earned a certificate in meteorology from Mississippi State University. I’m currently a member of the American Meteorological Society and earned my Seal of Approval in 2008.

I started forecasting in my home state of South Carolina at WPDE where I covered numerous tropical storms and Hurricane Ernesto. I also forecast plenty of severe t-storms including the deadly tornado outbreak that battered the South in March 2008.

From there, I headed to Albuquerque, New Mexico, and was the morning meteorologist and co-anchor of a two-hour, live show on KRQE and KASA. I was able to expand my meteorological knowledge forecasting a variety of dangerous, life-threatening weather events, including the relentless spring winds, blizzards, wicked wildfires and the flash floods that often followed.

Following Albuquerque, I moved to Portland, Oregon as the chief meteorologist for KOIN 6 (CBS) TV. I forecast blizzards, ice storms, wildfires, tornadoes, deadly windstorms and whole lot of rain. I was there for a little over 3 years before my hopefully final move to Utah!

When I’m not forecasting the weather I love being outdoors-especially in the mountains. On weekends I enjoy hiking, biking, snowboarding and camping in the mountains typically with my two dogs in tow, Ranger & Harper.