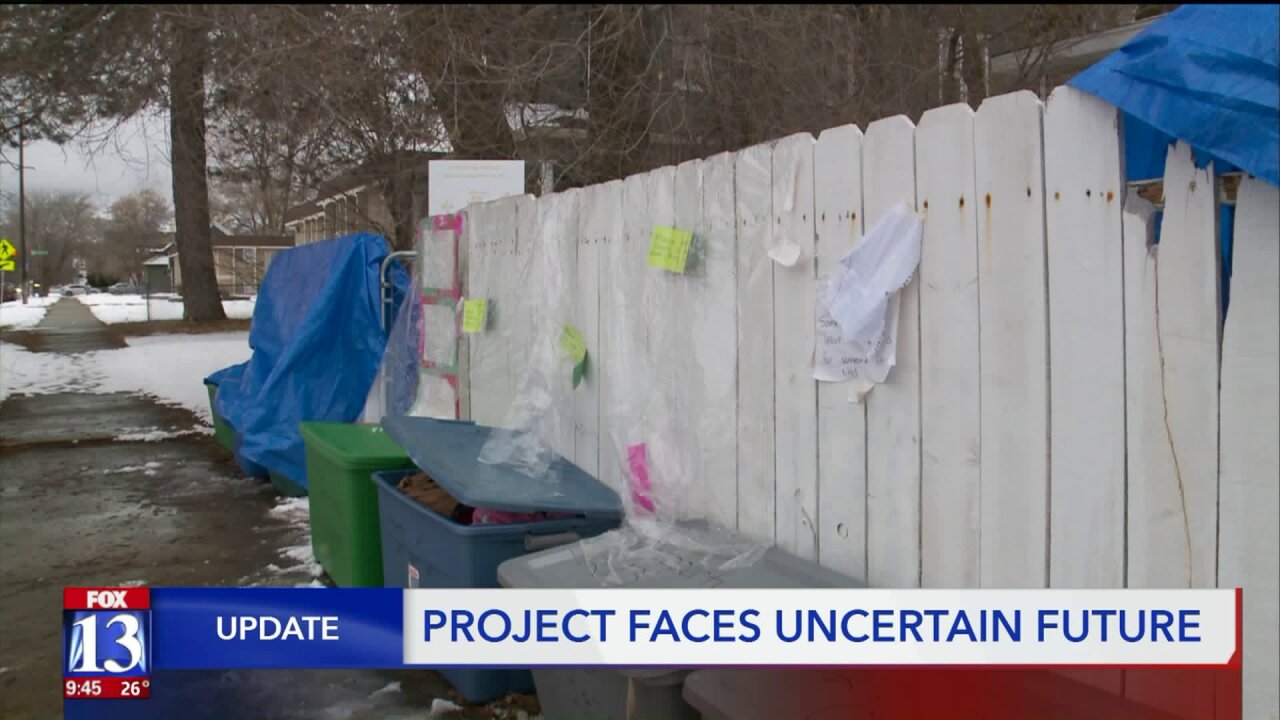 OGDEN, Utah – An Ogden resident’s grassroots giving project exploded in popularity – now, she may have to shut it down after people stole several large plastic bins that were wired to her fence to keep donations dry.

“Every morning, at six in the morning, I come out,” said Lizzy Lawrence as she stood on the sidewalk outside of her Ogden home.

A white picket fence lines Lizzy’s yard, but right now you can’t see much more than a wall of bright blue plastic tarps.

“I fix the tarps and the lids,” Lizzy said. “When I come home, I do it all over again.”

Under the tent of tarps, you’ll find seven large, heavy duty plastic buckets, each covered with a lid.

“I have to fill [the buckets] almost every time that I look in them,” said Lizzy.

Each bucket holds something different, but they all have one thing in common – they keep the items inside dry, providing goods to those who need them most.

On the other side of the gate, the buckets continue. One filled with toys, another filled with food, a bin full of shoes and capping off the end, an empty bucket – wiped out of all blanket donations.

“Then, I have bags for if people need to carry them,” Lizzy said as she pointed to a cluster of plastic grocery bags hanging from the gate.

The rules are simple; if you have it, leave it…. If you need it, take it.

“it goes to single moms, families that are struggling paycheck to paycheck, the homeless people, anybody really,” Lizzy said. “It’s people, you can tell, their gratitude for it shows, they really need it.”

The set-up may not look like much, but it’s an act of love straight from the heart.

Since Lizzy started the passion project about a month ago, it has exploded in popularity. Lizzy said she receives at least one donation every day and sees a half dozen who use the buckets as a resource.

But as the saying goes, no good deed goes unpunished.

“It’s frustrating,” Lizzy said. “I had four of those big green buckets and they disappeared.”

Just a few weeks in, the act of service is literally, ‘on the wire.’

“[The buckets] were wired to the fence and they still un-wired them and took them,” Lizzy said

“It kind of broke my spirits because I need them, that’s how we keep it dry for everybody,” she shook her head.

Lizzy said the buckets ring in at about 20-dollars each, a few family members and strangers have helped her buy new ones – a woman even had new tarps sent to her home. Still, with at least six buckets always filled, the cost of replacing them is starting to add up.

“You can’t put a cardboard box on the cold, wet cement,” Lizzy said.

“Trust me, we’ve tried!” Her 10-year-old daughter, Faith, shouted at her side.

Each bucket is still wired to the fence, but now permanent marker is strewn across the top, edge and side of each bucket, reading, ‘PROPERTY OF 213 28TH STREET, OGDEN.’

Signs on the tarps, fence and gate, accompany the markings, “Leave the tarps and buckets, they are to keep all items dry. Thank you! Tis' the season to be freezin’!”

“In the corner it says, ‘Please don’t be greedy, leave stuff for others,’ because of the [stolen] buckets],” Lizzy said.

The hope is to let everyone know; you can have it all… just not the bucket.

“I can’t keep buying buckets, I can’t expect my family to help,” Lizzy continued. “If they just keep going, I’m going to have to call it quits.”

Lizzy hopes the signs and markings will get the message across before she must close the lid on the project for good.

“There’s no way to keep it dry if I don’t have these buckets,” Lizzy said. “I can’t do it if people are just going to take everything.”

Lizzy said she wants to keep the project going if she can – however, the buckets aren’t the only issue, people are taking the donations faster than they are receiving them.

“No blankets, no winter jackets, no hats, no gloves,” Lizzy listed. “Buckets for the kid’s clothes will stay full for a while, but for the warmer adult clothes, [those] will be gone and I only have one bucket left.”

If you want to donate, look for the house directly across the street from the Marshall White Community Center in Ogden.