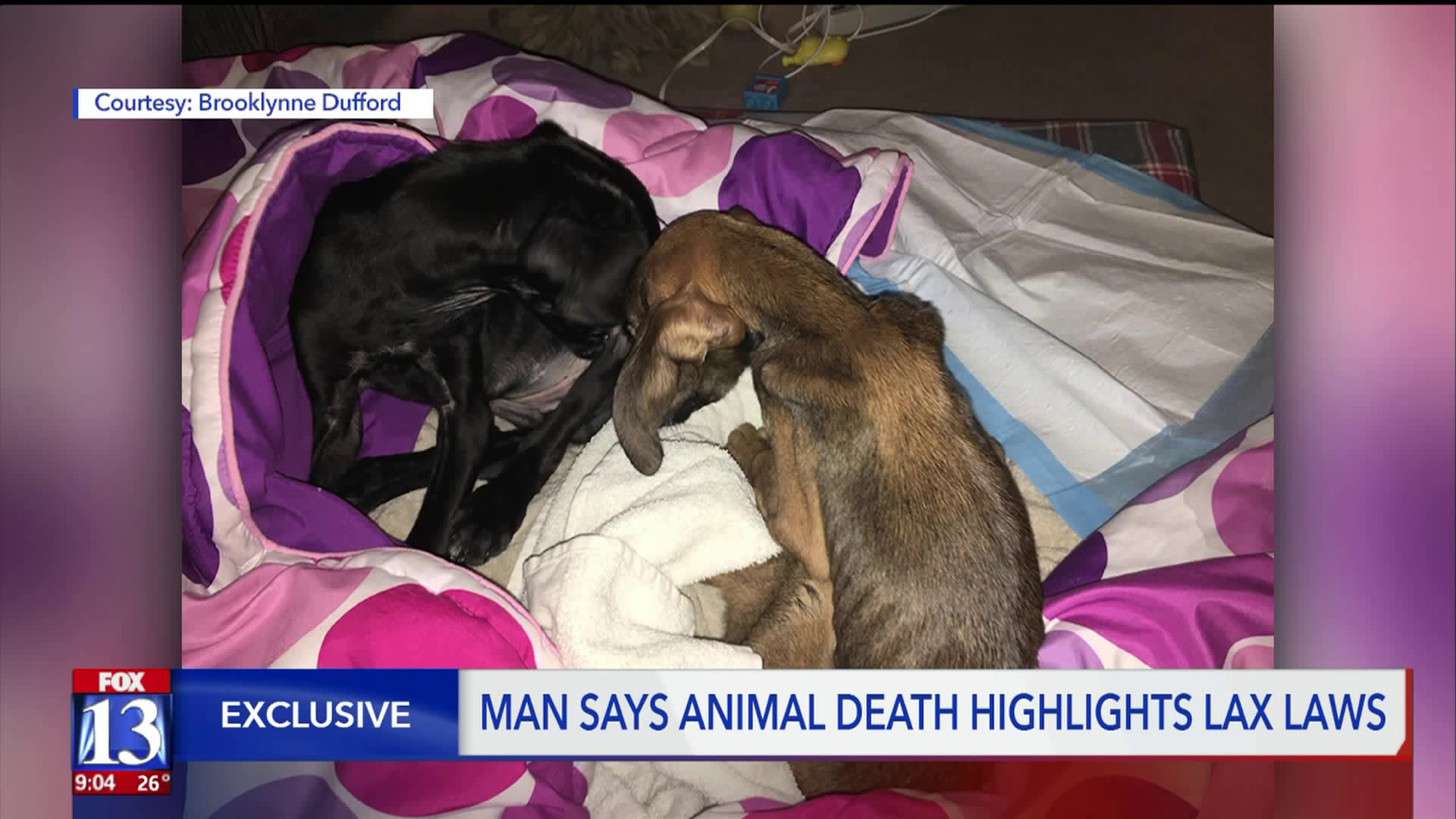 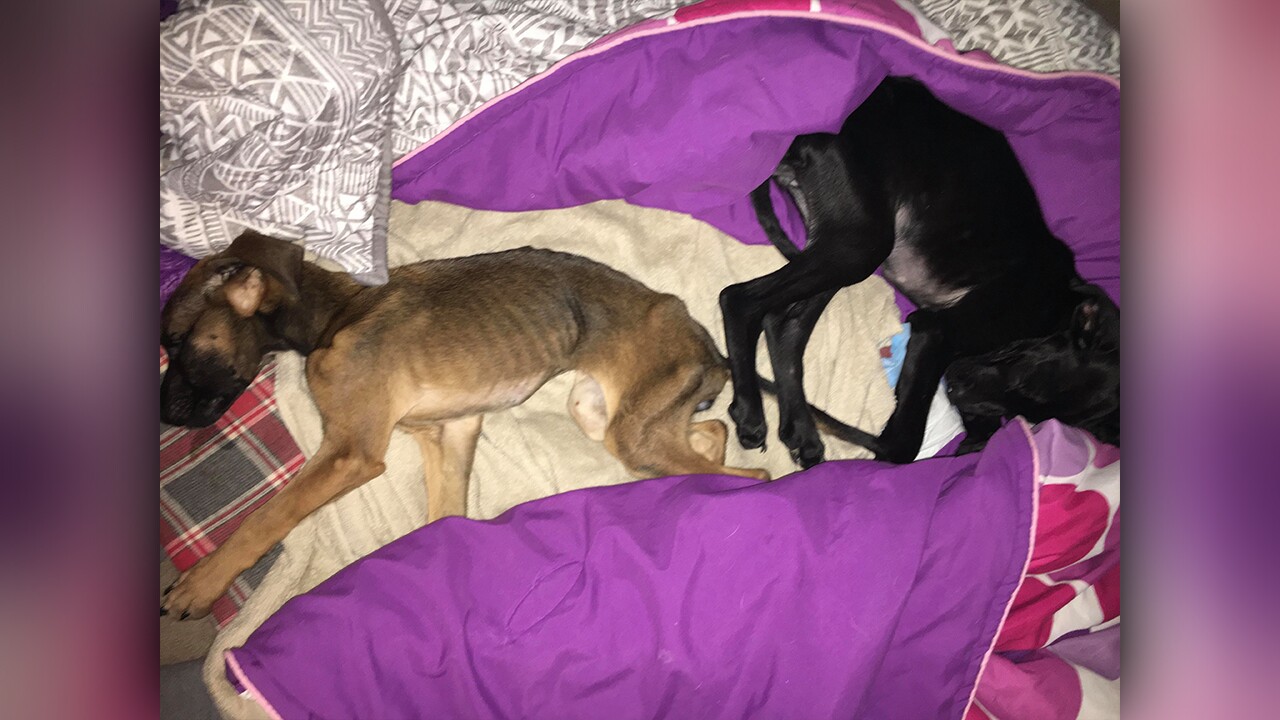 Jayden Dufford tells FOX 13 that he returned back to his house in Rock Springs a few days before Christmas with a call to local police in case things between his girlfriend got dicey. His family accompanied him to the house where his clothes were already packed in bags.

"I did not realize how bad it was going to be when I walked in," he said.

He entered the house with a police officer and his sister after talking to his girlfriend.

"My brother asks her, 'Where are the dogs?' and she says, 'In the bathroom,' and I'm like, 'What? Why are they in the bathroom?'" said Brooklynne Dufford, who had driven from Fort Collins, Colorado to help Jayden move out.

Brooklynne entered the bathroom where she located the two dogs.

"Maxy was on the ground by the door, and he was jumping all over me," she described. "I just started crying, and I was trying to look around for the other one."

In the bathtub, she saw the other dog, Angel.

"I screamed bloody murder, 'I think one of them is dead!'" she told FOX 13 in a video interview from Wyoming.

"[Angel] was lifeless, hanging on to dear life, was just skin and bone not moving," Jayden said. "We thought she was dead."

Brooklynne recalled grabbing Maxy and taking the dog to the car, while Jayden stayed in the bathroom thinking his dog was deceased. After Jayden's step-mother came to console him, she noticed Angel had moved slightly.

"I carried my best friend out to the car to give her the love and the care for the night that she lived," he said.

The family was concerned with the potential high cost of an emergency veterinarian visit, so they tried to use some food and formula options suggested by vets they had called. The next morning, they decided to take Angel to the vet — but she passed away in Brooklynne's arms on their way.

"I watched her suffer of internal bleeding because of how bad she was starved," Brooklynne said.

According to Rock Springs Police Department, Lauryn Burge, who had been watching the two dogs while Jayden was away at basic training, has been cited for cruelty to animals, which carries a fine up to $750.00 and/or 6 months in jail. Per Rock Springs Municipal Court, Burge pleaded guilty and will be sentenced on January 21.

FOX 13 reached out to Lauryn Burge for a comment on the accusation and charge of animal cruelty. She responded:

Jayden Dufford got the puppies for his birthday a week before he left for basic training. We talked about re-homing them before he had left because of the fact our combined incomes made it hard to survive with us and my son. The dogs were skinny when we got them and Jayden said he would train them before he left. Shortly after he left I lost my job at Wendy’s and was looking for work. I could barely pay our bills and was late on rent because rent was due the first and his checks did not come in till around the tenth. I used his two checks a month on rent and our phone bill because that was all we could afford. I got assistance for food and my sons formula. I got a new job and still barely made enough to afford all our bills. I asked for someone to take the puppies since I could not afford them and our bills. I fed them every day when I fed my two cats Bella and Sam. Around October my cat Sam escaped and I let everyone know that he was missing. He had gotten out because the door to our apartment did not close completely and our landlord knew about it. I used any money we made for my son and to keep the apartment we were living in. I even moved in new roommates to help and they were looking for jobs while I was working. During November I called a vet several times for advice because the dogs would not gain any weight and were barely keeping wet food down. The vet told me to try different foods and to keep them updated. We tried six different dog food brands and they still were not gaining weight. We set up an appointment for them for when I got paid.

The story spread on social media and brought State of Wyoming animal cruelty laws into question.

"In a lot of states, that sort of neglect or abuse resulting in death would be a felony. In Wyoming, it's less clear," said David Rosengard, a senior staff attorney with the Animal Legal Defense Fund. "Felonies are hard to reach for animal cruelty in Wyoming and much harder in Wyoming than many other states."

In 2019, the Wyoming House of Representatives passed language on a bill that would have imposed harsher penalties regarding animal cruelty cases. However, the language was changed before it reached the Senate and was modified before being adopted.

"Animals are living, breathing creatures. They're not objects, they're not like tables or chairs," Rosengard said. "We want to protect them and make sure they don't suffer and experience cruelty."

If you'd like to help cover costs of veterinarian bills for Maxy's recovery, you can donate through a GoFundMe campaign here.