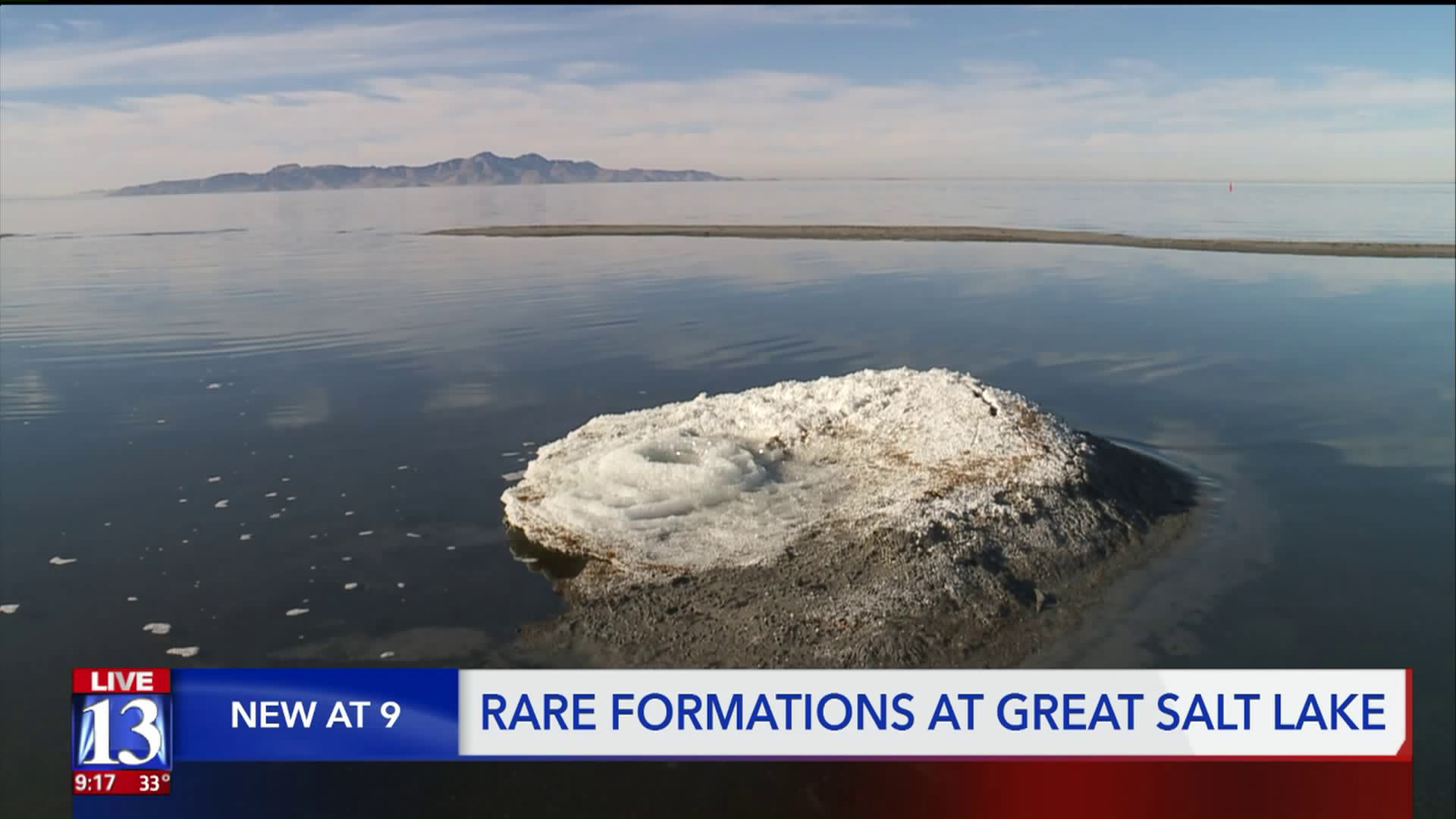 Geologists have identified rare geological formations, typically found on the polar ice cap and on Mars, for the first time along the North shore of the Great Salt Lake. 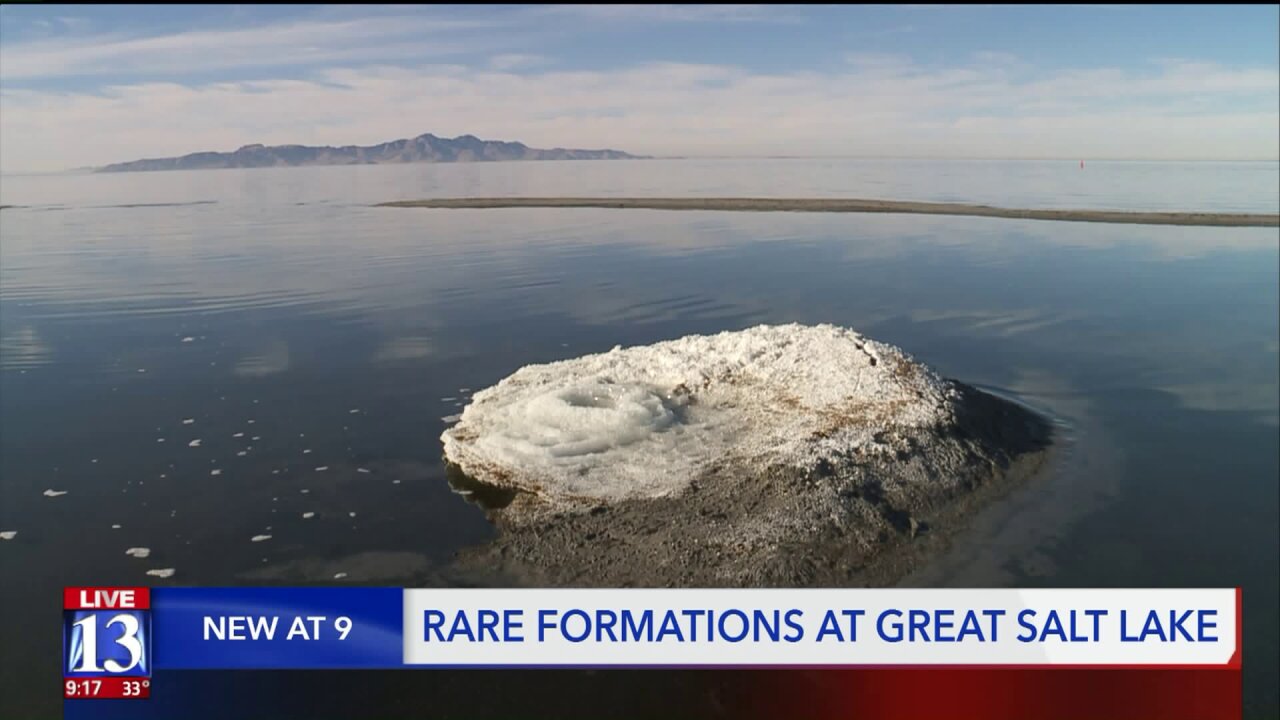 SALT LAKE CITY – Geologists have identified rare geological formations, typically found on the polar ice cap and on Mars, for the first time along the North shore of the Great Salt Lake.

With soft ripples on the surface, a soft breeze and icy cold water breaking along the South shoreline – it’s a perfectly peaceful and scenic winter day at the Great Salt Lake.

“It’s [an] otherworldly beauty that can let people have a sense of peace,” said Allison Thompson, a park ranger at the Great Salt Lake State Park.

It’s a sight many have stopped to marvel at, but this year, there’s new something in the water.

“It’s something new that we haven’t seen before,” said Geologist Mark Milligan with Utah Geological Survey.

At a glance, you make think the four white mounds in the water along the South shoreline are glaciers, a type of crystal, or maybe just salt… But from up above, they look like something out of this world.

In fact, unless you’ve been to the polar ice cap or Mars, you’ve likely never seen anything like them.

Spanning a few feet wide and high, the mounds look like a maze of white, delicate crystals.

“They’re rare, we may never see them again,” Milligan continued.

At the center of each formation is a natural spring carrying a mineral called Mirabilite.

“There’s water coming out from the spring here,” Milligan said as he pointed to a golf ball-sized hole at the center of the largest mound. “As [the water] flows down, it forms these terraces, as the mineral Mirabilite precipitates those terraces just build out,” he said as he waved his hand in front of the perfectly scalloped edge.

The mounds are somewhat of a geological anomaly.

“You need very specific conditions of the water chemistry, the temperature, and the lake level to get them,” Milligan explained.

Geologists knew these formations had been found in the Arctic region and on Mars, but never in Utah.

“We started noticing them in mid-October, at first they were very, very small, you could barely distinguish them from the sand,” Thompson said. “We’re talking like an inch, very, very small, maybe like that,” she said as she showed a small space between her index finger and thumb.

Thompson noticed they were growing so she started to document any changes.

“By mid-November, I was like, ‘They’re over a foot tall, they’re changing really cool, this is not just some random salt crystal,’” Thompson said.

It was at that point Thompson called the Utah Geological Survey. She told them the formation was clear, hard and when taken outside of its environment, it turns to a fine white powder.

“It’s kind of exciting, like in our office it was the chatter of the last few days, ‘What are these things? Why are they here?’” Milligan smiled.

Geologists began to investigate, testing the water chemistry and looking at the minerals to try and figure out what they were. They soon realized it was Mirabilite.

“It’s just here that seems to have the right elevation, the right conditions of saltwater versus freshwater, and the spring coming up through the material… it’s the perfect storm to create these right here, just for us!” Thompson grinned.

Geologists said even though the conditions seem to be perfect, no one knows why they are just now showing up.

“It’s possible they just weren’t noticed before, we don’t know… There’s evidence on old aerial imagery of these springs being here, but not of the mounds with the springs,” Milligan said.

“This is another example of something that is unique to Great Salt Lake, it’s a treasure!” he exclaimed.

These are a winter-only marvel, as soon as the water level or temperature rises, the mounds will disintegrate. Geologists believe, best case scenario, they could last until February or March.

Park Rangers will provide tours next weekend, January 11-12, from 10 a.m. to 4 p.m. every half hour. They ask that people do not touch the mounds to help preserve them while research continues.

Tours will meet at the Visitor's Center, they recommend bringing tall, waterproof boots.