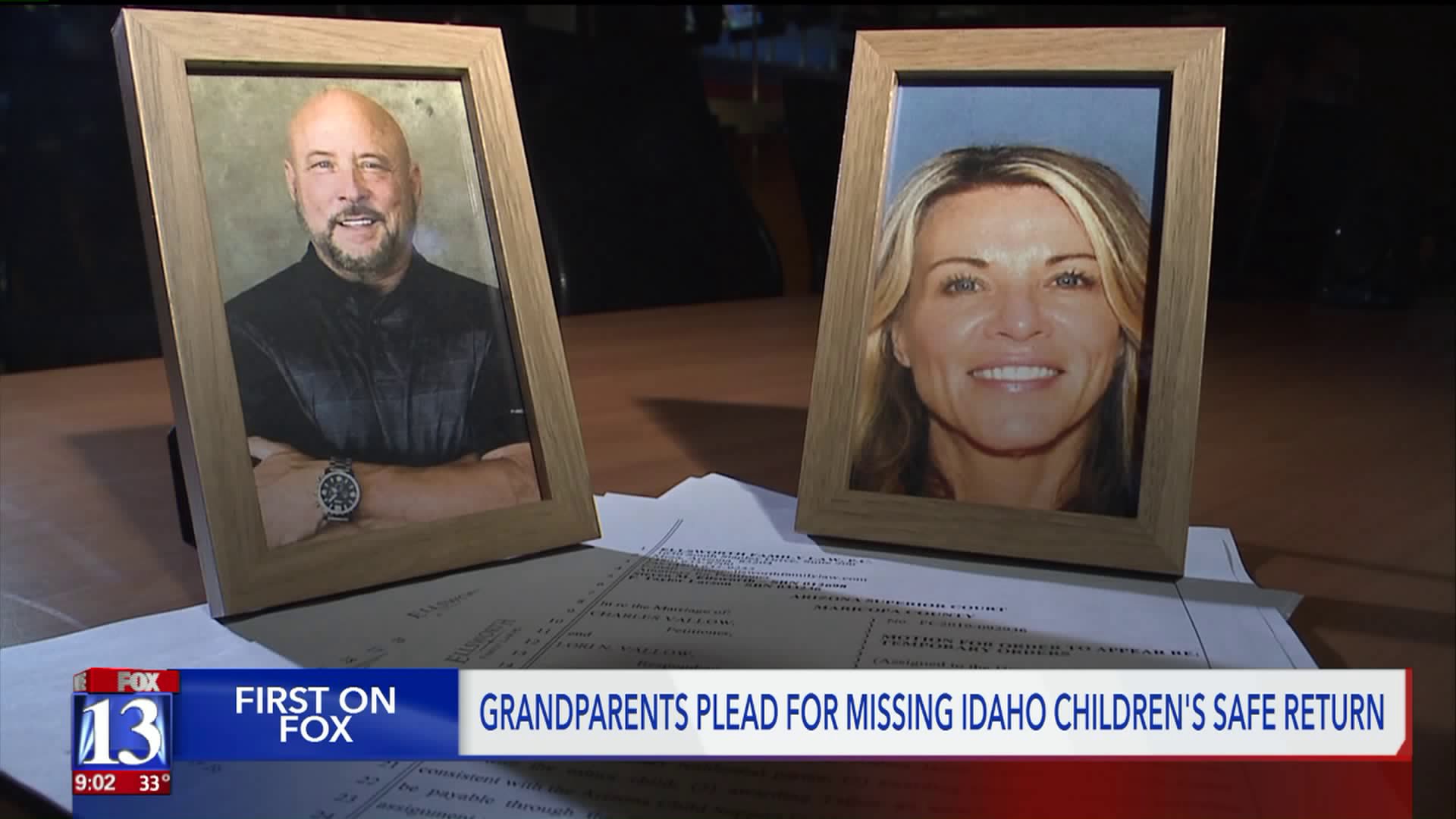 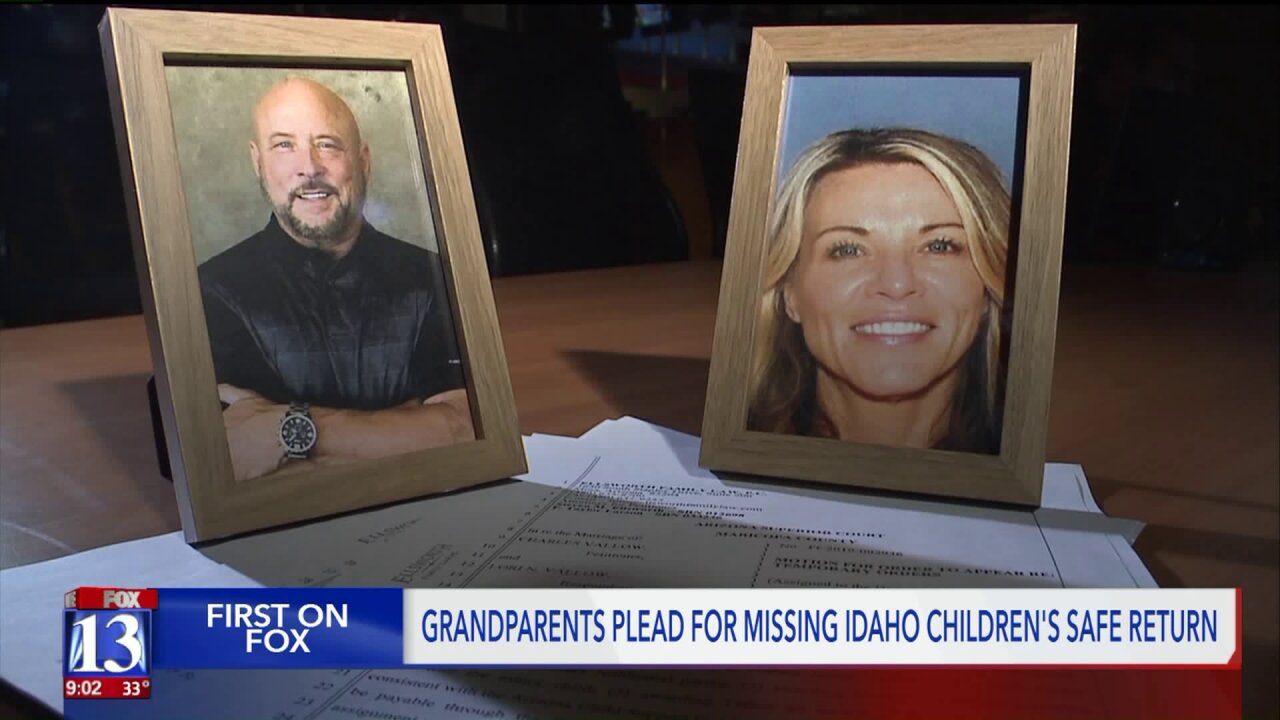 SALT LAKE CITY — Family members from Louisiana have flown in to meet with the Rexburg Police Department and FBI to discuss the disappearance of Joshua “JJ” Vallow (7) and Tylee Ryan (17).

Kay Woodcock and her husband Larry Woodcock are the biological grandparents of JJ, an autistic little boy who has been missing since September along with his sister.

Police said the children’s mother — Lori Vallow — and her new husband — Chad Daybell — did not report the children missing, instead choosing to flee from Idaho and refusing to cooperate with the investigation.

“I don’t have any expectations. I’ve never done this before. I have no idea. I just feel like I need to be in Idaho,” Kay Woodcock said. “I’d love (Chad and Lori) to be arrested. Have her in one room and Chad in the other? Absolutely.”

TIMELINE: Attorneys I've spoken to say, based on this timeline and the facts investigators have been able to gather so far, police have enough evidence to arrest Chad Daybell and Lori Vallow today for obstruction... but they might be strategically choosing not to do so.@fox13 pic.twitter.com/wzcnP15bYE

“We’ve cried until there’s not much left to cry,” Larry Woodcock said. “The hole that Lori and Chad are digging just keeps getting deeper… If I could just have (JJ) back one time, please God give it to me. One time. If he’s not with us anymore, just tell me that.”

On July 11, Lori Vallow’s brother Alex Cox shot and killed Charles Vallow in Chandler, Arizona. Cox told police at the time the shooting was in self-defense. The case is still under investigation.

Alex Cox later died on December 12 in Gilbert, Arizona. Investigators are not releasing any information about the circumstances surrounding his death, due to an ongoing investigation.

According to court documents obtained by KSAZ-TV, Charles Vallow wanted to divorce Lori Vallow because of her newfound religious beliefs. Months before he died, Charles Vallow had serious concerns about the kids’ wellbeing.

The following is an excerpt from court documents filed by Charles Vallow’s attorney on February 15, 2019.

“Mother [Lori Vallow] has recently become infatuated at times obsessive about near death experiences and spiritual visions. Mother has told Father [Charles Vallow] that she is sealed [eternally married] to the ancient Book of Mormon prophet Moroni and that she has lived numerous lives on numerous planets prior to this current life. Mother also believes that she was married to James the Just in a past life and also lived as Mary French in the 1800s who was Joseph Smith Junior’s natural grandmother. Mother also informed Father that she is a translated being who cannot taste death sent by God to lead the 144,000 into the Millennium. Mother believes that she is receiving spiritual revelations and visions to help her gather and prepare those chosen to live in the New Jerusalem after the Great War as prophesied in the book of Revelations.”

“On January 29, 2019, during a phone conversation between the parties and after their physical separation, Mother informed Father that she was a God assigned to carry out the work of the 144,000 at Christ’s second coming in July 2020 and that if Father got in her way of her mission she would murder him.”

“The next day Father was on a business trip in Houston and during another phone conversation she kept referring to Father as ‘Nick Schneider’ instead of Father’s name. Father asked who Nick Schneider was and Mother told him that Nick was Father’s real name because Nick had killed Father and taken his identity. Mother proceeded to warn Father that she would kill him upon his return home and had an angel there to help her dispose of the body. She also mentioned that she could not trust Father and that she would not only kill him but would destroy him financially. Since that conversation Mother’s communications with Father have been rare and intermittent.”

Kay Woodcock told FOX 13 she and her husband would routinely talk to her brother about whether it’s possible to somehow overcome his wife’s new beliefs and save the marriage.

“Charles told me he had recordings of her. He said, 'Nobody will believe me,' and he recorded her one night,” Kay Woodcock said. “Even though it’s deleted, nothing is ever deleted electronically or whatever. However that is… For her to say she’s a translated being and she is reincarnated? That is scary!”

“Some nights he’d call me just crying like a baby, and it hurt my soul,” Larry Woodcock said.

Kay Woodcock said she always loved Lori Vallow “as a sister,” but later suspected Lori Vallow and Chad Daybell were having an affair based on emails exchanged between the two.

Kay Woodcock said the final in-person conversation she had with Lori Vallow took place in 2018, in a car on the way to the airport.

At the time, Lori Vallow revealed her marriage to Charles Vallow was her fourth marriage.

“She’s a black widow,” Kay Woodcock said. “(Husband) three and (husband) four are dead. Five? He’s next. How he’s gonna go? I don’t know. But I wouldn’t sleep with my eyes closed.”

Kay Woodcock tells me her last in-person conversation with Lori Vallow was in 2018.

She and her husband now believe Vallow refuses to tell police where her missing 7yo son is… because JJ was a witness to the killing of his own father last July.

This is a @fox13 web exclusive pic.twitter.com/hTOk5saABP

Chad Daybell’s wife, Tammy Daybell, died within two weeks prior to his marriage with Lori Vallow. They had five children together.

Medical examiners initially believed Tammy Daybell died from “natural causes” at the age of 49, but her body has since been exhumed in Springville, Utah for further investigation into suspicious circumstances.

The Rexburg Police Department has confirmed Tammy Daybell called 911 in the days prior to her death to report a man pointing a “paintball” gun at her.

“That wasn’t a paintball gun,” Kay Woodcock speculates. “The fact that he pulled the trigger twice and it didn’t do anything is because it misfired. Otherwise she’d probably have been dead that day.”

“What makes me believe that is, first, (the gunman) was totally masked,” Larry Woodcock said. “He was in all black.”

Kay and Larry Woodcock have never met Chad Daybell or his late wife Tammy Daybell. Still, they have learned about a call she placed in the days leading up to her mysterious death on 10/19.

This @fox13 web exclusive shows what they believe happened. pic.twitter.com/ayqoYDmZdw

Kay Woodcock said she believes the newlywed couple may have taken JJ and Tylee because they were witnesses to the shooting of Charles Vallow.

Although JJ is autistic, family members say he has an incredible memory and reads at a very advanced level for his age.

“He was reading at three. He was doing math at three,” Larry Woodcock said. “I’d love to take him to Vegas with me!”