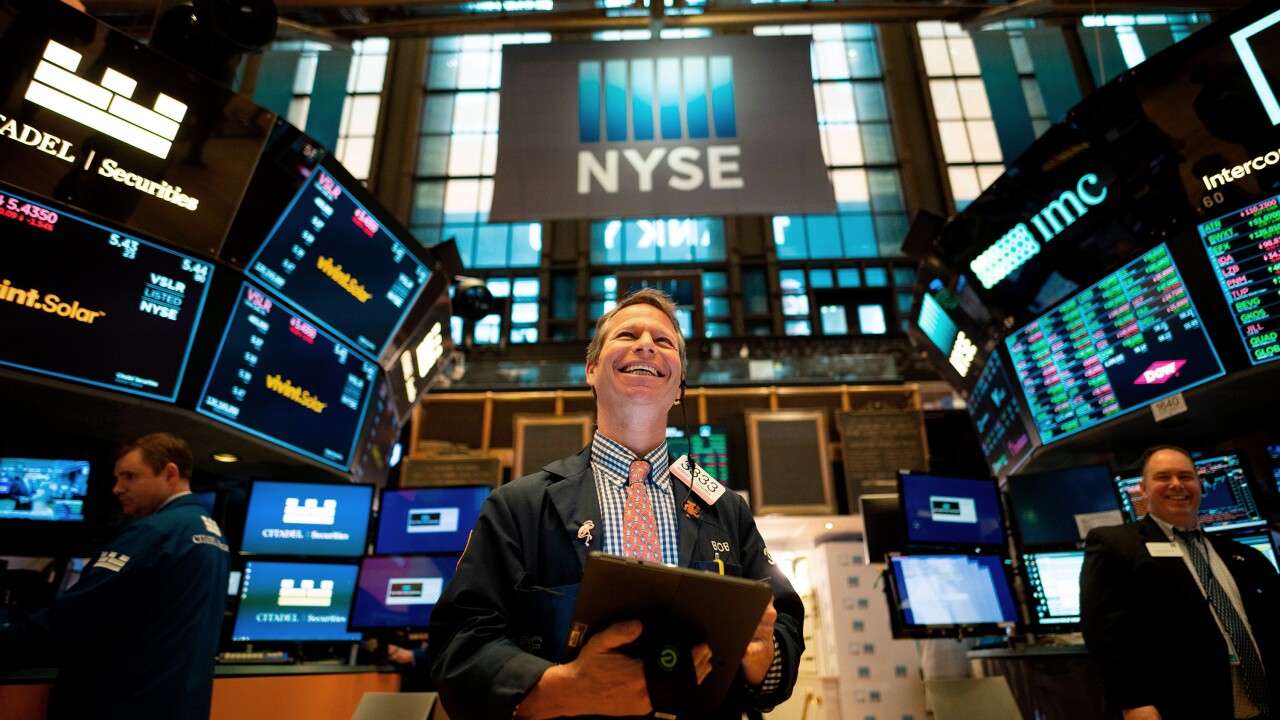 A trader works ahead of the closing bell on the floor of the New York Stock Exchange in this April 12, 2019, photo in New York City. US stocks had a fantastic year in 2019, with all three major indexes climbing more than 20%. Source: Johannes Eisele/AFP/Getty Images

(CNN) — US stocks had a fantastic year in 2019, with all three major indexes climbing more than 20%. But that performance came at the price of volatility and uncertainty.

Last year ended on a sour note, with the worst December since the Great Recession leading to the first annual stock market losses in three years. This year was a rebound — and then some — but it wasn’t easy. Trade and the Fed, the two big themes of 2019, pushed and pulled on equities. The Fed won out, and stocks soared. Investors got quite a bit of whiplash along the way.

President Donald Trump’s approach to trade policy, including tariffs and threats of escalation, was a main driver of investor and business sentiment. The trade war with China took center stage as the world’s two largest economies imposed tariffs on each others’ imports, and what appeared to be promising negotiations to end the impasse were followed by increasing tensions.

Stocks ebbed and flowed in line with the news. This brought on some of the biggest losses and rebounds of the year, as investors factored the economic costs of the trade war into their forecasts and got excited by hopes of a deal to end the uncertainty.

August was particularly erratic and tweets from the White House didn’t help matters. On August 23, for example, stocks witness their biggest one-day swing of the year amid retaliatory tariffs from China a Trump tweeting “we don’t need China and, frankly, would be far better off without them.”

Other asset classes also had remarkable a year.

The 10-year Treasury bond yield, for example, declined by more than 80 basis points. Bond yields and prices move in opposition to each other.

Throughout the summer, investors fretted as shorter-dated bonds suddenly yielded more than longer-dated ones. This so-called yield curve inversion — a historic recession indicator — added to market worries about the economic outlook.

All the while, stocks and bonds sent conflicting signals, with equities hitting record highs and bond yields falling. This reflected just how much the uncertainty surrounding the trade war was weighing on the market.

After raising rates in 2018, citing the US economy’s recovery from the Great Recession, the Federal Reserve changed its tune in 2019.

By the summer, the Federal Reserve had grown so concerned about the economic outlook it began to cut interest rates to stimulate growth, deviating from its own forecasts for policy this year.

Lower interest rates are good for businesses and therefore good for the stock market. The Fed’s easing was a positive backdrop for equities for much of the year and acted at times as a counterbalance to concerns about the trade war and slowing global growth.

By the fall, the Fed had cut interest rates three times, Beijing and Washington were back at the negotiating table and on track to agree a preliminary deal, and recession fears had abated.

“Just to be sure, the Federal Reserve bought insurance policies in July-October 2019 by lowering interest rates three times. The practical effect of this ease isn’t as important as the signal that the Fed stands ready to provide economic and market support if needed,” said Brown Brothers Harriman Chief Investment Strategist Scott Clemons.

The Nasdaq Composite rallied the most of the three major stock indexes, on track for a 36% gain this year, which would also be its best performance since 2013. The tech-heavy index recorded its longest winning streak since July 2009 this week and climbed above 9,000 points for the first time.

While the US manufacturing sector was hit hard by the trade uncertainty, America’s consumers — the backbone of the economy — remained strong.

“The playbook for 2020 will be for stocks to rise higher as markets firmly believe the Fed will be on hold, credit markets are healthy, the consumer is strong and some of the key headwinds in 2019 are becoming tailwinds,” said Edward Moya, senior market analyst at Oanda.

That said, Washington and Beijing still haven’t signed a full trade deal, and the White House renewed its threats of steel and aluminum tariffs on Brazil and Argentina at the start of December. Levies on European auto imports also remain a possibility, so it’s safe to say the trade chapter isn’t closed yet.