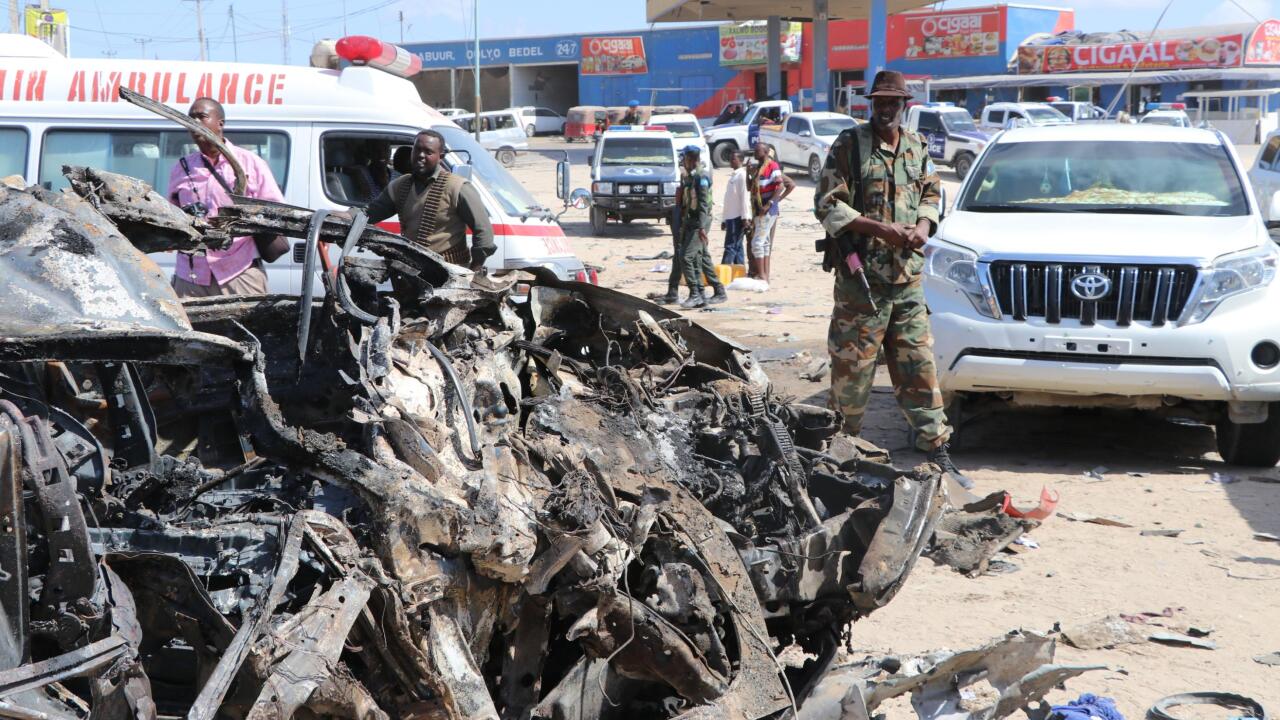 A soldier is seen next to the wreckage of car that was damaged during the suicide attack in Mogadishu on Saturday. Source: Abdirazak Hussein Farah/AFP/Getty Image

(CNN) — At least 79 people are dead and 149 more injured after a massive car bomb exploded at a busy intersection on the outskirts of Somalia’s capital, Mogadishu, on Saturday, according to a government official.

Government spokesman Ismael Mukhtar also earlier told CNN that the attacker drove his vehicle into the “Ex-control Afgoye” checkpoint, a well-known junction that links the south of Somalia to the capital.

Mukhtar added that university students were among the dead.

The attack happened during rush hour in the Somali capital at about 8 a.m. local time, and civilians and soldiers are among the dead, police said.

Police conduct security searches at the checkpoint, but there is also a taxation office located nearby and the area is heavily populated with civilians and security forces.

Police have warned that the death toll could rise as many of the wounded have been rushed to hospitals.

Images from the scene showed multiple wrecked vehicles with shards of twisted metal nearby as well as a minibus marked with blood.

A national-level response committee was established Saturday to help the injured and offer support to those who lost family members in the attack, Somalia’s Prime Minister Hassan Ali Khaire said in an address to the nation hours after the attack.

Khaire offered his “heartfelt and deep condolences to the families and relatives of the victims” and warned that “this country is in a state of war.”

“I want to tell my fellow citizens wherever they are in the world, that the morale of the Somalian people won’t be undermined by the terrorists’ attacks,” Khaire said in an address to the nation Saturday. “The enemy would be defeated and victory will ultimately be with the Somali people,” he promised.

The country’s president, Mohamed Abdullahi Farmajo, described the attack as a “heinous act” in a video posted on his Twitter account.

“This dark day has robbed our nation of dozens of innocent lives, the perpetrators of this heinous act of terror will never dim the spirits of the people of Somalia. Let’s join hands in countering this evil in our midst. Let’s move fast and help out the survivors,” the President said.

On Sunday, 15 people — including an eight-month-old baby — were airlifted to Turkey in critical condition, according to Somalia’s security minister.

A Turkish military cargo aircraft transported the injured to receive further medical treatment, Somalia’s Minister of Information Mohamed Abdi Hayir Mareye added. In total, 45 were critically injured and Mareye said the remaining of those 45 will be taken to Qatar and neighboring countries for treatment.

“May Allah’s mercy be upon our 2 citizens and innocent Somali brothers&sisters who lost their lives in the heinous terrorist attack,” Çavuşoğlu wrote on his Twitter account. He added Turkey would continue to stand with Somalia in the fight against terror.

Saturday’s attack came two weeks after at least five people were killed in a seven-hour battle at a hotel popular with lawmakers and security officials in the Somali capital.

In February, the group Al-Shabaab claimed responsibility for a car bombing at a crowded shopping mall that left at least 10 dead. It was also behind three car bombings last November that killed at least 52 people with about 100 more injured.