Moroccan journalist faces a year in prison over tweet about judge 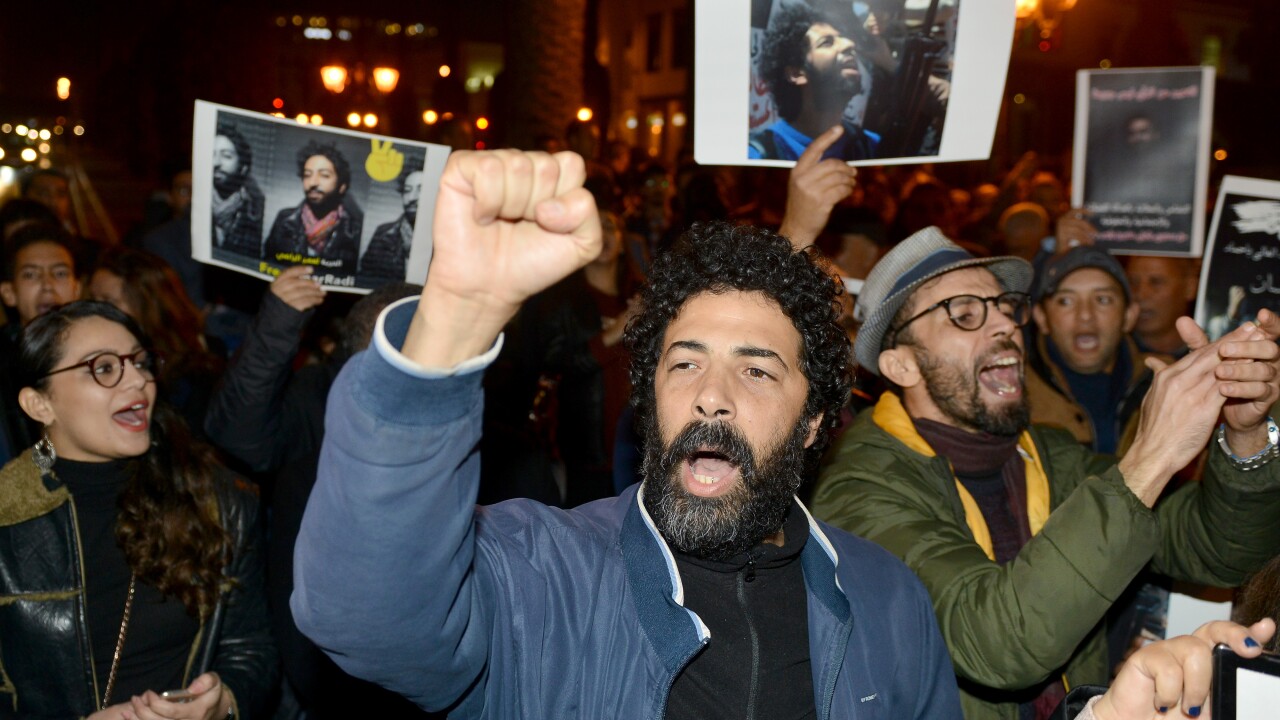 Demonstrators offer Radi support at a demonstration on Saturday in the city of Rabat. Source: STR/AFP/Getty Images

(CNN) — Moroccan journalist and activist Omar Radi will face trial in Morocco in January for allegedly insulting a judge in a tweet he posted nine months ago, NGO Human Rights Watch said in a statement.

Radi, 33, an award-winning investigative journalist who has written about corruption, and collaborated with various international media, is due to be tried on January 2. He faces up to a year in prison if convicted, the human rights group said Saturday.

“Moroccan authorities should unconditionally release and drop charges against a journalist jailed for a nine-months-old tweet criticizing a judge,” HRW said.

Moroccans rallied in support of Radi outside of the country’s parliament in the capital Rabat on Friday and Saturday demanding his release.

“I am at this demonstration today in Rabat to condemn and denounce the illegal arrest, which is political revenge against investigative journalist Omar Radi,” Maati Monjib said.

“Omar Radi is arrested because he exposed, he spoke, he wrote, he documented the corruption of the ruling elite,” Monjib added.

Back in April, Radi posted a tweet critical of a judge who presided over an appeals court which upheld the verdict against leaders of a protests movement in the Rif Region, who were sentenced in June 2018 for up to 20 years, HRW said in its statement.

“Let us all remember Appeals Judge Lahcen Tolfi, the enforcer against our brothers. In many regimes, small-time henchmen like him come back begging, later, claiming they were only ‘carrying out orders.’ No forgetting or forgiveness with such undignified officials!,” Radi tweeted just minutes after the court’s decision in April.

About 10 days after he sent the critical tweet, police in Casablanca summoned Radi and interrogated him for hours over a series of tweets he posted criticizing a magazine feature profiling Judge Tolfi he found too favorable, HRW said.

The police summoned Radi again on Wednesday, according to a post he tweeted on that day. When he reported to the police the next morning, they transferred him to a court in Casablanca where they began questioning him in the company of four lawyers, HRW said in the statement.

The 30-minute session focused on the single tweet from April 6, Omar Bendjelloun, of the lawyers, told Human Rights Watch.

Shortly after, Radi was charged with “insulting a magistrate” and immediately referred to trial which was set to start hours later, according to HRW.

His defense team was able to secure a postponement until early January, but Radi’s request for pre-trial release was rejected.

“Radi’s unjustified detention and trial comes amidst an increasingly suffocating atmosphere for Moroccan journalists, dissidents, and artists who speak out on social media,” Sarah Leah Whitson, Middle East and North Africa director at Human Rights Watch. said. “If you express your dissatisfaction of the government on YouTube, Facebook or Twitter, you risk jail in Morocco. Not great for a country that still postures as a ‘liberal exception’ in the Arab world.”

CNN has reached out by email to Morocco’s government including the Interior Ministry but has not yet heard back, nor has there been extensive reporting of this case by the Maghreb Arab Press, the official news agency.