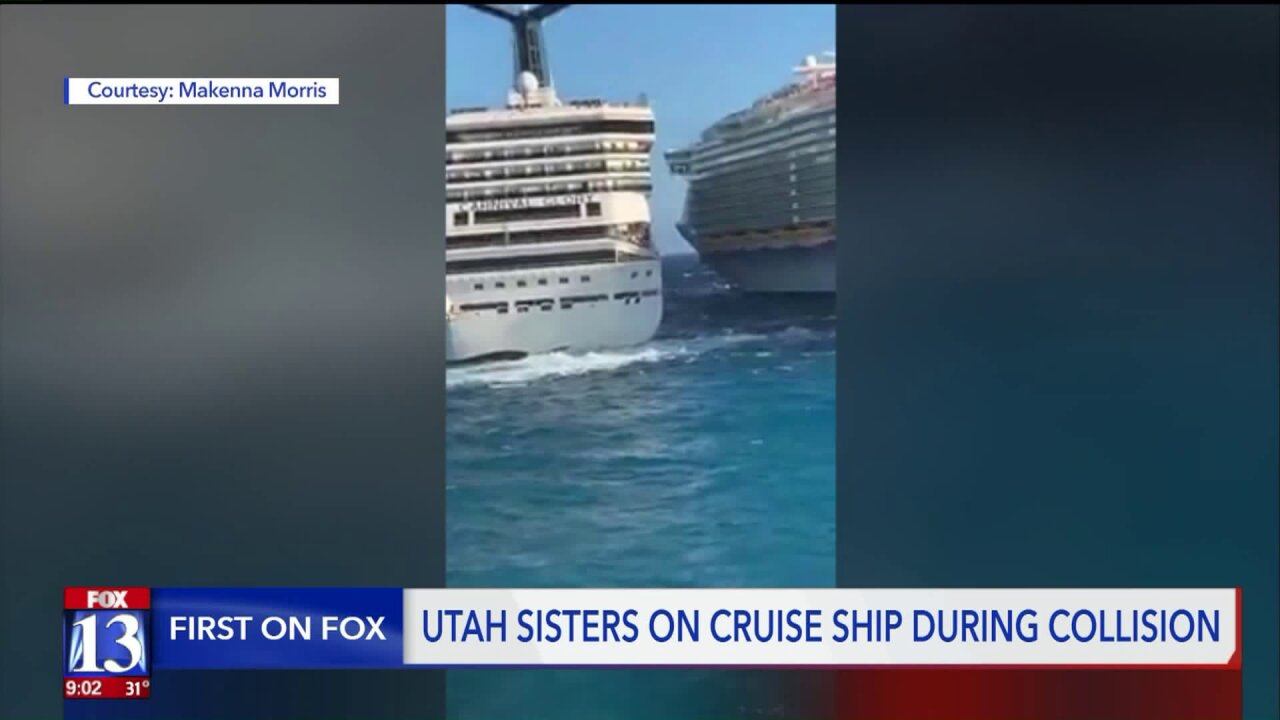 SALT LAKE CITY — Two Utah sisters are sharing videos and explaining the moments their Carnival cruise ship was slammed into by another Carnival ship in Mexico.

The crash injured six people and left one of the ships with major damage.

The Morris sisters from Centerville were getting ready to relax in Cozumel for the day, the lasts port on their Caribbean cruise.

“We’ve just had a great time,” Maddie said, of their cruise.

Maddie and Makenna shared pictures from the various places they stopped over the week, as they made holiday memories with their family away from snowy Utah.

Though, the weather hasn’t been perfectly sunny.

“We had a really stormy cruise,” Maddie said. “We’ve kind of outrun some tropical storms, and it’s just been really wavy and really rocky.”

They said it was windy after they docked in Cozumel Friday morning. As Makenna looked out at the turquoise water from a balcony, she noticed another the Carnival Glory ship swinging toward their ship, the Carnival Legend.

She began to record it on her phone.

“Ohhh, that’s really close,” she says, nervously. “Ohhh that stresses me out.”

Moments later, the back of the other ship smacked the bow of theirs, slicing through glass windows of the ship’s dining room.

“I hear people on the Royal Caribbean start like screaming and yelling,” Makenna said of a Royal Caribbean ship docked across from them. “And then all of a sudden, I hear this big loud bang and scraping noise, and at that point, our ship started to rock. And I was like, ‘Oh no!’”

Makenna immediately got her phone out again and began to record a second time. The end of the other ship drifts into view, and it’s clear that the back is completely damaged in one spot.

Makenna is obviously in complete shock and disbelief as she captured the moments after the two ships collided.

“It had taken out a whole chunk of their dining room,” Maddie said.

The sisters said their ship made an announcement that they had been crashed into, but only suffered cosmetic damage.

The ship let everyone off, and they said they looked at the damage up close. The two women said they also ran into passengers from the Carnival Glory who had been in the dining room before the crash.

“It was quite chaotic for them,” Maddie said. “They said some of even the staff members [were] kind of running over people to get out.”

After spending the day at a resort in Cozumel, Makenna and Maddie said they saw workers welding in the area of the hole before their ship left port.

Carnival released a statement, saying both cruise ships were still seaworthy and would continue their itineraries as planned.

The Morris sisters will spend a day at sea before arriving back in Tampa, where they’ll fly back to Utah.

They said the crash became the most exciting thing they saw on their trip.

“We decided when we get back, we’re going to have to make some shirts,” Maddie said. The shirts will say: “We survived the shipwreck of 2019.”