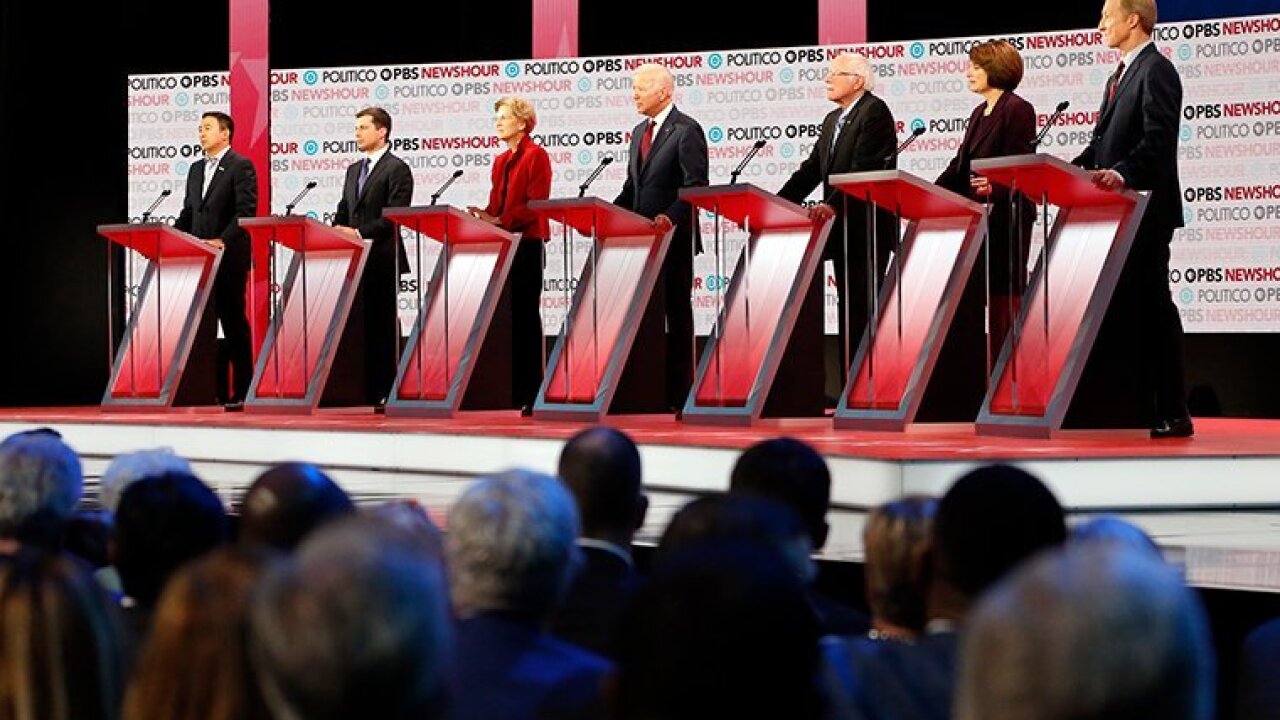 Seven Democrats met onstage December 19, 2019, in Los Angeles for the final debate of the year.

Thursday’s debate was hosted by PBS and Politico, and came a day after the House of Representatives impeached President Donald Trump. It also came the same day the House voted to approve Trump’s US-Mexico-Canada Agreement.

Just a month and a half before the Iowa caucuses, the three-hour debate offered candidates a chance to delve more deeply into their policy disagreements than they had in their five previous clashes.

Klobuchar said, “If you look at the poll[s], at the state that knows me best, and that is the state of Minnesota, it showed in the state that Hillary had her lowest margin of victory, it showed that I beat Donald Trump by 18 points.”

Facts First: She’s basically right about the polls, but she’s wrong about the 2016 election results.

In 2016, Hillary Clinton barely defeated Donald Trump in Minnesota, winning by 1.6 percentage points. It was extremely close, but it wasn’t her tightest margin of victory, as Klobuchar claimed. That state was New Hampshire, where Clinton won by about 0.4%.

Looking ahead to 2020, Klobuchar accurately cited a recent poll from her home state of Minnesota. An October poll from the Minneapolis Star Tribune, the largest newspaper in the state, found that Klobuchar would have a 17-point lead over Trump, which is a larger lead over the President than her Democratic opponents. (The poll had a 3.5% margin of error.)

Facts First: This is true, but only if you look back as far as the early 2000s. US manufacturing employment actually went up during President Barack Obama’s second term, and that’s continued under Trump.

The US lost 4.4 million manufacturing jobs between January 2000 and November 2019. The sharpest declines during this nearly two-decade stretch happened during the 2001 recession and between late 2007 and mid-2009 — that is, during the financial crisis.

Similarly, Iowa lost jobs during that period, shedding a total of 20,900 jobs, according to the Bureau of Labor Statistics.

But looking at a more recent time frame, manufacturing jobs increased, improving from a net loss of 5.8 million jobs from 2000-2010. During Obama’s second term, and following Trump’s election, the sector added positions.

The Bureau of Labor Statistics showed 385,000 additional manufacturing jobs were added between January 2013 and January 2017.

Since Trump took office, the sector has added another 497,000 jobs.

Iowa showed the same increasing trend for manufacturing positions, both in the lead-up to Trump’s election and since he took office.

That said, American factories have been suffering this year. The trade war has been weighing on business investment, demand for products and also hiring. The US manufacturing sector contracted for four months in a row through November, according to the Institute of Supply Management.

Asked about steps the US could take to address the rise of China, Biden said: “What we have to make clear is that we, in fact, are not going to abide by what they have done. A million Uyghurs, as you pointed out, Muslims, are in concentration camps. That’s where they are right now. They’re being abused.”

Facts First: Concrete numbers on this issue are hard to come by. But the latest numbers from the US government and human rights organizations support Biden’s claim.

The United Nations estimates at least 1 million of the Muslim minority Uyghurs are being held in “political camps for indoctrination.” In 2018, the US State Department estimated that anywhere from 800,000 to more than 2 million individuals are detained in these camps, which includes Uyghurs as well as members of other Muslim minority groups.

In July 2019, a senior Chinese official said most of the detainees had been released but refused to provide updated figures on how many people remained in the camps.

Documents leaked to The New York Times in November deeply undermine China’s claims the detention camps are for voluntary re-education purposes, but representatives of the Chinese government continue to dismiss the accuracy of such documents.

Klobuchar accused Republicans of trying to improve their chances in future elections by suppressing the African-American vote, which has historically gone in favor of Democrats by large margins.

“They have made it harder for African-Americans to vote,” Klobuchar said. “As one court said, ‘discriminated with surgical precision.'”

Facts First: Klobuchar got the quote right, and the rest of her claim is largely true. Republican-controlled legislatures across the country have passed laws aimed at preventing voter fraud that have made it harder for African-Americans to vote, and some of these laws have been declared unconstitutional by federal judges.

The federal Commission on Civil Rights said in a 2018 report that there was a surge in state laws that make it harder for minorities to vote. The report highlighted laws signed by Republican governors in states like Alabama, Arkansas, Missouri and several others. Those laws, which were aimed at preventing voter fraud, required voters to show government ID before casting a ballot, scaled back the availability of early voting, and eliminated voter registration options.

Klobuchar got the quote right. A federal appeals court struck down North Carolina’s voter ID law in 2016, and in their ruling, they said the law would “target African-Americans with almost surgical precision.” Alluding to the law’s racial motivations, the court said it “impose[s] cures for problems that did not exist.”

A separate federal court ruled that a similar law in Texas discriminated against black and Latino voters.

Klobuchar said she’d tackle the problem by trying to “stop the purging” of voters from the rolls, which became a major issue this month after purges in Wisconsin and Georgia.

But that might be easier said than done: Elections are run by the states, not the federal government. So if Klobuchar becomes president, she’d have limited influence over state officials who administrate elections and have overseen the recent purges.

In response to a question about being the only non-white candidate on stage, Yang pointed to statistics on disenfranchisement among communities of color, noting that “if you’re a black woman, you’re 320% more likely to die from complications in childbirth.” Sen. Bernie Sanders later echoed the claim, asserting that “black women die three times at higher rates than white women.”

Facts First: The candidates are correct — black women die from childbirth complications more than three times as often as do white women, according to government medical data.

The study showed that about 700 women die due to pregnancy-related complications in the United States each year.

Calling for an international effort to fight the climate crisis, Sanders criticized global spending on weapons.

“And maybe, just maybe, instead of spending $1.8 trillion a year globally on weapons of destruction, maybe an American president — i.e. Bernie Sanders — can lead the world. Instead of spending money to kill each other, maybe we pool our resources and fight our common enemy, which is climate change,” Sanders said.

Facts First: Sanders was speaking imprecisely. The $1.8 trillion figure represents all global military spending in 2018, not spending on weapons in particular.

Upon issuing the $1.8 trillion figure in April, the Stockholm International Peace Research Institute, an international authority on military spending, said it “discourages the use of terms such as ‘arms spending’ when referring to military expenditure, as spending on armaments is usually only a minority of the total.”