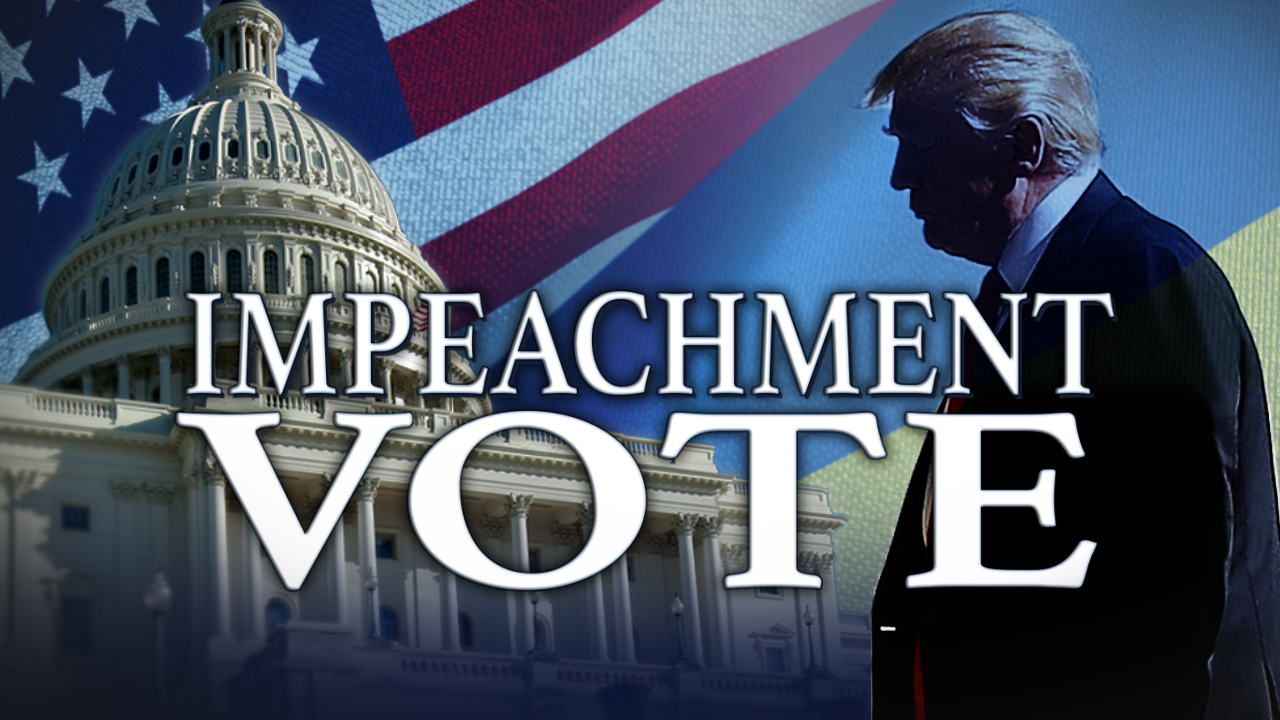 (CNN) — Members of the House of Representatives are debating Wednesday ahead of two historic votes on articles of impeachment that would make Donald Trump the third president in American history to be impeached.

The votes mark the culmination of a rapid three-month inquiry into allegations that the President pressured Ukraine to investigate his political rivals and withheld US security aid and a White House meeting. The inquiry led to charges that Trump should be removed from office on two impeachment articles: abuse of power and obstruction of Congress.

“We gather today under the dome of this temple of democracy to exercise one of the most solemn powers that this body can take: The impeachment of the President of the United States,” House Speaker Nancy Pelosi said Wednesday to kick off debate on the House floor. “If we do not act now we would be derelict in our duty. It is tragic that the President’s reckless actions make impeachment necessary. He gave us no choice.”

The bitter and contentious debate over Trump’s impeachment comes ahead of votes expected to fall almost completely along party lines. All Republicans are expected to oppose impeachment, and only three Democrats have signaled they will break ranks to vote against one or both articles, including one, Rep. Jeff Van Drew of New Jersey, who is planning to change parties.

House Judiciary Chairman Jerry Nadler, a New York Democrat who approved the impeachment articles in his committee, said that Trump had “broken his oath of office.”

“His conduct continues to undermine our Constitution and threaten our next election,” Nadler said. “His actions warrant his impeachment and demand his removal from office.”

But Republicans charged that Democrats were abusing the power of their majority to impeach the President less than a year before the presidential election.

“From the very moment that the majority party in this House won, the inevitability that we would be here today was only a matter of what date they would schedule it,” said Rep. Doug Collins of Georgia, the top Republican on the Judiciary panel. “We on the Republican side have no problem taking our case to the majority and to the people of this country because they elected Donald Trump, and it is a matter for the voters — not this House, not in this way, not in the way the way this is being done.”

As debate kicked off Wednesday morning, Republicans raised a series of procedural objections, forcing several roll-call votes on the floor before the debate on impeachment began.

The House approved the rule governing the impeachment debate just before noon, and the House will now debate the articles of impeachment for six hours. The vote was 228-197, with two Democrats, Van Drew and Rep. Collin Peterson of Minnesota, opposing it along with all Republicans.

It’s been 85 days since House Speaker Nancy Pelosi announced that Democrats would launch an impeachment inquiry after an anonymous whistleblower complaint alleged that Trump had solicited interference in a July phone call with Ukrainian President Volodymyr Zelensky to help his 2020 reelection campaign. Democrats say their investigation revealed a months-long campaign directed by the President and carried out by his personal attorney Rudy Giuliani for Ukraine to announce an investigation into former Vice President Joe Biden and his son Hunter Biden, along with the 2016 election. The President withheld US security aid and a one-on-one meeting that Zelensky sought, they say, and then obstructed the investigation by defying congressional subpoenas across the administration.

Trump has pushed back on the impeachment charges against him repeatedly on Twitter leading up to the vote. And he sent a blistering letter to Pelosi on Tuesday accusing Democrats of an “illegal, partisan attempted coup.”

“History will judge you harshly as you proceed with this impeachment charade,” he wrote.

The intense partisan debate over impeachment played out for hours on the House floor Wednesday in rapid-fire fashion ahead of the votes. In one-to-two minute speeches, Democrats and Republicans traded passionate arguments for why they were voting for or against impeachment. Back and forth they went: Democrats explaining the duty to impeach, followed by Republicans declaring that impeachment was a massive mistake.

Lawmakers on both sides referenced the Founding Fathers, the history being made with Wednesday’s votes and the ramifications they were leaving for their children and grandchildren.

It’s the same fight that the two parties have waged for the past three months in the closed-door depositions and committee hearings after Pelosi opened an impeachment inquiry on September 24.

At a morning meeting Wednesday, House Intelligence Chairman Adam Schiff privately told his colleagues that Republicans said they would limit the procedural objections in exchange for an extra hour of debate, according to a lawmaker who was present.

That’s why there will be six hours of floor debate on impeachment instead of five, as had been previously planned.

The House vote will shift the impeachment proceedings to the Senate, where Republicans control the majority. Senate Majority Leader Mitch McConnell on Tuesday predicted that the Senate would have a “largely partisan outcome,” after saying last week that he was coordinating with the President’s lawyers ahead of the trial.

McConnell told GOP senators at a policy lunch Tuesday that he will announce by the end of the week the date for the start of an impeachment trial in the Senate, sources told CNN.

McConnell and Senate Minority Leader Chuck Schumer are already clashing over witnesses in the Senate trial, expected to begin in January, after the Democratic leader requested four witnesses on Monday, including acting chief of staff Mick Mulvaney and former national security adviser John Bolton, to which McConnell objected.

This story has been updated with additional developments Wednesday.