Dash cam shows scary close call between semis on I-80 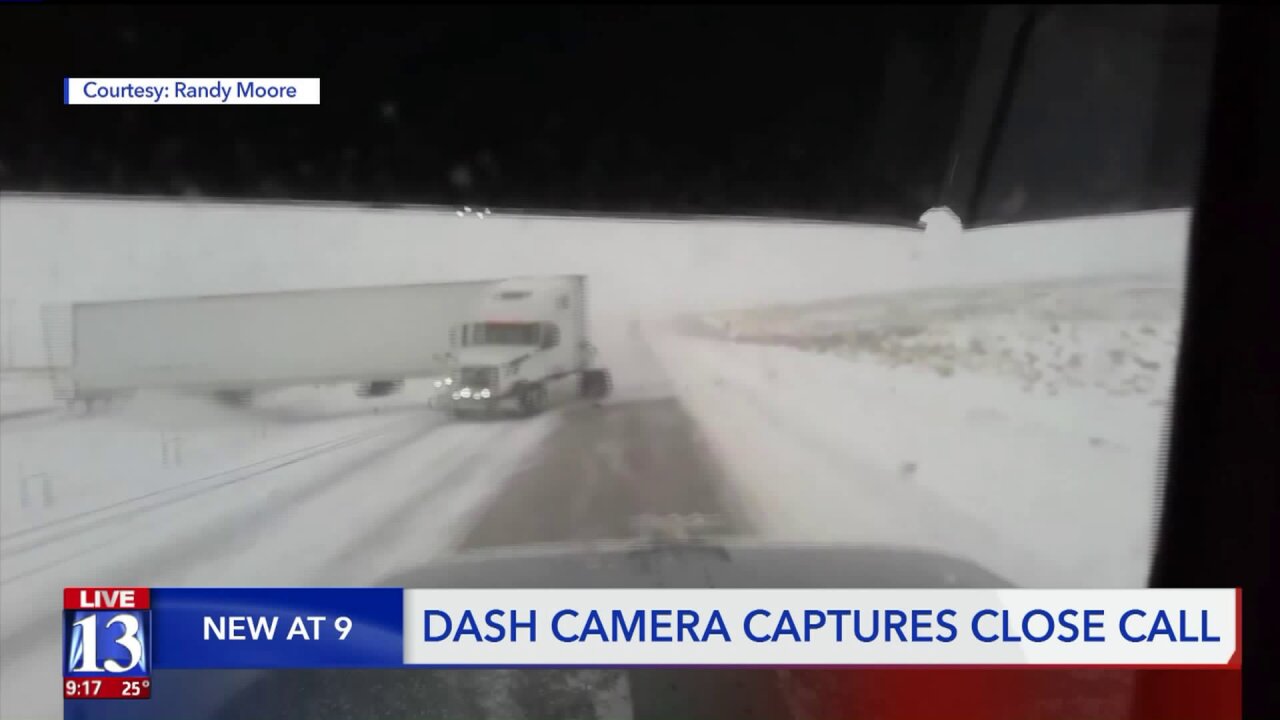 ROCK SPRINGS, Wyo. — A truck driver is recounting the scary moments when he narrowly missed hitting another semi head-on during icy conditions on I-80, and he’s got the dash camera footage that proves just how close of a call it was.

Randy Moore almost never made it to Utah last weekend. Instead, he can be grateful he’s okay.

Moore spoke to FOX 13 over FaceTime Tuesday as he sat in his truck at a truck stop parking lot in Pasco, Washington.

The route took Randy through Wyoming and Utah, where road conditions turned dangerous and slick. Randy explained he took off from Rawlins, Wyoming Saturday morning, and kept things nice and easy. He said he went a little slower than normal, and stayed alert.

“Just cruising along -- minding my manners, as I like to say,” Randy said.

Right around Rock Springs, which is about three hours east of Salt Lake City, Randy noticed a truck heading eastbound had started to slide.

The semi jack-knifed, hit the cable barrier, and flung out toward Randy’s truck as he cruised along at just over 55 miles an hour.

“It was 10 seconds of sheer terror,” Randy said.

His dash cam shows his truck fast approaching, as the semi flies into the oncoming lanes.

“I really thought I was going to hit him. Hit him head on,” Randy recalled. “All I was thinking at that point was, I want to try to miss him best I can without crashing myself.”

Right at the last moment, the cable appears to halt the semi from sliding over any further. Randy swerves slightly, and manages to squeeze by with just a few feet of room.

“It pulled him back like sling shot, just sucked him back up,” Randy said, of the cable barrier. “And that’s probably what kept me from hitting him.”

There’s no sound on the dash cam, but Randy said it’s for the best.

“For all the words I had to say,” he said, with a chuckle.

After Randy passes by the truck, he keeps going. He explained that he wasn’t sure if the driver was hurt, but considering Randy didn’t crash into him—he knows the driver is better off than he could have been.

FOX 13 reached out to the Wyoming Highway Patrol, but was not able to get an update on the crash, or on the driver of the truck.

“We were lucky. I mean, both of us,” Randy said. “The young man in that other truck, I can only imagine what went through his mind.”

Now, Randy is getting ready to head back on the same route toward his home state of Kansas. He said he hopes to make it home just in time to spend the holidays with his family — safely, all in one piece.