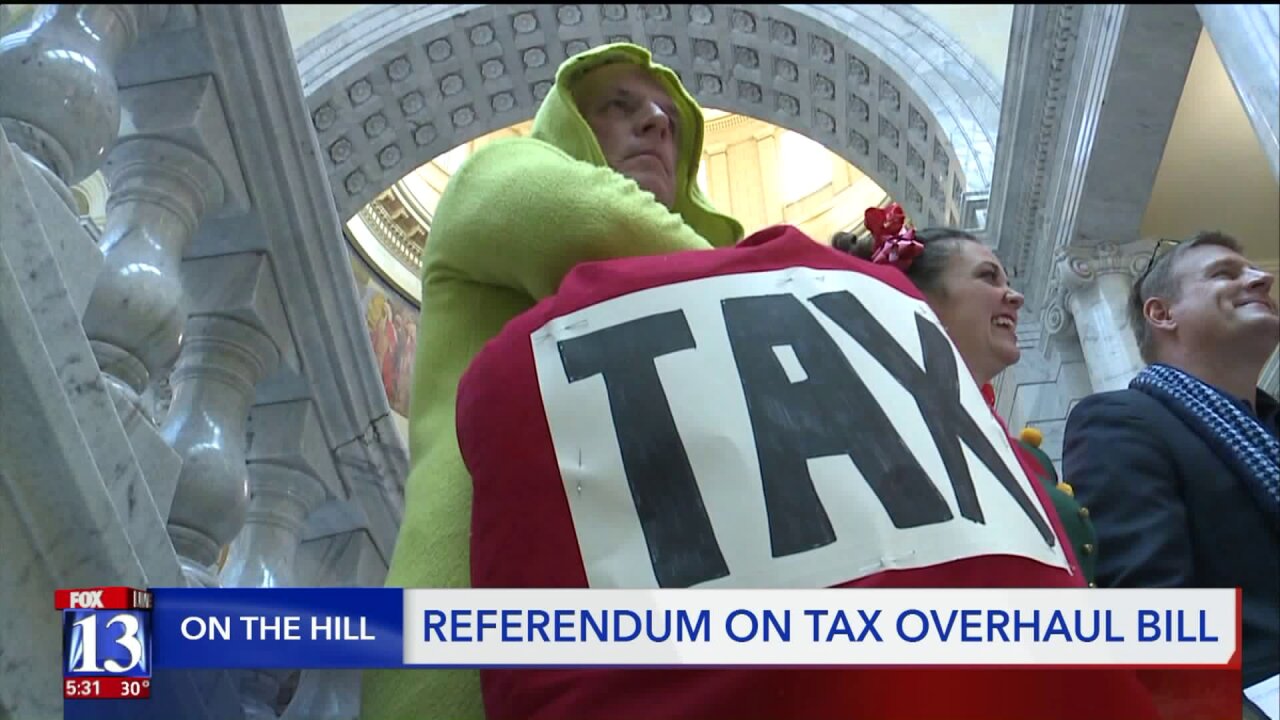 The referendum was quietly filed on Monday morning as the Lt. Governor's Office opened for business. Backers include former Republican state representative Fred Cox and Gina Cornia of Utahns Against Hunger.

"It’s really important that voters feel heard," Cornia said in an interview with FOX 13 on Monday. "We want to support efforts to make sure that the legislature understands that one, we continue to oppose it and we think voters should continue to have a say in what they did."

In order to qualify, the referendum must collect more than 115,869 signatures across the state by January 21. Those signatures must also be validated.

The legislature passed a massive tax bill last week in special session, cutting Utahns' income taxes but hiking the sales tax on food, gas and imposing new taxes on some services. The bill failed to pass with a two-thirds majority, making it subject to a citizen referendum.

Republican leaders on Capitol Hill have argued the tax bill is necessary to fix a structural imbalance. The income tax is earmarked exclusively for education, but the sales tax pays for everything else and has seen declines in recent years.

Lawmakers have argued the state is headed for potential crisis without the bill to ward off. However, their plans have not been popular. The legislature has faced significant public pushback, mostly over hiking the food tax and the sales tax on some services.

Speaking to reporters last week, House Speaker Brad Wilson, R-Kaysville, said he doubted voters would repeal the tax bill once they saw the income tax cut they were getting.

"We saw unprecedented citizen engagement and addressed many concerns we heard throughout this process. Our goal was and will continue to do what is right for Utahns and our state both now and in the future," Senate President Stuart Adams, R-Layton, said in a statement Monday to FOX 13. "This tax reform bill is a result of a robust public process that provides Utahns with a significant tax cut, helps stabilizes our base and begins to address the structural imbalance in the state budget."

The referendum will be going forward without a powerful advocacy group on Capitol Hill. The Utah Education Association, the state's largest teachers union, told FOX 13 on Monday it will not be participating. The UEA has significant financial resources at its disposal, as well as a veritable army of teachers who could gather signatures.

"There is no way I will ask them (teachers) to gather signatures over their holiday break. We ask too much of them," UEA President Heidi Matthews said. "Also, we advocate for public education and this bill, while indirectly impacting the education funds, is not complete. We want to use our resources and our energy going into the regular session and really hold our legislators feet to the fire for what they have promised, which is growing investment in public education."

"We already have 1900 volunteers," Cox posted on Twitter. "Just waiting for an approved signature packet from the lt gov office."

The application for the citizen referendum indicated the backers would not use paid signature-gatherers. The group said it would rely on volunteers to help out and was coordinating them through a Facebook group.