Six people killed, including one officer, in Jersey City standoff 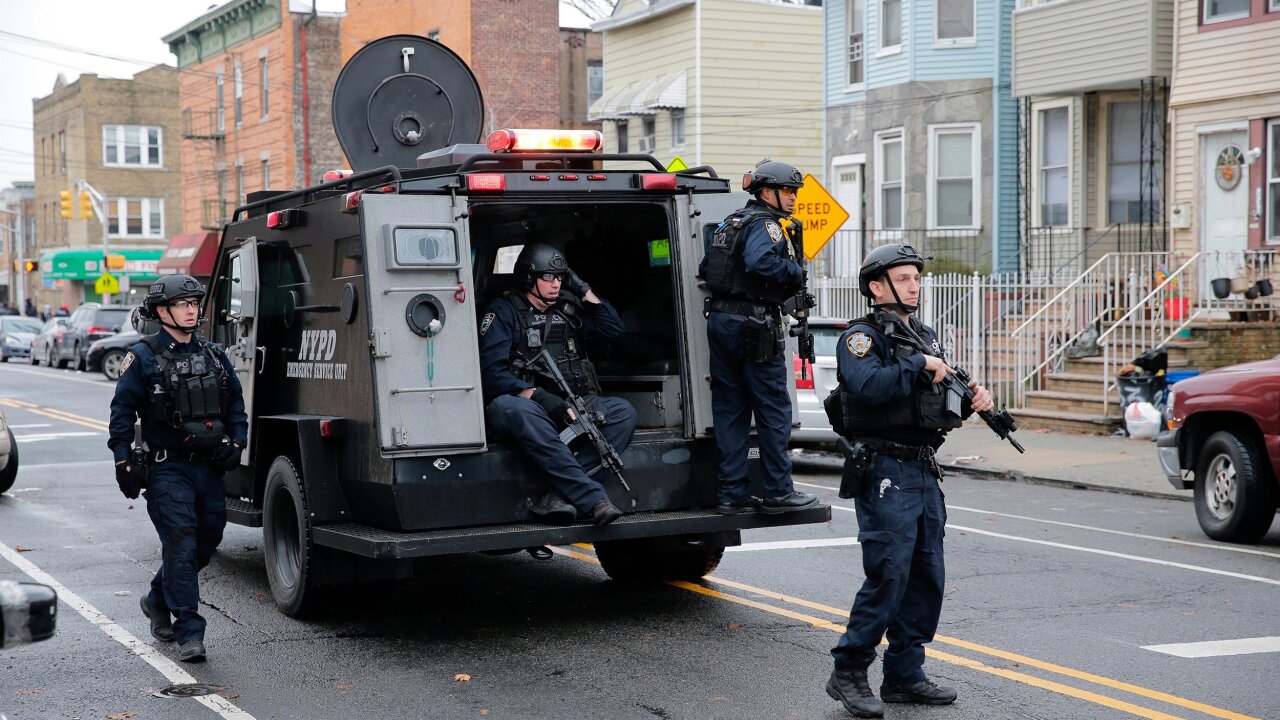 New York City Police officers arrive on the scene following reports of gunfire. At least one police officer was fatally shot and multiple others wounded during the standoff in Jersey City, NJ. Source: Seth Wenig/AP

Jersey City Police Chief Michael Kelly said the six dead included two suspects and three people believed to be civilians who were found inside a building.

Seals was part of a statewide anti-violence unit. He was credited with removing “dozens and dozens” of handguns from the streets, Kelly said.

“We believe he was killed while trying to interdict these bad guys,” Kelly told reporters.

The shooting started about 12:30 p.m. in one part of the city — drawing reinforcements from neighboring jurisdictions and virtually shutting down schools and commerce in some areas, police said.

The gunplay continued for hours before authorities announced the suspects had been killed during a tense standoff with police in another part of town, Kelly said.

Kelly praised the response by various agencies, whose members took on a fusillade of high-power rifle fire from the suspects.

“The investigation will take weeks, maybe months,” he said. “The crime scene is very extensive and is at three locations, at least.”

Two officers and one civilian were in stable condition after being struck by gunfire, Hudson County Prosecutor Esther Suarez said via Twitter.

Kelly identified the wounded officers as Ray Sanchez and Mariela Fernandez. They were both treated and released.

A stolen U-Haul truck that is part of the investigation may contain an incendiary device and was being examined by the bomb squad, Kelly said.

The officer who was killed is believed to have been ambushed, according to a law enforcement source.

A source had earlier said at least one shooter had been “neutralized” inside a bodega.

Law enforcement sent in a robot to have eyes and ears inside the store where shots were fired, the source said.

Gov. Phil Murphy said earlier he was being briefed on the situation as it unfolded.

“Our thoughts and prayers are with the men and women of the Jersey City Police Department, especially with the officers shot during this standoff,” Murphy said.

The ATF office in Newark tweeted Tuesday that agents responded to “reports of an active shooter.”

The New York Police Department’s Emergency Service Unit also responded, according to a law enforcement official familiar with the incident.

No one was in custody in connection with the shooting, according to a law enforcement official.

The chaotic scene unfolded on city streets with bursts of gunfire and blaring sirens heard as heavily armed officers moved in, according to social media video.

Continuous gunshots could be heard in Jersey City for at least 20 seconds prior to 2 p.m., according to a CNN producer at the scene.

At least three armored personnel vehicles were on scene, according to the producer. A paramedics truck also responded as helicopters hovered above.

CNN affiliates reported that the shooting occurred in the area of Martin Luther King Drive in Jersey City, across the Hudson River from Manhattan. Several roads were closed and schools were on lockdown.

The New Jersey State Police Benevolent Association tweeted: “We need a lot of prayers right now for Jersey City officers. Keep all those involved in your thoughts.”