In Paris, Putin and Zelensky take hesitant steps toward peace 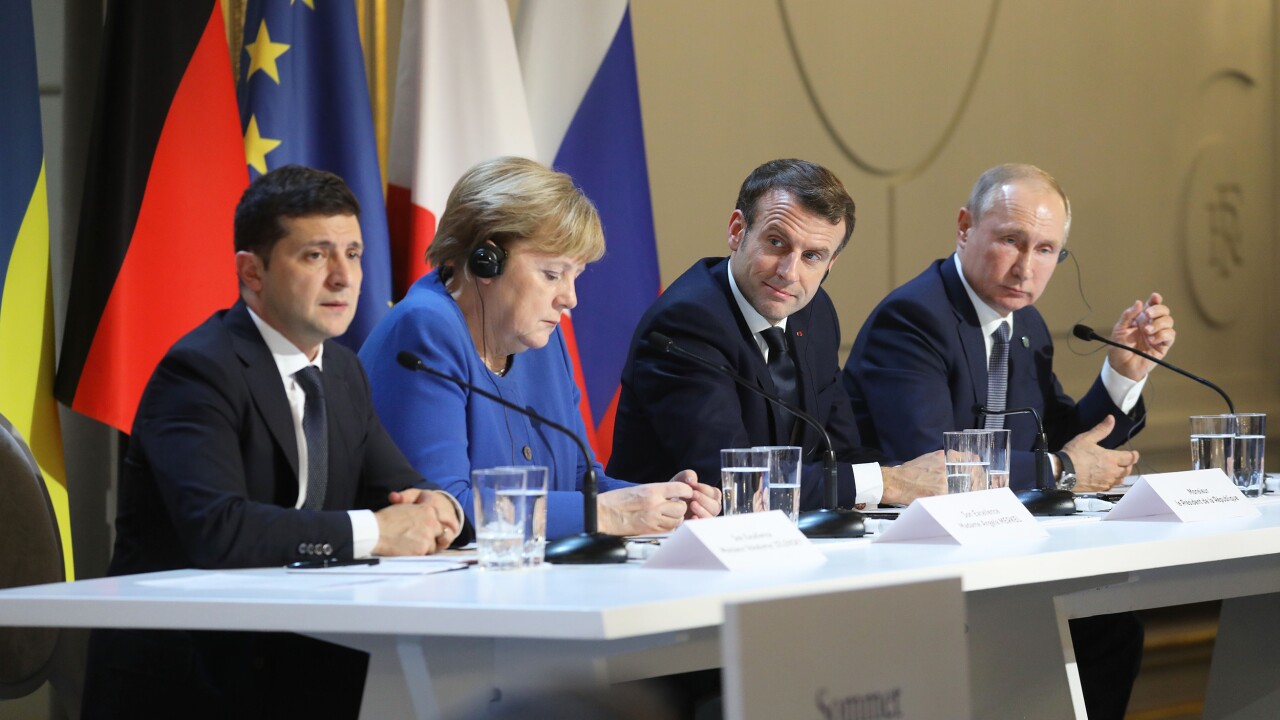 (FromL) Ukrainian President Volodymyr Zelensky, German Chancellor Angela Merkel, French President Emmanuel Macron and Russian President Vladimir Putin give a press conference after a summit on Ukraine at the Elysee Palace, in Paris, on December 9, 2019. – Leaders aim for new withdrawal of forces from Ukraine conflict zones by March 2020, according to a communique on December 9, 2019. (Photo by LUDOVIC MARIN / POOL / AFP) (Photo by LUDOVIC MARIN/POOL/AFP via Getty Images)

The leaders of France, Germany, Ukraine and Russia met in Paris for five and a half hours of talks on Monday, producing at the day’s end a joint communique that said all parties would “commit to a full and comprehensive implementation” of a ceasefire in Ukraine by the end of the year.

French President Emmanuel Macron and German Chancellor Angela Merkel took part in the negotiations, but all eyes were on Ukrainian President Volodymyr Zelensky and Russian President Vladimir Putin, who represent opposing sides in a five-year war that has claimed the lives of around 13,000 people.

Russia and Ukraine have been locked in a proxy conflict that began in 2014, when Russia occupied and annexed the Crimean peninsula from Ukraine and backed pro-Russian separatists in the Donbas region. Russia has never openly acknowledged that it is a belligerent in the conflict, although Ukraine and its Western backers say Moscow has sent military hardware, advisors and even conventional military forces to support the separatists.

Monday’s meeting was the first between the Ukrainian and Russian presidents since Zelensky took office earlier this year in a landslide election victory. The two leaders have already taken steps toward compromise: They recently hammered out a deal for a prisoner swap that paved the way for Monday’s meeting.

In Paris, the pair committed to an important new step, pledging to work toward local elections in the separatist regions of eastern Ukraine. But they avoided the thorny issue of when, exactly, that might happen.

They remain far apart on the timing of elections to determine the status of territory currently controlled by separatists. At a press conference at the conclusion of the summit, Zelensky said Ukraine insists on full control of his country’s eastern borders before such an election can take place, while Putin said that elections should come first.

“The president of the Russian Federation and I have a different view of the transfer of the border,” Zelensky said. “I’m saying the issue of border transfer should take place before the local elections.”

The meeting was a study in contrasts, with Zelensky arriving in a low-key Renault and Putin in an armored black limousine.

The Russian president is a practiced hand at this kind of international summitry: He has been on the international stage for two decades now, and he understands the element of theater that goes into such highly scripted meetings. Russian state television repeatedly showed a clip of Putin prodding Zelensky to turn around for a photo spray.

“It’s good, I’m pleased,” a relaxed-looking Putin told reporters as he walked past the press center and answered questions about his one-on-one talks with Zelensky.

But while Zelensky may be the geopolitical novice, he also has advantages. He enjoys a broad popular mandate, despite a recent slip in the polls. And he represents a younger alternative to the increasingly geriatric post-Soviet leadership currently running Russia, and he can engage with Putin in his own language.

It’s also clear what Monday’s meeting does not represent. Ukraine does not get back Crimea, something considered non-negotiable by Moscow.

And Russia will not see a lifting of European sanctions that were imposed after the annexation of the semi-autonomous region in 2014.

“People in Eastern Ukraine have been waiting much too long for peace,” German Foreign Minister Heiko Maas said in a statement earlier on Monday. “At the moment [there is] no reason to change EU sanctions regime.”

A one-on-one session between Putin and Zelensky in Paris did not resolve the biggest issue of who will control Ukraine’s eastern border when elections happen in separatist regions. But it did, at least, show the two leaders could engage in dialogue.