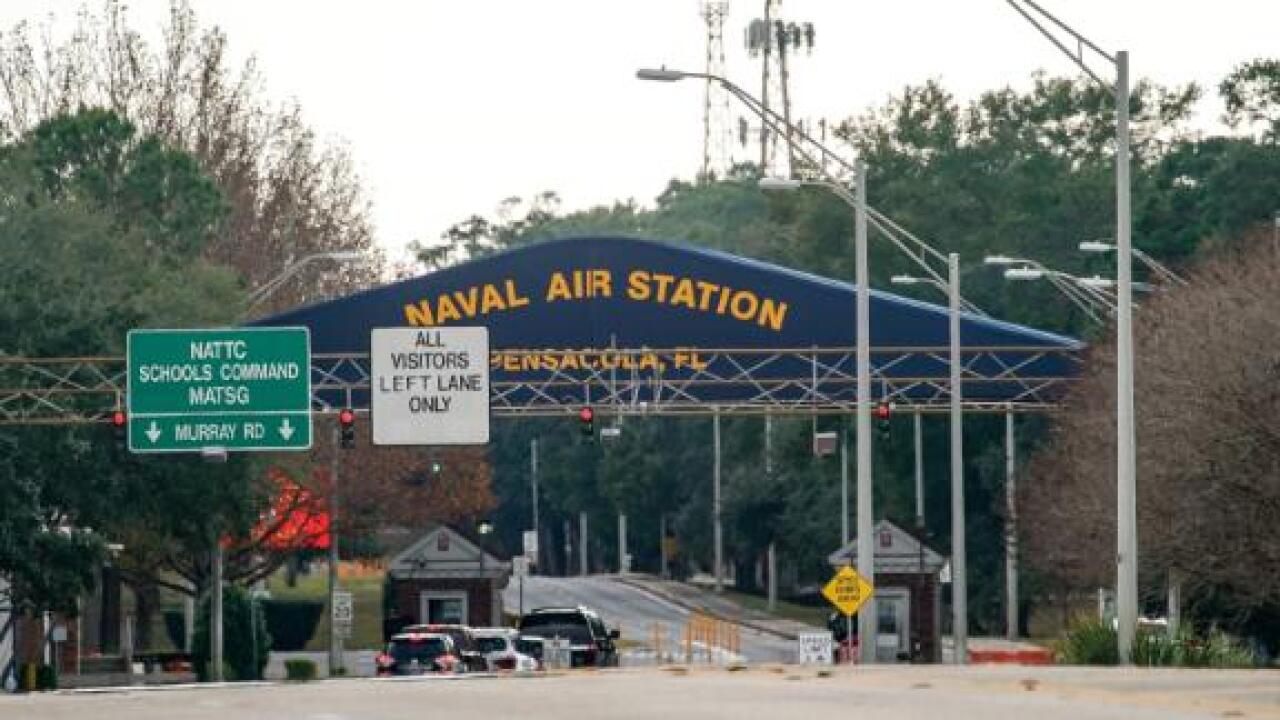 PENSACOLA, FLORIDA – DECEMBER 06: A general view of the atmosphere at the Pensacola Naval Air Station main gate following a shooting on December 06, 2019 in Pensacola, Florida. The second shooting on a U.S. Naval Base in a week has left three dead plus the suspect and seven people wounded. (Photo by Josh Brasted/Getty Images)

Over the weekend, US officials stressed that the investigation is in its early phases, and that they were working to determine the gunman’s motive. “We don’t know yet if he was acting alone. The FBI is investigating, and they’ve been interviewing, interrogating other Saudi students,” national security adviser Robert O’Brien said on CBS’ “Face the Nation” on Sunday morning.

“To me, it appears to be a terrorist attack,” O’Brien said.

Rachel Rojas, the FBI special agent leading the investigation, said at a press conference that to take advantage of certain “investigative techniques,” the FBI is working with “the presumption that this was an act of terrorism.” She added, “Members of the FBI’s Joint Terrorism Task Force and the FBI’s Counterterrorism Division are working tirelessly to discern if any possible ideology that may have been a factor in this attack.”

The FBI has identified the shooter, who was killed by responding law enforcement agents, as Mohammed Alshamrani, a 21-year-old second lieutenant.

Just minutes before authorities were first alerted to the deadly shooting, a Twitter account aligning with his name posted a message that raises the possibility the attack was inspired by al Qaeda and its founder, Osama bin Laden.

In recent years, jihadi attackers have mostly been animated by sympathy to ISIS, but the group never seemed to eclipse al Qaeda inside Saudi Arabia, despite the more than 3,000 Saudis who, according to The Soufan Center, traveled to Iraq and Syria to join ISIS and other groups.

While many jihadis around the world gravitated toward ISIS after they declared a caliphate in Syria and Iraq in 2014, Abu Bakr al-Baghdadi’s terrorist group never attracted the kind of support that bin Laden did among jihadis in the kingdom, nor posed anything like the threat al Qaeda’s 2003-2006 terror campaign posed the House of Saud.

With al Qaeda maintaining significant support in Saudi Arabia, there will be concern the attack in Florida may provide an opportunity for it to strengthen its standing among global jihadis in the wake of ISIS losing its land and its leader. Thousands and thousands have been killed in terror attacks carried out by the two groups around the world over the years.

The first call alerting law enforcement of an incident at the Florida base came about 6:51 a.m. (7:51 a.m. ET), according to the Escambia County Sheriff’s Office.

Twelve minutes before, at 6:39 a.m., a Twitter account with the handle @M7MD_SHAMRANI posted a message addressed to the American people, declaring hate for Americans because of their “crimes” against Muslims.

CNN has been unable to verify the source of the tweet which was previously reported on by SITE Intelligence Group. Law enforcement has not commented on it.

However, given the shooter was training at a US naval air station, it is notable that the Twitter account @M7MD_SHAMRANI re-tweeted a Military Times post about last month’s fatal crash at Vance Air Force Base in Oklahoma.

The Twitter message posted Friday morning made no reference to an impending attack.

Several aspects to what was written in the message point toward al Qaeda inspiration.

The Twitter message stated, “America as a whole has turned into a nation of evil.”

Those were the exact words American terrorist cleric Anwar al-Awlaki used in a message posted in March 2010 in calling for jihad against the United States, suggesting the person posting the message was deeply familiar with al-Awlaki’s propaganda.

Before he was killed in a drone strike in September 2011, al-Awlaki had become a senior figure in al Qaeda’s affiliate in Yemen. In the years before and since his death al-Awlaki’s online sermons provided inspiration for many of those plotting jihadi terror in the West.

The words of bin Laden also appear to have influenced the individual posting the Twitter message.

In January 2010, bin Laden stated in an audio message, “The United States will not dream of enjoying safety until we live it in reality in Palestine.”

“You will not be safe until we live it as reality in pleastain [sic], and American troops get out of our lands,” read the message posted Friday morning.

It has been well documented that the presence of US troops in Saudi Arabia in the 1990s created great anger among jihadi sympathizers in Saudi Arabia. It was a key factor in turning bin Laden toward confronting the US. The attack in Florida comes at a time when the US is again building up its troop presence in the kingdom. The Pentagon announced in October that it is set to deploy 1,800 more troops.

The Twitter message posted Friday made repeated reference to US support for Israel, another key theme of al Qaeda propaganda as illustrated by bin Laden’s January 2010 statement.

In recent months, the @M7MD_SHAMRANI Twitter account retweeted at least one news article alleging Israeli mistreatment of Palestinians. The penultimate tweet from the handle, which the account’s timeline indicates was posted this month, was a retweet of a Times of Israel tweet from December 2017 containing the “Full Text of Trump’s speech recognizing Jerusalem as capital of Israel.”

In recent years, al Qaeda has attempted to incite and exploit anger in the Muslim world over the issue. For example, the Trump administration’s decision to relocate the US embassy to Jerusalem was seized upon by al Qaeda leader Ayman al-Zawahiri when he called for continued confrontation with the United States in a message posted on the 17th anniversary of the 9/11 attack.

No group has claimed responsibility for attack

Although the Twitter message posted by the @M7MD_SHAMRANI account made no explicit mention of al Qaeda, its repurposing of the words of bin Laden and Awlaki suggests the shooter may have been deeply familiar with the statements of al Qaeda leaders, may have been to some degree inspired by them, and may deliberately have chosen to use their words.

Establishing the complex mix of factors that are likely to have inspired the Florida attack is not straightforward.

The decision to quote bin Laden and Awlaki does not definitively indicate al Qaeda provided the main inspiration. Unlike al-Qaeda’s leader Ayman al-Zawahiri, who is a hate figure in ISIS circles, both bin Laden and al-Awlaki, who died three years before ISIS declared it had established a caliphate, have been revered by ISIS’s supporters.

By Saturday afternoon, no terrorist group had claimed the Florida attack.

In the years after ISIS captured global headlines by taking control of large swaths of Syria and Iraq, the large majority of attacks by jihadi sympathizers in the West appeared to be inspired by ISIS rather than al Qaeda. Online pledges of loyalty made by attacker after attacker to ISIS leader Abu Bakr al-Baghdadi gave ISIS openings to claim ownership of many of the attacks.

But ISIS’s position as the lodestar of the global jihadi movement is now in question. It was notable that Usman Khan, who killed two in the vicinity of London Bridge last month, made no online pledge to ISIS. Khan had initially been radicalized by al Qaeda propaganda.

In 2012, Khan and several other extremists were convicted in relation to a plot to attack the London Stock Exchange “inspired by the ideology and methodology of Anwar Al Awlaki,” according to court documents.

In the wake of ISIS’s loss of all its territorial holdings in Syria and Iraq and the death of its leader in October, a concern will be the Florida attack may have provided al Qaeda an opening to strengthen as it competes with ISIS for leadership of the global jihadi movement.