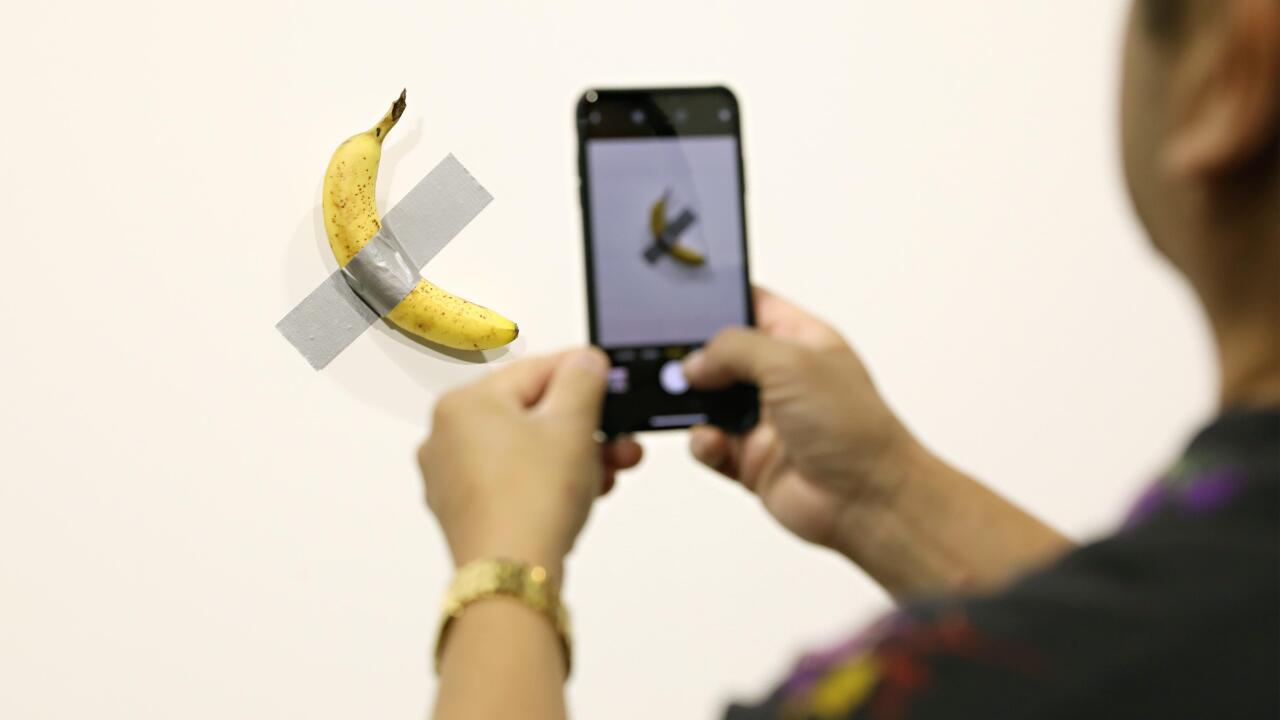 Entitled “Comedian,” the artwork comprised a banana bought in a Miami grocery store, and a single piece of duct tape. There were three editions, the gallery said, adding that two had already sold for around $120,000. Source: Cindy Ord/Getty Images North America/Getty Images

(CNN) — When an artist duct-taped a banana to a wall and priced it at $120,000 this week, we should probably have known where the story was heading.

The work, by Maurizio Cattelan, was ripe for the picking — and on Saturday, it was unceremoniously taken off the wall at the Art Basel Miami Beach and eaten by a performance artist, amid a crowd of stunned onlookers, some of whom posted videos of the incident.

“I really love this installation. It’s very delicious,” David Datuna wrote on Instagram, alongside a video showing the aftermath of his stunt.

As people gather and film the incident, a woman can be seen remonstrating with Datuna before asking for his name.

Entitled “Comedian,” the artwork comprised a banana bought in a Miami grocery store, and a single piece of duct tape. There were three editions, the gallery said, adding that two had already sold for around $120,000.

It’s unclear whether the banana being eaten will detract from the artwork’s value, or whether Cattelan plans to buy more bananas and start again. CNN has contacted the gallery for comment.

Prior to the reported sale, the gallery’s founder Emmanuel Perrotin told CNN the bananas are “a symbol of global trade, a double entendre, as well as a classic device for humor,” adding that the artist turns mundane objects into “vehicles of both delight and critique.”

The artists did not provide potential buyers with instructions on what to do when the artwork starts to decompose.

According to a press statement from Galerie Perrotin, the artist first came up with the idea a year ago.

“Back then, Cattelan was thinking of a sculpture that was shaped like a banana,” it reads. “Every time he traveled, he brought a banana with him and hung it in his hotel room to find inspiration. He made several models: first in resin, then in bronze and in painted bronze (before) finally coming back to the initial idea of a real banana.”

Cattelan is known for sculptures that challenge popular culture. One of his artworks — an 18-carat-gold toilet valued at around $6 million — made headlines in September when it was ripped out of a wall and stolen from Bleinheim Palace in England.