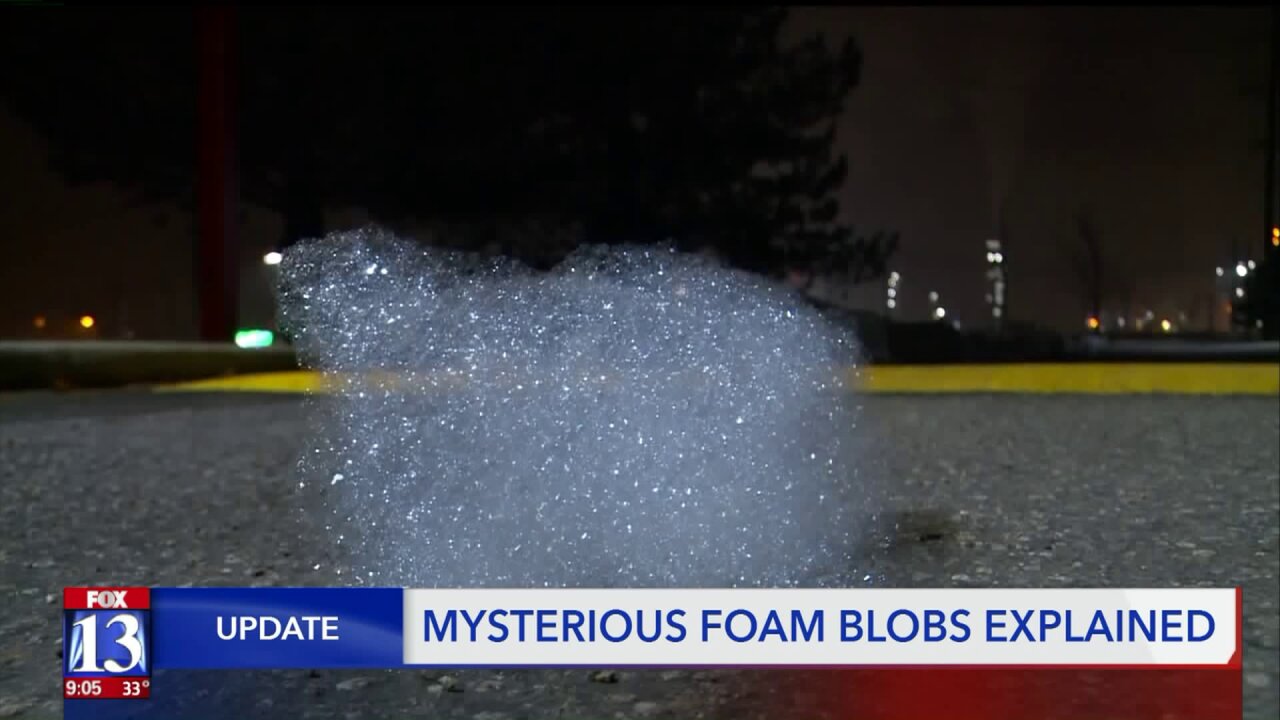 According to people who work in the area, the sudsy masses rained all over the area of Beck Street off and on for a few hours.

They wondered if it was some sort of phenomenon or a mishap at the nearby Marathon Petroleum Refinery.

Refinery spokespeople cleared the soapy air on Friday night, explaining what happened that led to bathing the area in bubbles.

The foam floated through the air during the inversion and fog. Buffy Ogden said she and a co-worker watched what looked like giant chunks of Styrofoam land on the ground and on the salt piles of the Salt Lake City Streets Department yard.

“We all thought we were on drugs,” Buffy said. “We've never seen anything like this!”

It tripped Buffy and her co-worker out. Buffy got out her phone and took pictures and video of the white fluff.

“These look like airplanes or UFOS,” Buffy says, in her video. “They're giant bubbles.”

Theresa Foster said she swerved to avoid hitting what looked like a huge chunk of ice on Beck Street. She quickly realized it wasn’t an ice chunk, and noticed massive bubbles — some waist high — off the side of the road. They were also all over at her work.

“I was like looking at them and walking across the parking lot, to, like, go poke them and see what it was,” she said.

Someone even asked Theresa to taste the mystery froth.

She did pick them up, wondering what they were made of.

“Anti-foaming agent was added to the system to eliminate the formation of foam,” he wrote.

Brad Shafer, Sr. Manager of Government and Public Affairs at Marathon, told FOX 13 that they have no idea what caused the suds to lift off the tower and into the air.

Because of the fog and inversion, he indicated, they didn’t immediately detect what was happening and weren’t sure how long the towers were releasing foam into the air.

He likened it to dish soap that foams up in a kitchen sink and explained that it’s harmless to health and the environment.

Even with the mystery solved, the bubbles still mesmerized Buffy and Theresa.

“Everyone is, like, fascinated with the bubbles. It was so weird,” Theresa said, as she laughed. “I'm like, ‘Yay! Happy Friday — here's some bubbles!’”