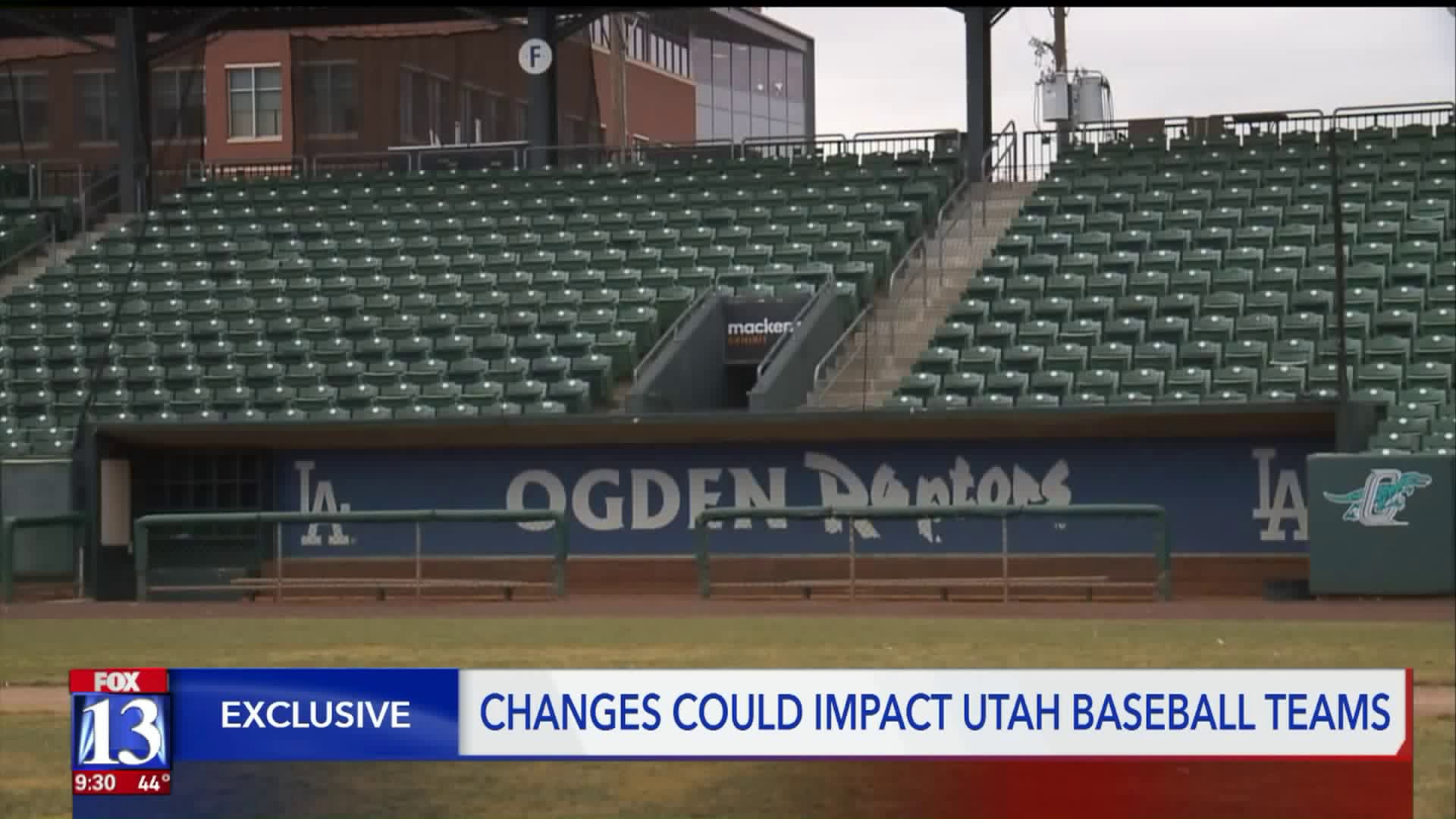 A radical proposal being discussed by Major League Baseball could have an impact on two teams in Utah. 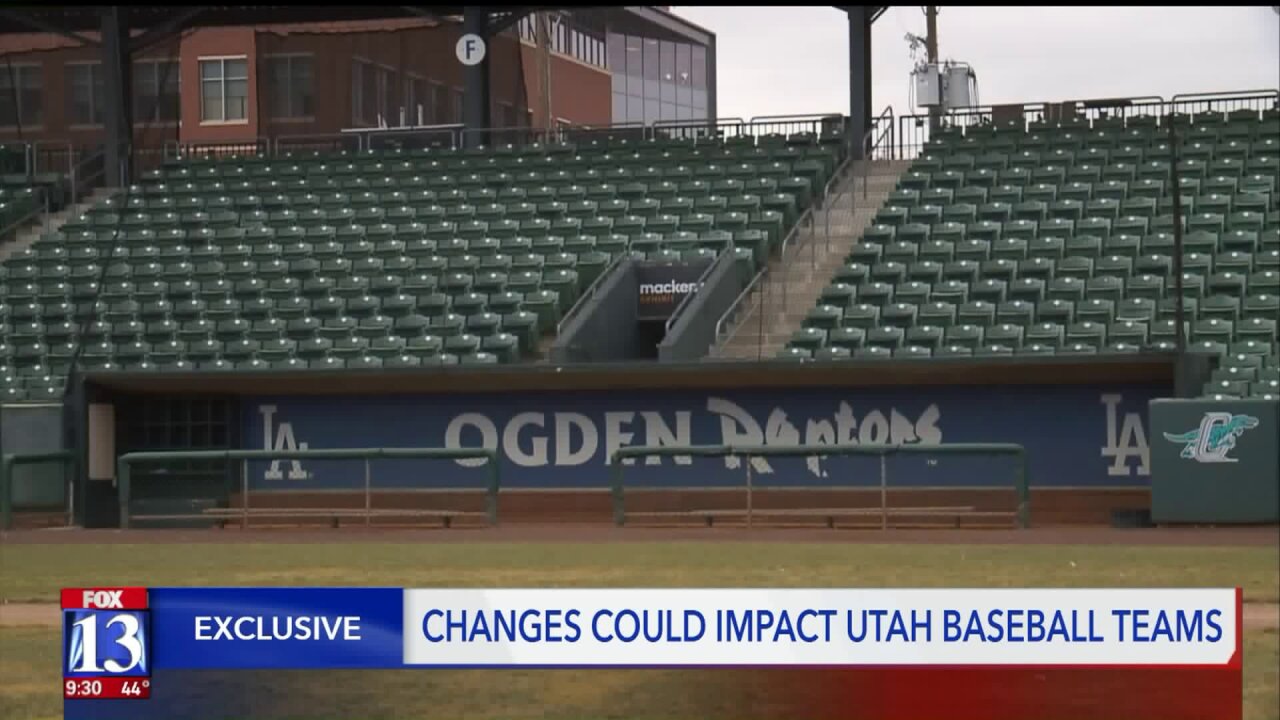 OGDEN, Utah — A radical proposal being discussed by Major League Baseball could have an impact on two teams in Utah.

According to a report in the New York Times, the league is considering cutting ties with more than 40 of its lower minor league affiliates. One of those teams is the Ogden Raptors.

The Raptors have been a fixture in downtown Ogden since 1994. The team’s longtime co-owner Dave Baggott has devoted his entire life to the game of baseball and didn’t expect this news to develop during the offseason.

“I had to look to see if it was April 1st,” Baggott said. “I thought it was an April Fool’s joke.”

Officials with Major League Baseball and Minor League Baseball are negotiating a new deal that would begin following the 2020 season. Currently, the Raptors are an affiliate of the Los Angeles Dodgers — a relationship dating back to 2003.

Through the years, Baggott has watched more than 3-million local fans pass through the gates of Lindquist Field to be entertained by players on the path to the Big Leagues. Tickets to a game in Ogden sell for a fraction of the cost of an MLB game.

“One former Raptor was just named last week, the National League player of the year, Cody Bellinger,” Baggott said. “There is always a saying, if you got a uniform, you got a shot.”

According to the report in the New York Times, Major League Baseball is looking to cut costs, by cutting the number of players in each team’s minor league system, while shrinking the size of the Major League Baseball draft. If MLB decides to follow through with the plan, the league would no longer need lower-level teams like the Ogden Raptors. Baggott is hopeful a deal can be reached that maintains the status quo.

“Right now, it’s an inconvenience. There is always a concern when you are talking about being part of an industry that is looking at things differently,” Baggott said. “The smart people will get in the room and they will come up with an agreement."

If the Raptors lose their affiliation, Baggott is determined to keep the team alive.

“We’d have to play as an independent, and we would,” Baggott said. “The Ogden Raptors are going nowhere. We will be playing as usual in 2020 and we will continue playing beyond 2020.”

He notes, the first two seasons of the team’s existence in 1994 and 1995 were spent as an independent.

In a quarter of a century, Baggott has witnessed the growth of downtown Ogden. He says the team has helped bring the area to life.

“I remember when we first came here, nobody wanted to come to downtown Ogden. Now, the entire city is revolving around downtown Ogden and it’s only going to get bigger,” Baggott said. “The ballpark brings communities together. It doesn’t matter what your background, the ballpark is there for everybody.”

It’s unclear when a deal could be finalized and teams like the Raptors learn their fate.

Whatever happens, Baggot is confident professional baseball will remain in Ogden in some form.

“We are going to be here forever,” Baggott said.

The Orem Owlz were also listed by the New York Times as another team that could lose its affiliation.

The potential change is making waves on the Presidential campaign trail.

Democratic candidate Sen. Bernie Sanders (D-Vermont) issued a statement saying, "Closing down Minor League teams like the Ogden Raptors and Orem Owlz would be a disaster for baseball fans, workers, and communities across Utah. We must protect these teams from corporate greed."

FOX13 reached out to Major League Baseball for comment and as of publication, have not heard back.

The Raptors released this official statement:

“Over the past several weeks, multiple media outlets have written stories about the reduction of Minor League Baseball teams for the 2021 season, which would include the Ogden Raptors and 41 other clubs throughout the United States. MLB and MiLB are still early in the negotiations, and thus, nothing has been finalized and may not be for quite some time. Although MLB has stated publicly that their main concerns are facility standards, club travel, and proximity to an MLB affiliate, the Raptors currently meets MLB’s facility standards and has good travel within the Pioneer League. We recognize the press surrounding this is hard to ignore, but we want to stress that it is business as usual for the Ogden Raptors in 2020 and we be playing Professional Baseball in 2021 and beyond.”