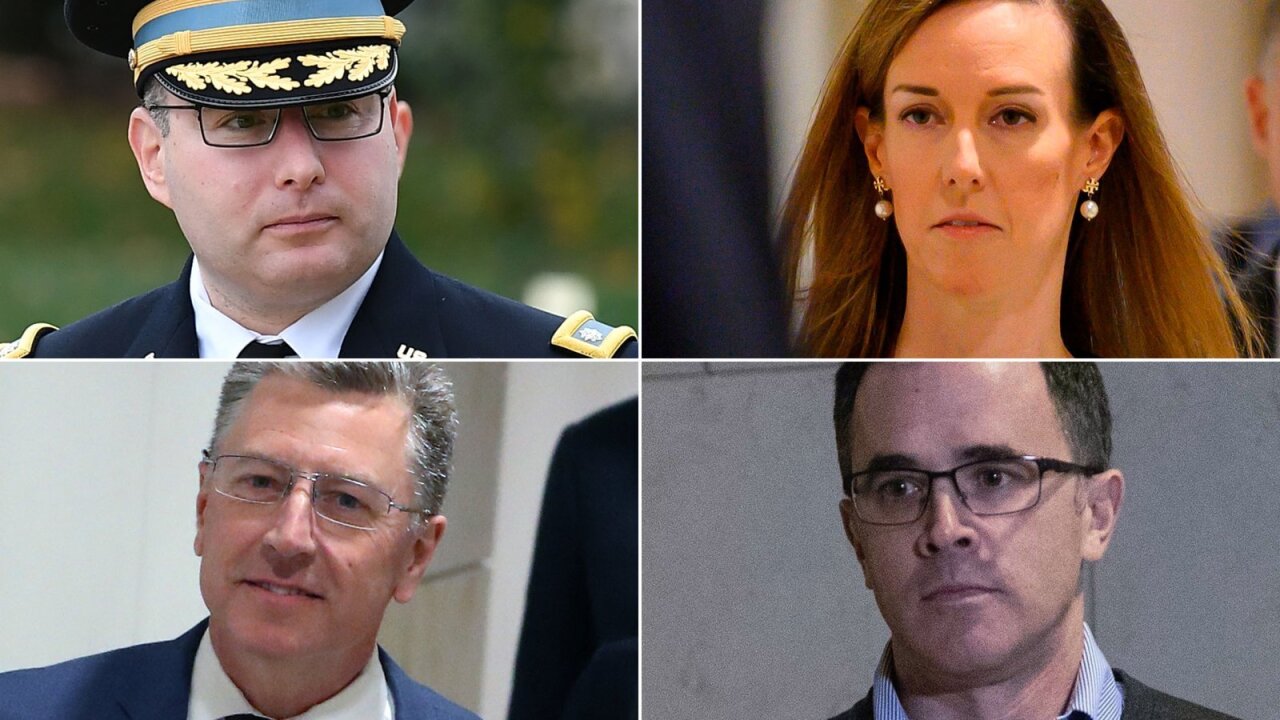 The National Security Council’s top Ukraine expert Lt. Col. Alexander Vindman and Jennifer Williams, an aide to Vice President Mike Pence, are testifying Tuesday morning, while former US special envoy to Ukraine Kurt Volker and Tim Morrison, a former a top Russia and Europe adviser on the National Security Council, appear together in the afternoon.

Impeachment investigators will hear publicly from nine witnesses at five impeachment hearings over the next three days as Democrats race to collect public testimony this week about President Donald Trump’s role in pushing Ukraine to open investigations and the withholding of US security aid and a one-on-one meeting.

The National Security Council’s top Ukraine expert Lt. Col. Alexander Vindman and Jennifer Williams, an aide to Vice President Mike Pence, are testifying Tuesday morning, while former US special envoy to Ukraine Kurt Volker and Tim Morrison, a former a top Russia and Europe adviser on the National Security Council, appear together in the afternoon.

Vindman and Williams were both on the July 25 phone call between Trump and Ukrainian President Volodymyr Zelensky, and Vindman reported his concerns to an NSC lawyer. In the wake of their testimony, both have also been attacked by the President as “never Trumpers.”

Vindman in particular has faced numerous attacks from Trump’s allies, and Vindman’s judgment was also questioned by Morrison in his testimony. Wisconsin GOP Sen. Ron Johnson — who has been in the middle of several key Ukraine episodes — sent Republicans a lengthy letter Monday about Ukraine that included an attack on Vindman, suggesting he was part of the Executive Branch that resents Trump and reacts “by leaking to the press and participating in the ongoing effort to sabotage his policies and, if possible, remove him from office.”

Vindman is prepared to answer questions about his judgment, according to a source close to Vindman. Vindman has printed out years of positive internal reviews and will have them on hand should he be questioned. His identical twin brother, Army Lt. Col. Yevgeny Vindman, a National Security Council lawyer who handles ethics issues, is expected to attend his testimony, a person familiar with the matter said.

Vindman’s testimony also has the potential to lead to a clash between Democrats and Republicans on the Intelligence Committee. During Vindman’s closed-door deposition, House Intelligence Chairman Adam Schiff objected to a line of GOP questioning about who Vindman had spoken with that he described as a “bad-faith effort to out a whistleblower who has a statutory night to remain anonymous.”

Republicans pushed back, arguing weren’t trying tou out the whistleblower and have the right to ask out who Vindman spoke to about the Ukraine matter and the call. “We can ask the questions we want to ask,” said Rep. Jim Jordan, an Ohio Republican.

Jordan wouldn’t say Monday whether Republicans would try a similar line of questioning.

Jordan added: “Whether that comes up tomorrow or not – we are still talking about the sequencing of questions and what those questions will be.”

Williams, a State Department employee on loan to the vice president’s office as a foreign policy adviser, has faced less scrutiny than Vindman, but Trump lashed out at her on Twitter after her transcript was released showing she had concerns about the July 25 call.

“Tell Jennifer Williams, whoever that is, to read BOTH transcripts of the presidential calls, & see the just released ststement (sic) from Ukraine. Then she should meet with the other Never Trumpers, who I don’t know & mostly never even heard of, & work out a better presidential attack!” Trump said.

In the afternoon, Morrison and Volker are two witnesses that Republicans asked Democrats to bring in for public hearings, and GOP lawmakers are hopeful they will poke holes in the Democratic case. Volker, who worked with the President’s personal attorney Rudy Giuliani to help the Ukrainians draft a statement on investigations, testified that he did not know about a quid pro quo connecting US security aid to investigations into the President’s political opponents.

Morrison testified that he had concerns the July 25 call would leak, but he did not see anything wrong or illegal in the content of the call. But Morrison also corroborated Taylor’s testimony, saying that Sondland had said the President told him Zelensky “must announce the opening of the investigations.”