‘People have said they are not coming back’: Tribune reporter reflects on time in Mexico covering brutal killings of 9 Americans 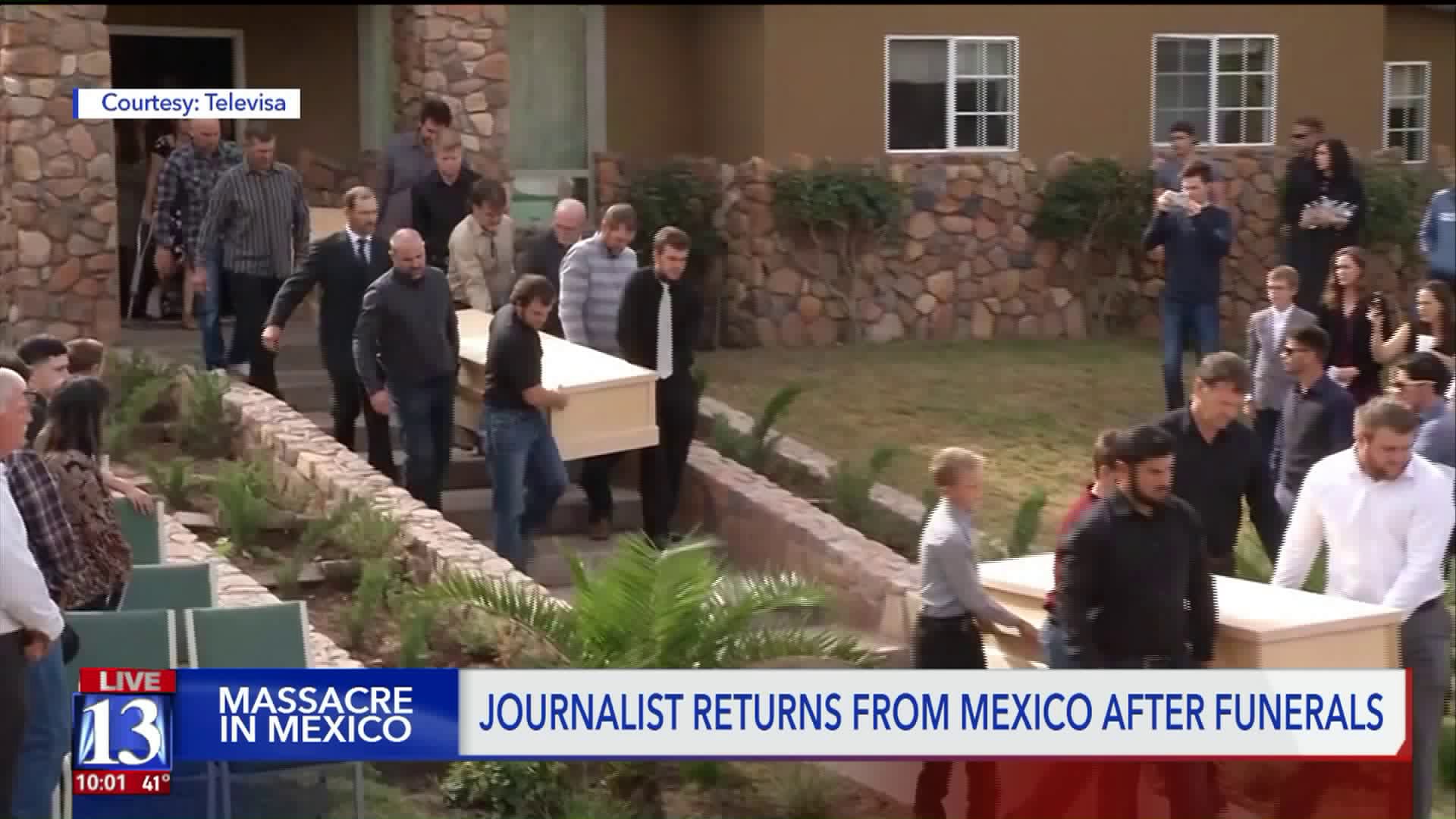 FOX 13`s media partners at The Salt Lake Tribune sent reporter Nate Carlisle and photojournalist Trent Nelson to the community of La Mora, Mexico to attend the funerals of the Langfords and services for the Millers all killed in the brutal attack. 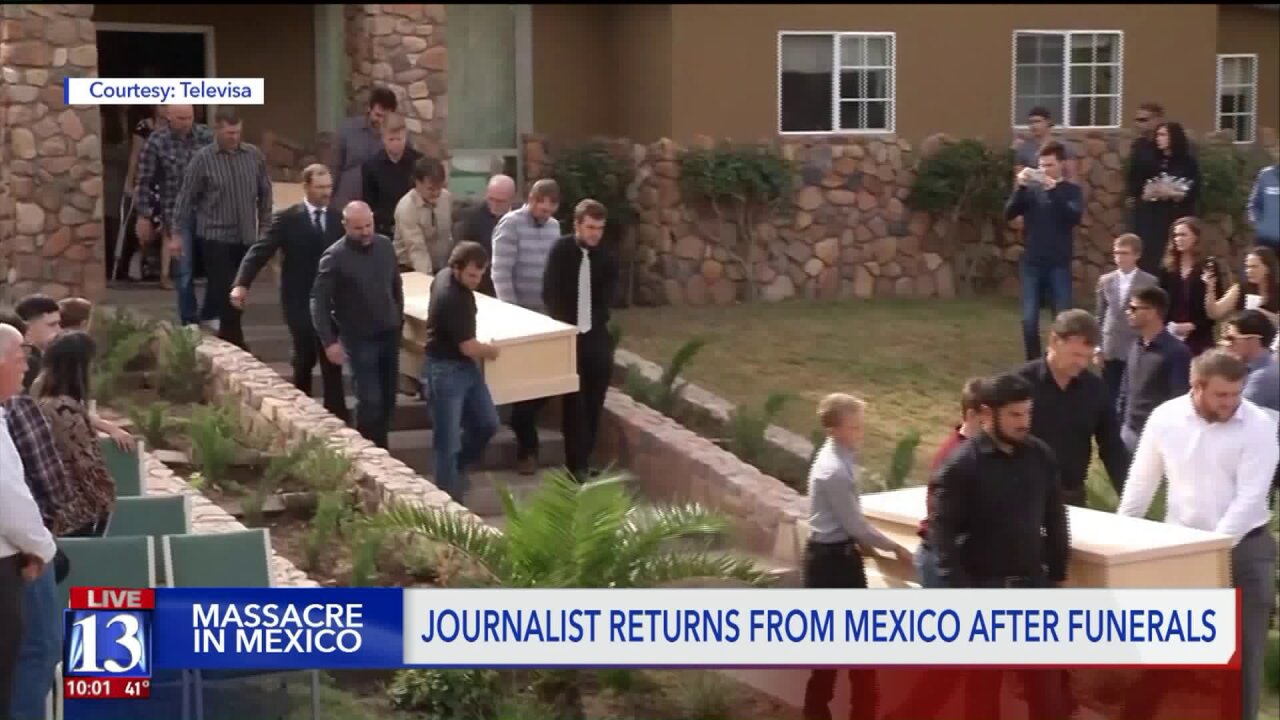 SALT LAKE CITY — In the middle of mourning loved ones, many were faced with the difficult decision on whether it was safe to watch the deceased be laid to rest. In order to say their final goodbyes, those in the U.S. had to cross the border to attend the funerals of the nine American women and children who were ambushed and brutally murdered in Mexico.

Safety concerns kept many people from attending the funerals and services in Mexico, including journalists.

FOX 13's content partners at The Salt Lake Tribune sent reporter Nate Carlisle and photojournalist Trent Nelson to the community of La Mora, Mexico to attend the funerals of the Langfords and services for the Millers killed in the brutal attack.

It wasn’t even clear when the duo arrived in Arizona if they would be making their way into Mexico.

“Trent Nelson and I were not going to go unless we had some assurances about safety. We’d been told that this caravan was going under the escort of the Mexican Military, which sounded as safe as we were going to get,” Carlisle said.

That same uncertainty filled others as they made the decision near Douglas, Arizona, Carlisle said. You can read his encounters with people making the decision whether or not to cross the border here.

“When we got to the rallying point, we asked the other families, ‘Do you feel safe?’ and the answer was kind of, ‘Well, we feel as safe as we can be given the circumstances.’ The Mexico military provided some assurances, and that was good enough,” he said.

There was room in the back seat of the pickup truck, so Carlisle and Nelson packed their things inside and headed off on the 5-hour drive to La Mora. At this point, they still had no idea where they would sleep, Carlisle said.

“At one point it was suggested, seriously, that we sleep along the riverbank. Instead, it turns out they had been stashing reporters in this house behind the orchards,” he said.

The uneasy feeling didn’t leave for some people, Carlisle said.

“Even when we were in La Mora, people were talking about how they do not feel safe here and they haven’t for a while. And a lot of people have said they are not coming back,” he said.

Carlisle spent days getting to know loved ones of the deceased and others in the community.

“The vibe was one that I would call a mix of sorrow for the deceased, of the way of life that is going to disappear there now. There was a bit of a family reunion aspect to it because people saw a lot of family, they haven’t seen in a long time. But it was also clear to a lot of folks: La Mora is over for all intents and purposes,” Carlisle said.

There was a lot of talk about the attack, Carlisle said. Theories swirled around and people searched for answers amid tragedy.

“Nobody has any definite answers about why this was done. There were certainly a lot of theories, but nobody seemed to have any expectation that anybody would be caught for this. There was talk about how they would probably have to wait for the next life for justice to be done,” Carlisle said.

Throughout his time in Mexico, Carlisle shared updates. He said this in a video update he shared with FOX 13 News:

“Another highlight was at the end when David Langford, husband and father of the deceased, spoke. He updated everyone on the condition of the surviving children, he called on the Mexican Government to address the violence or at least give the citizens the opportunity to possess firearms like they do in the United States, and he also expressed his sorrow. He gave a prayer at the end, asked God for help and said he cannot take care of his family on his own at this point,” he said.

In his interview with FOX 13, Carlisle again talked about David Langford.

“David Langford was the most sorrowful person I have ever heard. Not just at the loss of his wife and two children but about how his way of life was over in Mexico,” he said.

Many people lingered before they headed back to the United States, assuming they would never again visit La Mora, Carlisle said. Those who live the town have similar feelings, he said. You can read more about what people told Carlisle about leaving Mexico here.