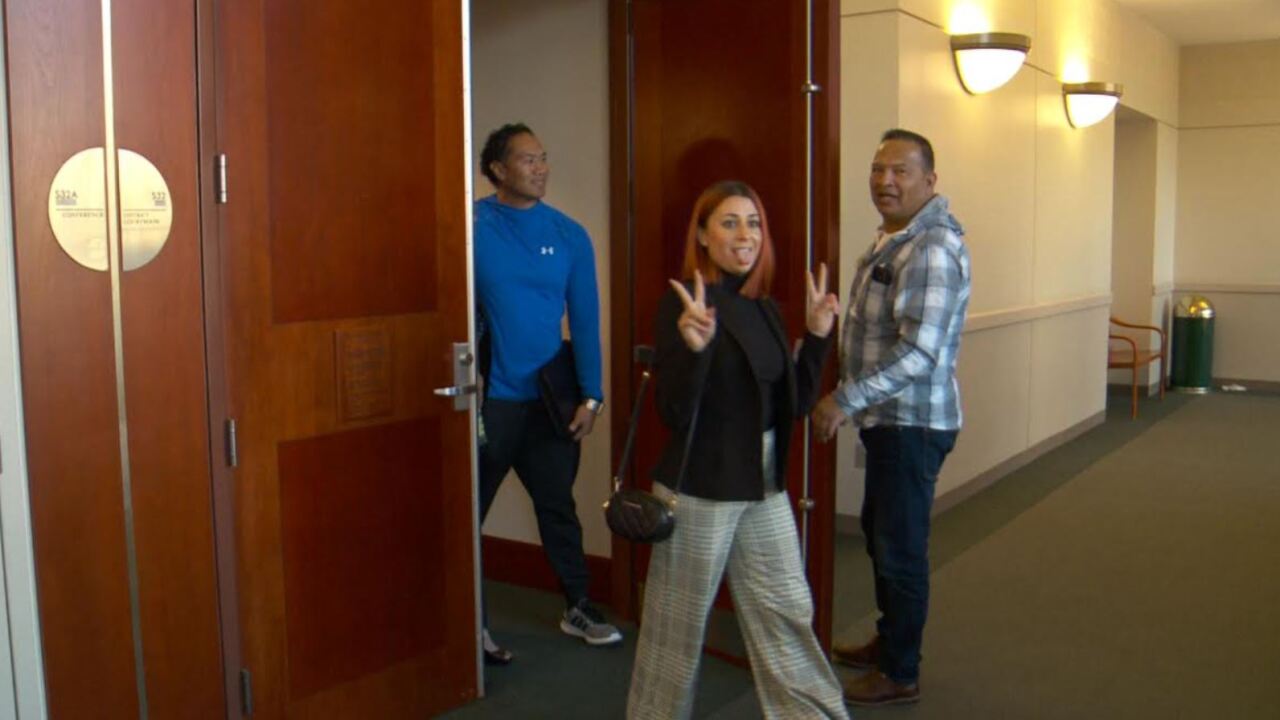 Excited employees of Button Down leave court after a judge allowed the SLC bar to reopen. (Image by Manuel Rodriguez, FOX 13 News)

SALT LAKE CITY — A judge is allowing a bar to open and sell liquor under a court order after she granted a temporary restraining order against Utah’s Department of Alcoholic Beverage Control Commission.

Third District Court Judge Laura Scott’s decision is treading into new legal territory. The bar license the DABC Commission forfeited against Button Down and John Vecchi has already been given away to another business and there are no more available until next year.

So she’s letting the bar open under her order.

“I don’t like to be on new ground,” Judge Scott replied.

Button Down and its owner, T & J Jazz Holdings, took the DABC to court after the commission forfeited its license at its October meeting. The agency alleged the bar didn’t properly disclose who had a stake in its ownership. Button Down’s attorneys argued the law said unless that exceeded a 20% ownership stake, it didn’t matter. Commissioners took the license anyway and, later in the meeting, gave it to another business.

In court on Friday, Judge Scott said she did believe Button Down did break the DABC’s rules by not disclosing any change in ownership. But what remains to be seen is if the bar broke Utah law when it comes to who has a stake in ownership. The DABC said Button Down is involved in a separate legal dispute over ownership that is still playing out in court.

Ruthanne Oakey-Frost, the DABC’s compliance and licensing director, told the judge the agency needs to know ownership stakes to ensure compliance with federal liquor laws as well as state laws. Some of the governing statutes date back to Prohibition. The Utah Attorney General’s Office also argued there were other issues the DABC found which justified taking forfeiting the license.

Judge Scott questioned why the DABC would give that license away before entering a formal order against the bar.

“It seems strange to me before an order is issued, the license is given to someone else,” she said.

David Pace, the attorney for T & J Jazz Holdings, argued that people would lose their jobs and the business could go under without a liquor license. They haven’t been able to serve alcohol since Oct. 29.

“There is immediate and irreparable harm,” he told the judge.

Judge Scott’s order allows the bar to remain open until Nov. 22, when she has scheduled more arguments. The DABC is expected to seek a dismissal of the entire case.

Outside court, bar employees cheered the news and quickly made plans to re-open and serve liquor on Friday night. DABC director Sal Petilos declined to comment citing the pending litigation.

“By having this in place, we’ve got a business still in operation, we have the state following the law and we’re allowing it play out and the law properly applied to the facts,” Pace told FOX 13.