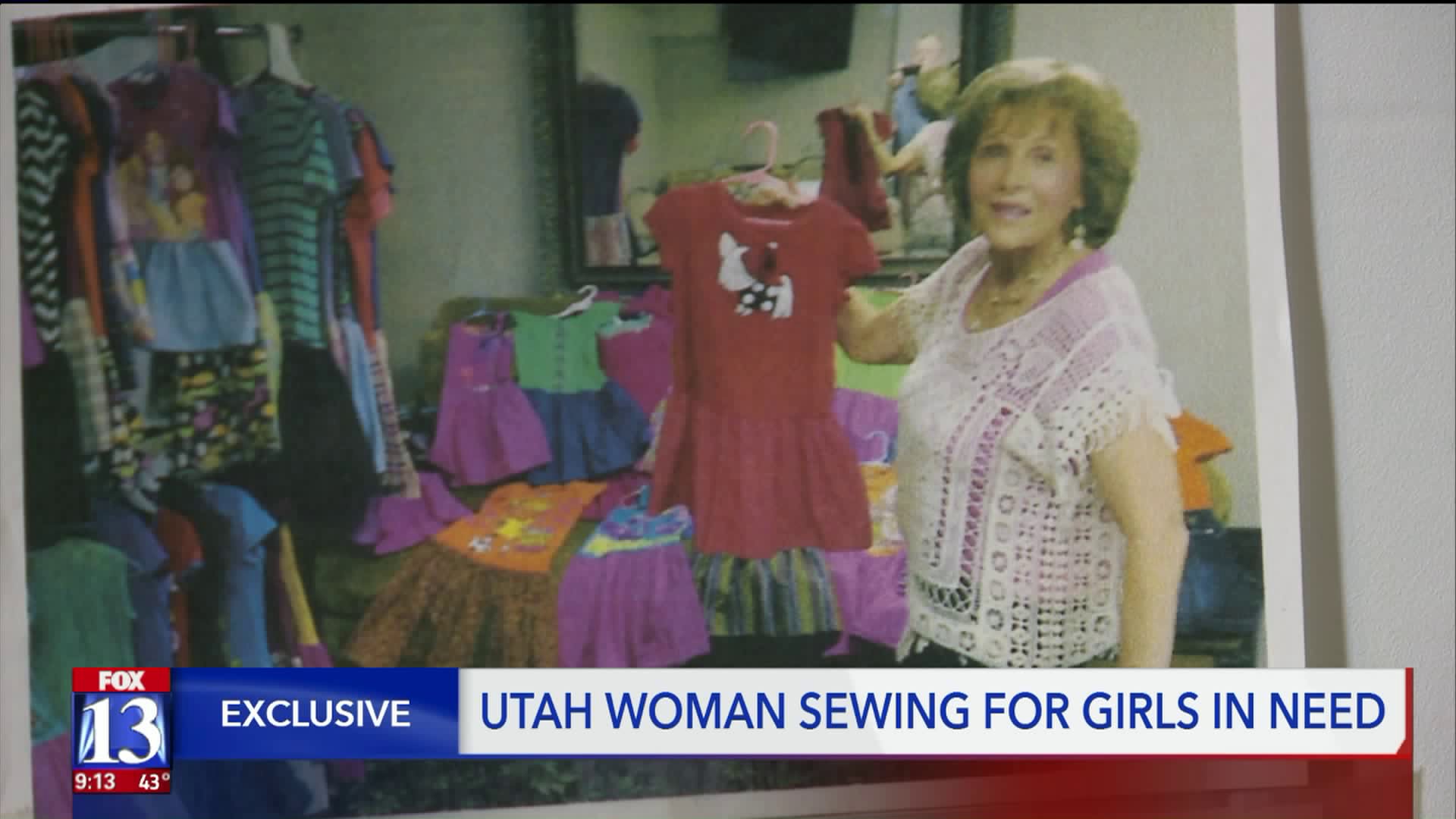 A Utah woman`s passion project has spanned the globe, bringing thousands of little girls in third world countries something they can call their very own for the first time. 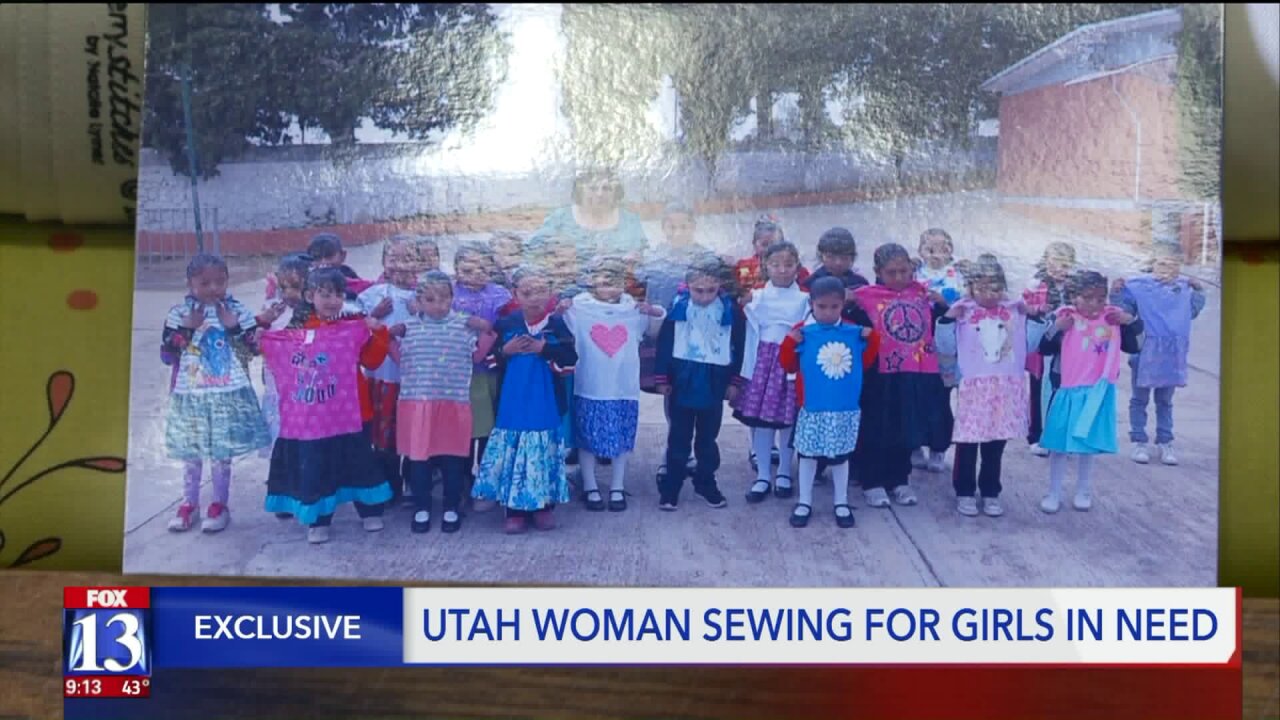 VINEYARD, Utah – A Utah woman’s passion project has spanned the globe, bringing thousands of little girls in third world countries something they can call their very own for the first time.

They look like something you would buy in the little girls’ clothing aisle. Brightly colored dresses in an array of colors and patterns – adorned with Disney characters, unicorns and lace.

It’s everything a little girl could want, but it doesn’t come from your local department store – these ones are even more special.

“I spend a long time trying to get them just right,” said Arda Molen as she sat next to her sewing machine in the front room of her Vineyard, Utah home. “I’m an artist, so I kind of have an eye for what goes together.”

Looking around the small space — no bigger than 12x12 — you’ll see spools of thread neatly organized and tucked away, boxes of scrap pieces and bolts of colorful fabric filling a wall-length bookshelf – now covered in small dresses hanging from the shelves.

As a sign on the far wall would suggest, “In here, she works with her hands in delight.”

Arda learned how to sew when she was 12 years old and has always been a seamstress. However, four years ago a car accident left Arda with limited mobility -- she has spent countless hours in this space ever since.

“I’m not going to sit around and feel sorry for myself; I’m going to do something worthwhile,” she said.

So, she started creating the dresses.

“I buy all of these t-shirts and then I buy the material that matches them and add the skirts to the t-shirts,” she explained. “I’ve been through probably three or four irons and three [sewing] machines.”

But the joy she gets isn’t from the dresses she makes.

“That’s some of the little girls that get them,” she said as she flipped through a large scrapbook filled with pictures of her dress creations alongside snapshots of groups of little girls holding them.

Her joy comes from the impact they create.

“They’ve gone all over the world,” she said as she flipped the page of her scrapbook. “South American, they go to Mexico, they go to Columbia, they go all over.”

Over the years Arda has worked with multiple Utah organizations that help facilitate the delivery of her dresses to girls in third-world countries.

“Arda is just a real Godsend to the children in Africa,” said Dr. Richard Nielsen, President of World of Difference, a non-profit organization that builds schools and visits orphanages in Africa.

Of Arda’s 5,000 dresses, World of Difference has delivered a thousand to girls in Malawi, Africa.

“Way beyond a donation, it’s a life-changing experience for those girls,” Nielsen said.

The girls are all orphans, many of whom were victims of sex trafficking.

“The clothes that they have been wearing are probably the same clothes they’ve been wearing for the last couple of months, maybe the last couple of years,” Nielsen continued. “When they have this brand-new dress that has Disney characters or other things… I can’t even tell you the expression on their face, they just hold it like it’s the best thing they’ve ever had in their entire life.”

Of course, as the old saying goes, no good deed goes unpunished -- this labor of love has taken its toll on Arda’s body.

“That’s all I did, I sewed six to eight hours a day, I sewed until it ruined my hand,” Arda said as she pointed to a brace on her right hand and forearm. “I’ve got shredded tendons; I’ve got ligaments that had to be cut away.”

A few weeks ago Arda had her first surgery to try and repair the damage to her hand, but she still has one to go. Each one, carrying a doctor-recommended 4-month recovery time.

“I was [sewing] the day after my surgery,” Arda chuckled. “They [her family] threatened to take my sewing machine away if I kept doing it.”

But even after dedicating four years, thousands of hours and her health to the project, she refuses to stop.

“I just want to send them so badly, I don’t want to stop,” Arda exclaimed.

“See how I can guide it with my hand, even though it’s in a brace?” she said as she pushed fabric through her machine.

Arda said since her surgery she has had to get creative, asking family and friends to do the portions she no longer can.

“I don’t want to quit, it’s just not in me, especially when I look at the pictures of the girls,” said Arda. “When I see them and they’re so happy then I think, 'I don’t have any problems, their problems are a lot worse than mine'… so I just continue to sew.”

Despite the sacrifice, it’s worth it.

“When they can get something that they feel really pretty in, they’re so happy, they’ve never had anything like that before,” Arda said as she gazed at some of her finished dresses. “That’s why I keep sewing, even though it hurts.”

Arda still has one surgery left to go, and she hopes to be back up to full speed in four months.

If you are wondering where she gets the money to buy supplies, she does it all out of pocket -- except for one generous person who donated $500 to her a few years back.

She said she looks for sales on t-shirts, bolts of fabric and trim, so her money can spread further – she would do anything to make sure little girls can keep getting her dresses.