From drug use to time spent staring at a phone, Utah’s Department of Human Services has published a big new survey on our children 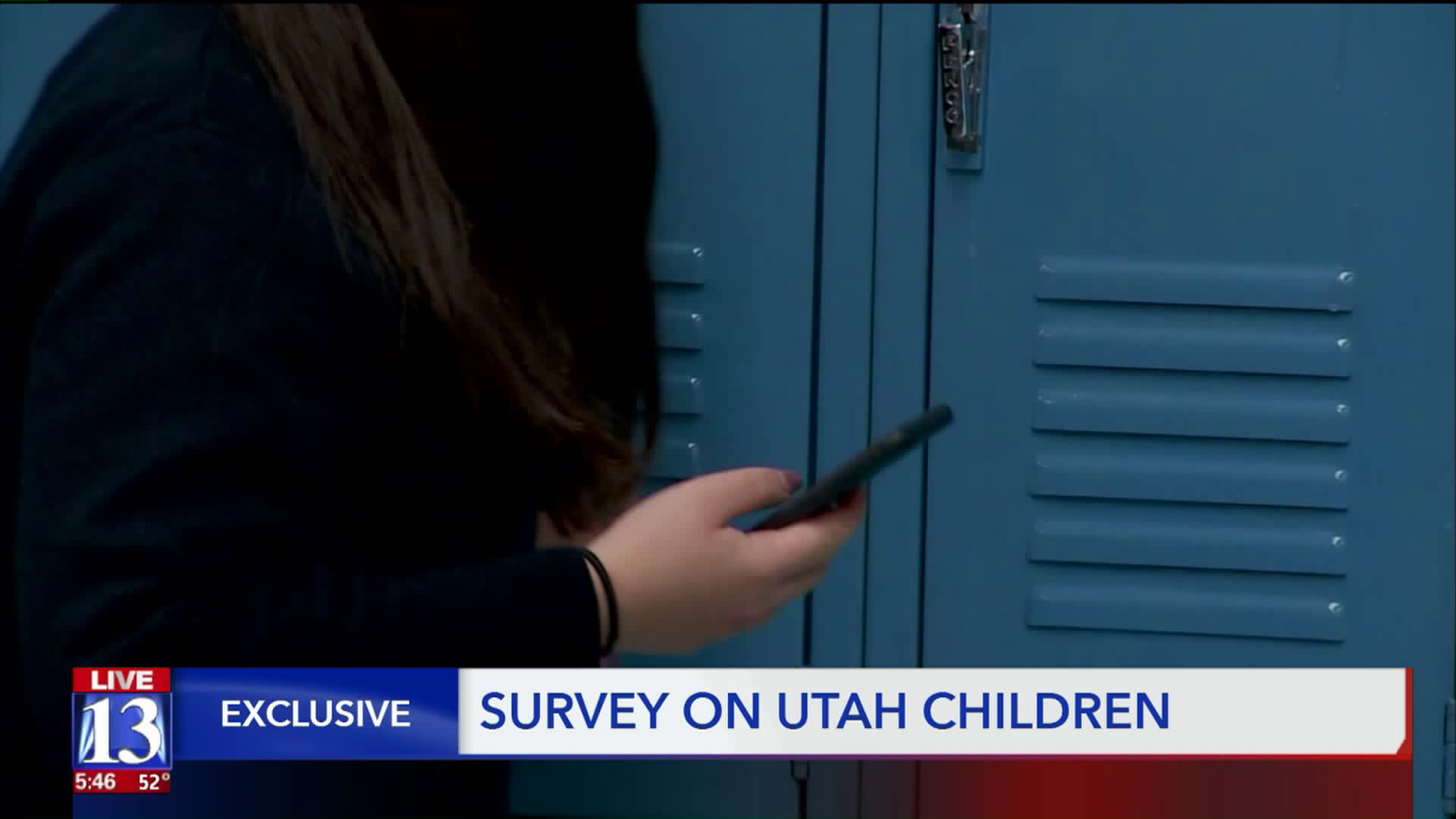 A major new survey is offering some insight into the minds of Utah`s children. 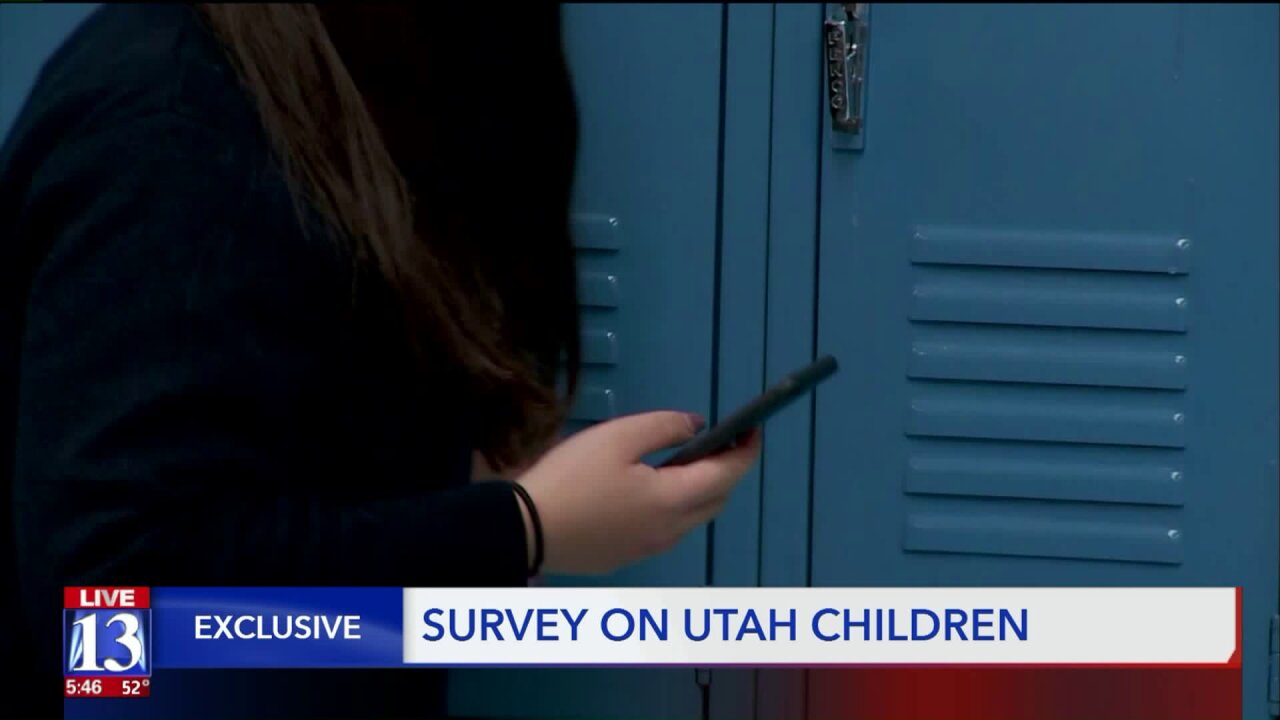 SALT LAKE CITY -- A major new survey is offering some insight into the minds of Utah's children.

The 2019 Student Health and Risk Prevention (SHARP) Survey gauges the views of about 90,000 Utah children in sixth, eighth, 10th and 12th grades (parents give permission for children to participate). They were asked everything from substance use to suicide ideation and how much time they spent on their phones.

The survey is completely anonymous and is conducted every other year. This year, 39 of Utah's 41 school districts participated. So did 17 charter schools and a private school. The data can inform policy in both classrooms and Capitol Hill.

The results offer a glimpse into the minds and world of Utah's children. For example:

Since 2003, alcohol use among all grade levels surveyed has declined from 11.8% of Utah children reporting using it in the past 30 days, to 5.5% today. Utah is still lower than other states that conduct similar surveys and alcohol use amongst children is declining overall. Prescription drugs and other narcotic abuse is also declining, as is traditional cigarettes.

Marijuana use in the past 30 days has increased slightly, but it's not a tremendous increase, said Mary Johnstun, Director of Surveys for Bach Harrison LLC, which administered the SHARP survey. Eighth graders saw the biggest increase, while it went down slightly for 10th and 12th graders.

The perceived risk of cannabis is also going down, Burt said, perhaps tied to the increased legalization of it in Utah (medical marijuana) and other states (medical and recreational marijuana). It's something that will be monitored in the 2021 survey.

Vaping has increased dramatically since the question began being asked in 2011, Johnstun said. Some grade levels like 10th and 12th have seen it start to level out, but 8th graders have seen an increase since 2017. All grade levels have recorded an increase in use of vape juices with nicotine.

"Student perceptions of the harmfulness of vaping is starting to increase, which is good," Johnstun told FOX 13.

This year, the survey noted a jump in sixth graders reporting suicide ideation, planning and attempts.

"Not something we want to see," said Johnstun.

Breaking it down by race, Hispanic and Pacific Islander youth report the highest levels of suicide ideation and attempts. This year is the first time the survey has asked youth their sexual orientation or gender identity. Of those who reported, 60% of those who identified as transgender reported seriously considering suicide in the past year.

"Heterosexual students are least likely to be considering suicide or depressed in the past few weeks," Johnstun said.

A positive sign is the SHARP Survey recorded an increase in kids at all grade levels reaching out to talk about feeling sad, hopeless or suicidal with either an adult or a friend.

"We have seen a decrease in alcohol use. That’s huge. When I see that we have more students talking to an adult? That’s fantastic," Burt said. "That shows whether it’s prevention or breaking the stigma, we are changing that conversation around mental health, around substance use, they’re reaching out to an adult and even a friend."

This category is very similar to trends in suicide and suicide ideation. Johnstun noted that as social isolation increased, so did suicide ideation. Bullying has declined somewhat, the SHARP Survey found, but the number of overall students who have felt so unsafe they have skipped school has increased from 7% in 2015 to almost 11% in 2019.

Asked about access to guns, Johnstun said 62% of youth who were asked how easy it would be for them to obtain a handgun reported it would be "very hard." 17% said it would be "sort of hard," 11% reported "sort of easy" and 9% said "very easy."

Among those who had disclosed they previously made a plan to die by suicide, 39% said they did not have access to guns/bullets and 26% said they would not know how to access it. 24% reported having the ability to access a gun or bullets.

In some stunning numbers, just over half of sixth graders surveyed reported spending a minimum of two or more hours a day on an electronic device for non-school use.

"66.8% of our eighth graders and in terms of our 10th and 12th graders, it’s nearly three in four are spending two more hours on their devices," Johnstun said.

The trend shows the majority are using social media. In a new question, 30% of those who indicated they spent five or more hours a day on their screens had also indicated they had considered suicide in the past year.

This year, the SHARP Survey asked students about their fears in the school environment. Collectively, the data found students had more of a fear of an earthquake or a fire than they did being bullied. A fellow student dying by suicide was the biggest concern on student environment, as well as other students using alcohol and drugs.

Parking lots and bathrooms are also the places the students surveyed reported feeling the least safe.

The SHARP survey can be viewed in its entirety here. For more community-based breakdown (by region), Burt said people can contact their school district for information.

Burt said state officials take the data and look at where policy needs to be focused.