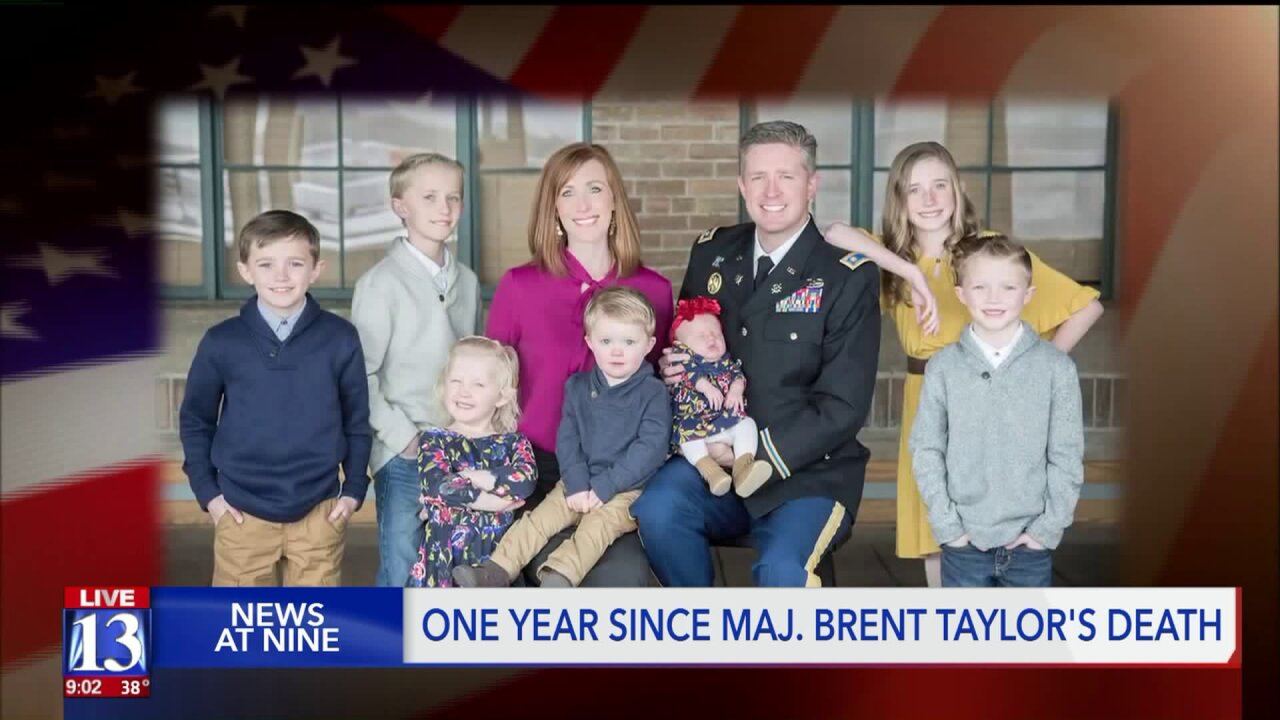 NORTH OGDEN, Utah — One year after the death of Maj. Brent Taylor, a Utah community is taking the tragedy and turning it into triumph, celebrating each person in their community who has served, continues to serve, and has given the ultimate sacrifice.

“This is you,” one woman said to her husband as he walked towards a flag.

“Yeah, that is me,” he said as he grabbed a small piece of paper attached to the flag pole with his name on it.

“I’m so proud of you,” the woman said emotionally as she embraced him.

That man’s flag is one of 320 American flags that now stand outside of North Ogden City Hall. It’s called the Field of Honor, a show of respect and recognition for those in the community who have served, continue to serve, or have given their lives fighting for freedom.

His name marks one of the flags, alongside five of his brothers — including the late Maj. Brent Taylor, who also served as the North Ogden Mayor.

“This one is Brent’s,” Matthew said as he grabbed the tag.

“It’s really hard to think it’s been a year, 365 days of waking up every day, trying to take it one day at a time,” said Jennie Taylor, Brent’s widow.

Brent was killed November 3, 2018 while serving in Afghanistan. Brent’s unit was stationed near Kabul to train the Afghan National Security Forces when a member opened fire at the base, killing Brent and injuring one other. Other Afghan forces returned fire, killing the gunman.

“With everything in my soul, I miss my husband," Jennie said. "I say half of me has died, and it’s not the left half or the right half, it’s half of every soul in my body."

“For some reason, you look at that day on the calendar and it just feels so heavy,” Jennie said. “We thought, 'You know what? We want to turn it into something beautiful'… I think that’s been the theme of the whole last year, just beauty from ashes.”

Instead of continuing to mourn, Jennie, Follow the Flag and the city of North Ogden partnered together to create a day for the entire community to remember and honor everyone who has served.

“It’s not just those that die for us that are the heroes, but those who are willing to die for us every day, every man or woman who puts on a uniform for this country, might die for me today, and that’s huge,” Jennie said.

Hundreds of community members filled the hillside at the local amphitheater to celebrate.

Color Guard started off the event with a flag presentation before a local high school choir sang the National Anthem. A community orchestra played the song for each military branch, as community members who have served stood once their song started to play — all the while, those who have lost family members presented the flag for each branch.

Mayor Brent Chugg spoke, and so did Jennie Taylor, with a smile on her face.

The Taylor family was happy to see the community come together to remember, honor and support those who have given something — or everything — for the red, white and blue.

The field of honor will be on the front lawn of North Ogden City Hall throughout the week. Organizers also encouraged everyone to swap out their front porch light with a green lightbulb, to show support for veterans throughout the month of November.