Utes score 21 unanswered points for the comeback win against Washington 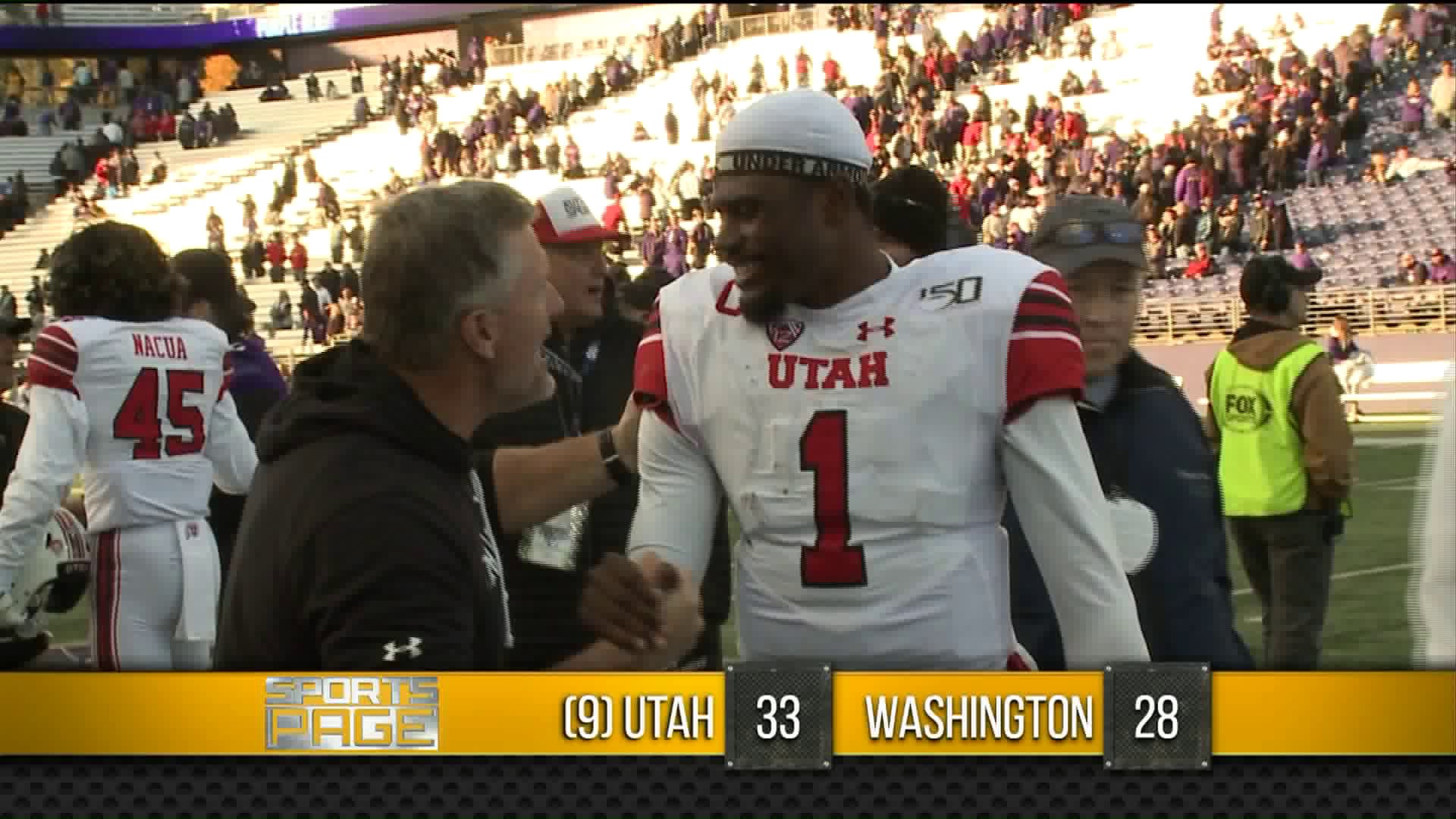 Utah rallied in the second half to make a major comeback against a fierce PAC12 rival. 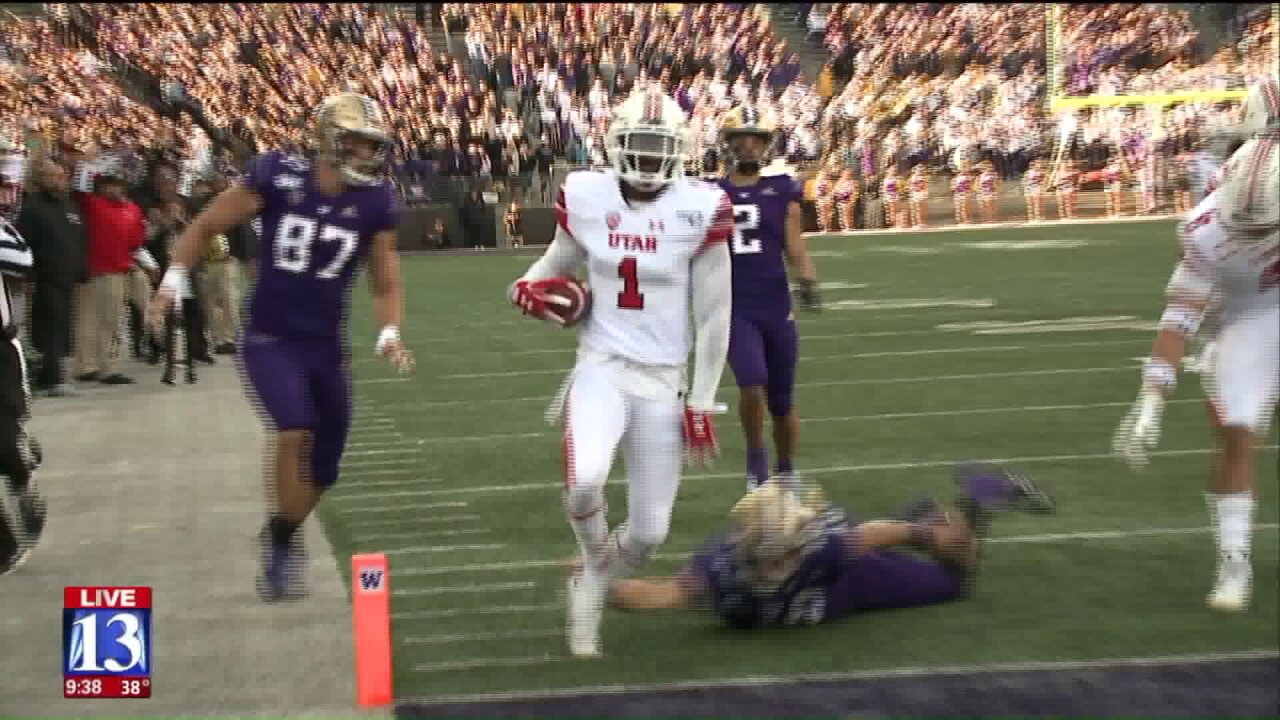 SEATTLE, Wash. – The University of Utah football team scored 21 unanswered points after trailing the Washington Huskies through three quarters, coming away with a 33-28 win at Husky Stadium. The Utes improved to 8-1 overall and 5-1 in Pac-12 play.

After a slow start on both sides of the ball, the Utes got going in the second half to finish the game with 399 yards on offense that included 284 passing and 115 rushing. Despite Washington accumulating 369 yards of total offense, the Utes held them to just 53 yards rushing, including minus seven in the fourth quarter.

Tyler Huntley finished the game 19-of-24 passing (79%) with one touchdown, adding a one-yard rushing score. Zack Moss led the Utes in the ground game with an even 100 yards rushing on 27 attempts and a touchdown while Jaylen Dixon had a team-high 72 yards receiving on just two catches.

Moss also had five catches for 41 yards and a receiving touchdown, giving him 36 career total touchdowns scored. It set a new school record, passing Eddie Johnson who had 35 from 1984-88.

Terrell Burgess finished the win with a game-high and career-high 10 tackles that included a tackle for loss. Julian Blackmon added eight tackles and an interception while John Penisini recorded seven stops, a sack and a forced fumble.

The Utah defense set up the Utes' first points of the game when Penisini forced a fumble on the Washington 15-yard line with Mika Tafua coming up with the recovery. The Utes were unable to find the end zone, turning to Jadon Redding to knock in a 31-yard field goal to cut the Washington lead to 7-3 with 14:56 remaining in the second quarter.

The Huskies took an 11-point advantage on the next drive, scoring on a 34-yard passing touchdown with 12:19 on the clock to make the score 14-3. It was a 75-yard scoring drive with just six plays, taking 2:37 off the clock.

The Utes' run game gained momentum late in the second quarter, putting together a 75-yard drive that was comprised of 56 rushing yards to cut the Washington lead to 14-10 with 2:46 on the clock. Moss accounted for 64 of the 75 yards in the scoring drive, including the nine-yard touchdown catch to make it a four-point game.

After the Utah defense stopped the Huskies on fourth-and-one on the Utah 45, the Utes drove down field to the Washington 14-yard line, attempting a 32-yard field goal with four seconds remaining in the half. Redding converted the field goal for Utah's 13th point of the second quarter, making it 14-13 heading into halftime.

Blackmon came away with an interception on Washington's first drive of the third quarter, but the Utah offense couldn't get things going and were forced to punt. The Huskies were able to put another seven points on the board on the next drive with 8:15 left to play in the quarter, scoring on a 40-yard passing touchdown to give them a 21-13 lead.

Between both teams, there were four turnovers in the third quarter with Utah coming up with the final one, a pick-six by Jaylon Johnson to cut the Washington lead to 21-19 with 3:06 on the clock. Johnson picked off the Husky quarterback on the Washington 39-yard line, running it back to the end zone for Utah's fourth pick-six of the season.

Utah's offense took the momentum gained by the defense into the fourth quarter, scoring a one-yard rushing touchdown to officially take a 26-21 lead with 11:23 remaining in the game. Huntley scored his fourth rushing touchdown of the season at the end of the nine-play, 82-yard drive that took 5:18 off the clock.

Moss claimed his fourth school record with 4:52 left to play, scoring his 36th overall touchdown, setting the Utah record for total touchdowns scored, giving Utah a 33-21 lead. The scoring drive was set up by the Utah defense forcing another three-and-out on the Washington offense with the Utes going on to score the two-yard rushing touchdown at the end of the 11-play, 84-yard drive that took 5:22 off the clock.

Washington ended Utah's scoring run with 1:01 remaining in the game, putting in a three-yard passing touchdown to cut the Utes' lead to 33-28. After attempting an onside kick, Blackmon recovered the ball, giving it back to the Utah offense to run out the clock and post the 33-28 win in Seattle.

Utah will return to action on Saturday, Nov. 16 to take on UCLA after its open week. The game time and TV broadcast information has not been announced yet.