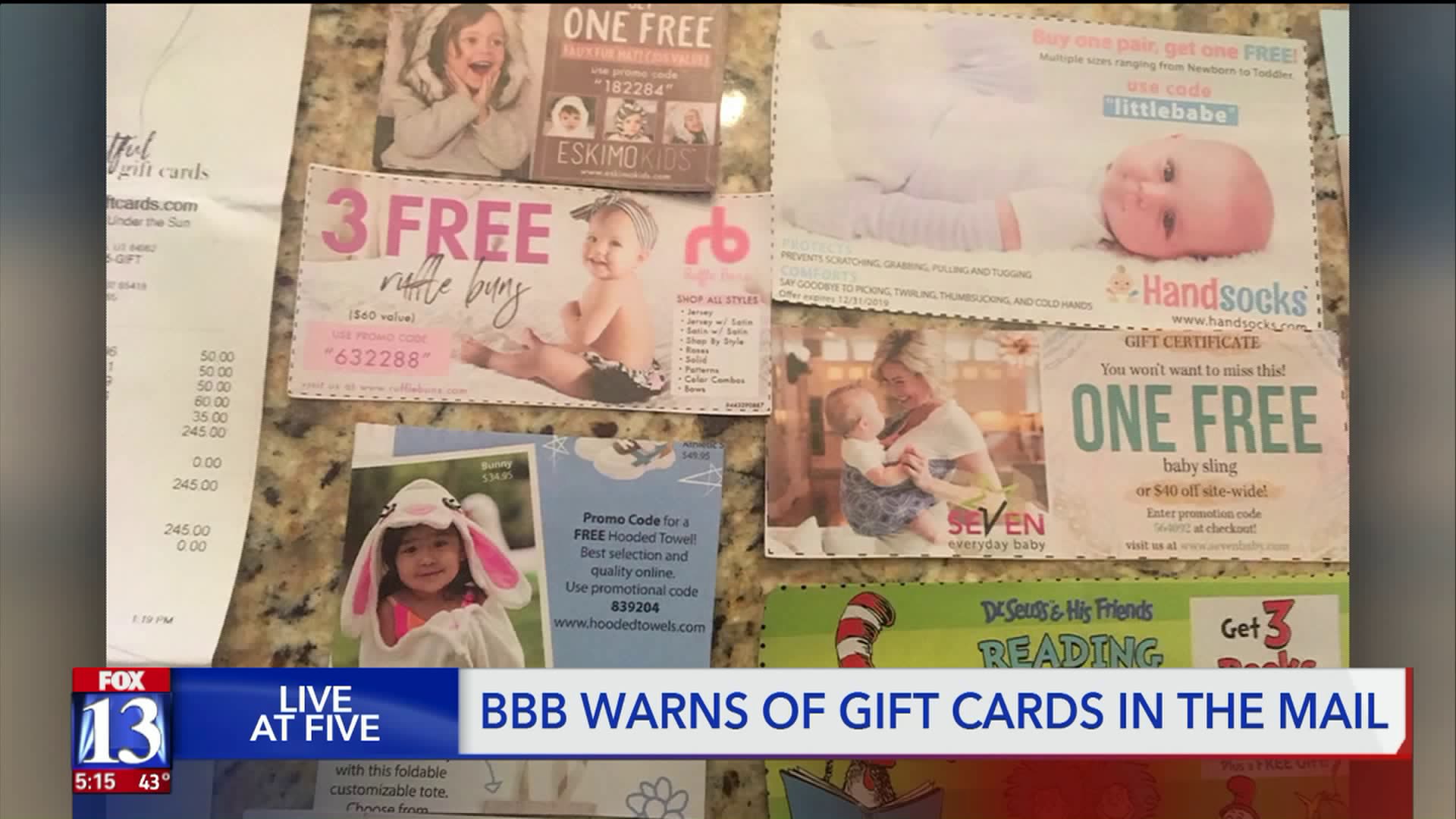 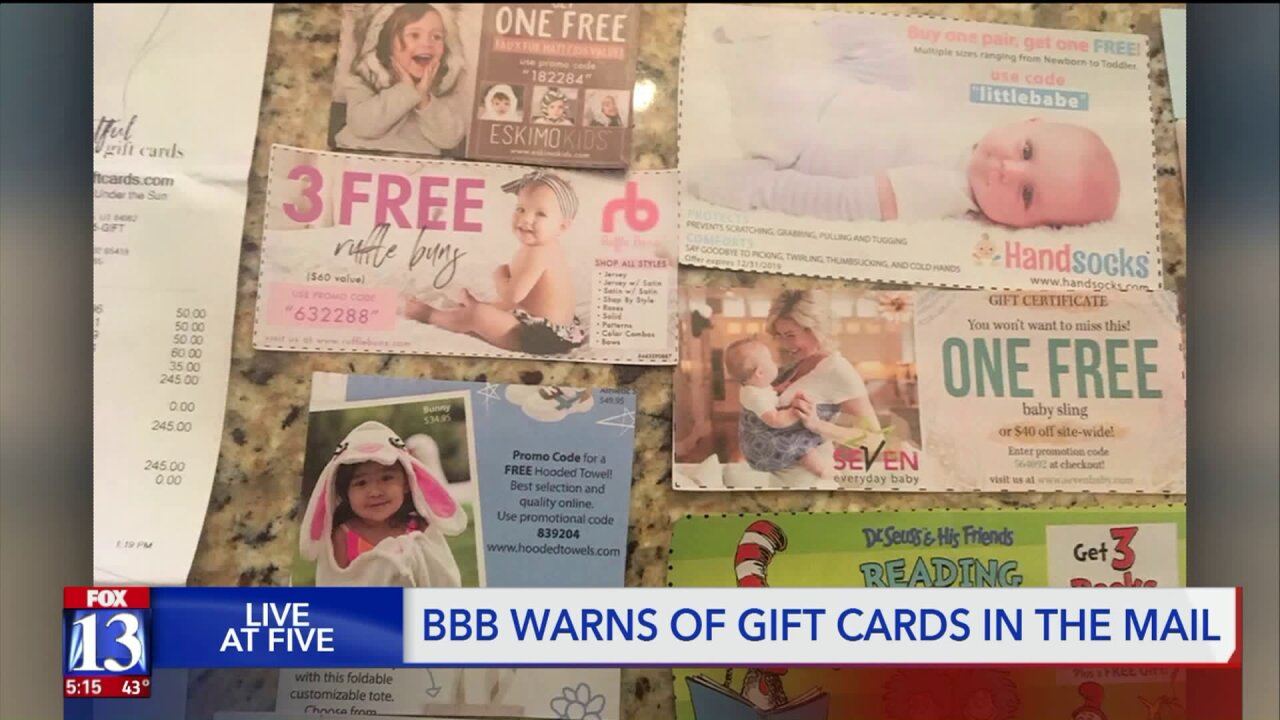 “I just received this in the mail from someone, Jenny B, Jenny Bosco,” said Ashlyn Riggs in a Facebook Live video, as she brushed her hand across a greeting card and stack of gift cards.

It’s a marketing ploy that is sweeping the country.

“We’ve had almost 8-thousand people who have contacted us,” said Jane Rupp, President of the Better Business Bureau, serving Northern Nevada and Utah.

Women across the country have received it. A pink envelope, which appears to be hand-written, with smudged ink around where a return label appears to have gone missing.

Open it up and you will find a purple greeting card that has an avocado with a little heart on its pit.

Inside, hundreds of dollars’ worth of gift cards, a receipt for their purchase (equating to $245) and a handwritten note from a stranger.

“Congratulations!!! I’m so excited for you! I hope you like these.” The message inside is then signed with a heart and the name, “Jenny Bosco.”

“The card is supposed to go to people who are pregnant, and they are giving them gift cards to use at the websites,” Rupp said.

But as the old saying goes, when something seems too good to be true… it probably is.

“We’re getting requests from across the country about this business,” said Rupp. “We get a complaint, or a scam tracker entry, or a customer review almost every day.”

The Better Business Bureau said, ‘Jenny Bosco’ is Jeanette Pierce, the owner of a Pleasant Grove company called Mothers Lounge, LLC – they have been in operation since 2005.

All the gift cards and coupons provided are for businesses owned by Pierce under the Mothers Lounge, LLC.

“There’s no way that they can actually be giving those discounts and stay in business,” Rupp said.

The BBB said Mothers Lounge, LLC has been on their radar since February when the ‘questionable’ gift cards were first sent to women across the country.

“There are a couple of things that are of concern to us, the first thing is, there is no return address on the envelope, we expect businesses to be transparent,” said Rupp.

The gift cards aren’t what you think either. They can’t be paired with any of the sites’ hefty promotional discounts, and when you use it to pay the shipping cost spikes.

“You have to wonder if they price these, because they’re different prices, at the exact price point so that the shipping does increase to cover the cost of the product,” Rupp said.

“We have heard from consumers that the quality isn’t exactly what people expected,” said Rupp.

In a statement to FOX 13 (below), Mothers Lounge, LLC called the practice ‘heartfelt’ and explained that the gift cards are being sent to new Utah mothers. However, the BBB said, of their 8-thousand reports, only a handful came from Utah residents.

Mothers Lounge, LLC continued saying, “The qualified recipients for this mailer have, at one point, subscribed to an opt-in list for maternity deals and coupons through a third-party marketing company.”

“We are a proud Utah company that has been in operation since 2005. Over 300,000 Utah families have ordered from our brands throughout the years.  Mothers Lounge has mailed a heartfelt note which includes gift cards with proof of activation, and coupons to new Utahn mothers. The qualified recipients for this mailer have, at one point, subscribed to an opt-in list for maternity deals and coupons through a third party marketing company. All information from third party companies is only used internally for Mothers Lounge and is not sold or used for anything else other than the direct marketing of Mothers Lounge. We are very grateful for all our customers! Thank you for your continued support!”

But based on a text FOX 13 reporter, Elle Thomas, received from her mother in her home state of Colorado Thursday morning, neither of those things is true.

“Am I going to be a grandma?” Elle’s mom texted and sent along with a picture of the purple avocado card.

Sorry, Carrie. Not the case.

“If it’s really a list where it’s supposed to go to people who are new mothers or are expecting, why are there so many people who are not expecting or had a baby [receiving cards]?” Rupp said.

Elle isn’t the only one to receive the mailer. Hundreds of posts on Facebook and Reddit show women across the country sharing pictures of their cards, expressing they are not, in fact, pregnant.

“This is by far the weirdest type of marketing. First of all, I don’t know a Jenny Bosco. Second, it’s creepy that there are actually hand-cut coupons in this and third, I’m not even pregnant or trying,” one woman posted alongside a slew of pictures of the items.

“I am sorry your package found me instead of the mother I believe you meant to send it to,” a man posted.

For some, the cards hit hard.

“I just got these and miscarried a month ago am not happy to have received them,” another woman commented.

“Unfortunately some of the cards are going to people that are not pregnant, [or] who have lost children, so some of it is very, very sad and awkward,” said Rupp.

After the BBB started receiving inquires, alerting them to this ‘questionable marketing tactic,’ they reached out to Mothers Lounge, LLC.

“We contacted the business and asked them to modify it, as we didn’t believe they were really gift cards, and we never received a response from the business,” said Rupp.

Rupp said less than 20-percent of companies ignore a request for modification.

Currently, the BBB has given Mothers lounge, LLC an ‘F’ rating. If the company does not make changes come the next calendar year, they will reach out to them again to request compliance.

However, it would be up to a government agency to take further action against the company.

If you receive one of the mailers, the BBB recommends throwing it away and ignoring it. If the tactic is no longer working for the company, they would be more likely to stop.