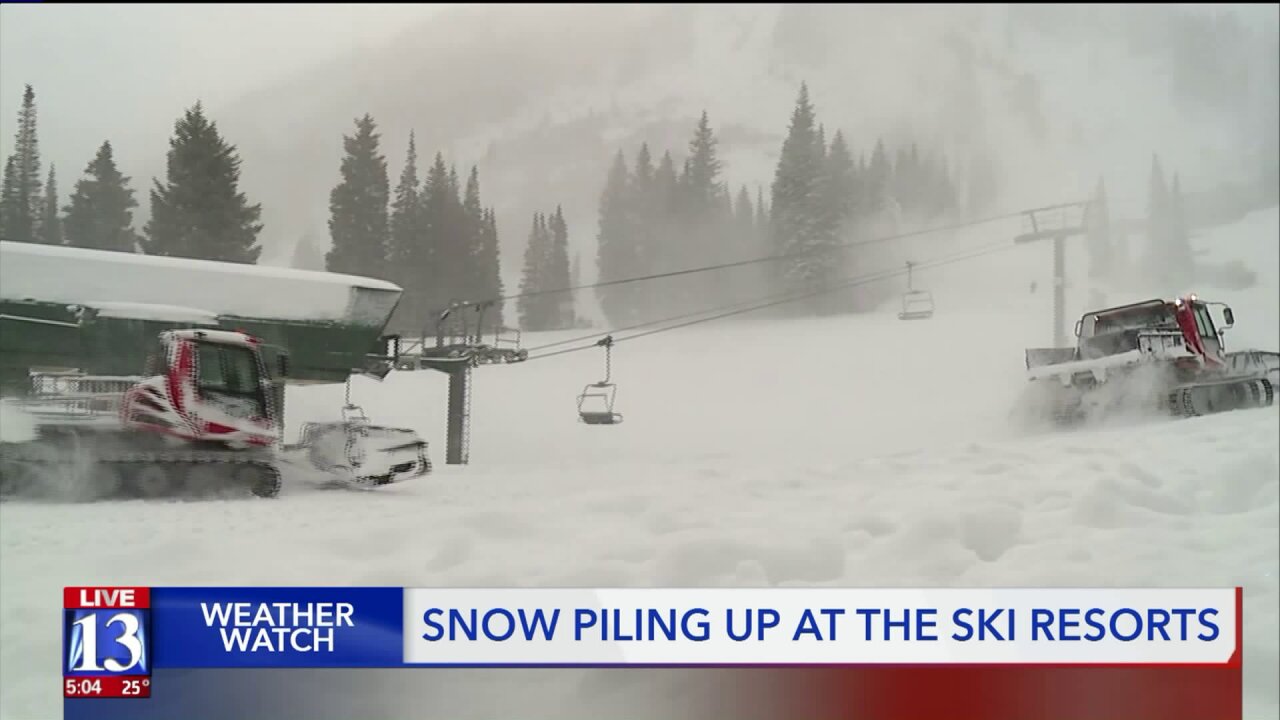 ALTA, Utah — The early season snowstorm dropped temperatures enough for some Utah ski areas to turn on their snowmaking machines early for winter.

They report the October cold snaps are already setting up ski resorts for a strong season.

At Alta on Tuesday, Snowcats, snowmobiles and snow machines made up the sound of the hard work it takes building a winter wonderland.

Snowmaking machines constantly hummed in the background as skiers and snowboarders, eager for early season turns, geared up at the base of the hill.

Those who had already hiked up glided down on the 27-inch base of powder. They enthusiastically hollered as they neared the end of their run.

The happy cries signaled the sound of snow in October -- not just a sound, but a feeling.

"Everyone is psyched," Alta Ski Area marketing director Brandon Ott said, right as a skier screamed "It's snowing!" behind him.

Ben Smith strapped his boots into his splitboard, saying he was "all juiced up" over the snow. He came up to Alta on Monday and returned on Tuesday. He plans to be back on Wednesday, the day before Halloween. It's the only time the snowboarder can experience the ski-only resort.

"Halloween and the snow? I'm a happy camper, I'll tell you that much," he said.

Typically, you wouldn't find this much snow at Alta right now. Ott said they didn't have as much snow this time last year, and they hadn't turned their snowmaking machines on yet.

"Normally it's more on the first week of November when we get the guns fired up," he said.

But Mother Nature's been kind to them this fall, with a few early season storms. And this week, Ott explained the temperatures dropped low enough for man-made flakes.

He described the snowmaking process. The machines create flurries that land in piles around the resort.

"And then our Snowcats come around, and push snow into places where we need that snow," he said.

Ott said crews will work in three shifts around the clock to prepare for opening day on November 23. Their snowmaking machines, he indicated, will also run around the clock.

They expect the early season cold weather to continue to help.

"Super excited," Ott said. "Here comes the winds and the snow picking up again, so this is good stuff."

That 'good stuff' is stacking up early, setting them up for a great season.

As Smith got ready to head up the hill, he and a skier exchanged what can only be described as powder hound calls to each other.

"There you go," Smith said, laughing.

If the snow keeps up, he said he'll try to come up every day. Smith described the snow as fluffy. He knows the snow machines are helping.

"It's nice to know they're getting started on it," he said, adding, "And that they'll be open soon."