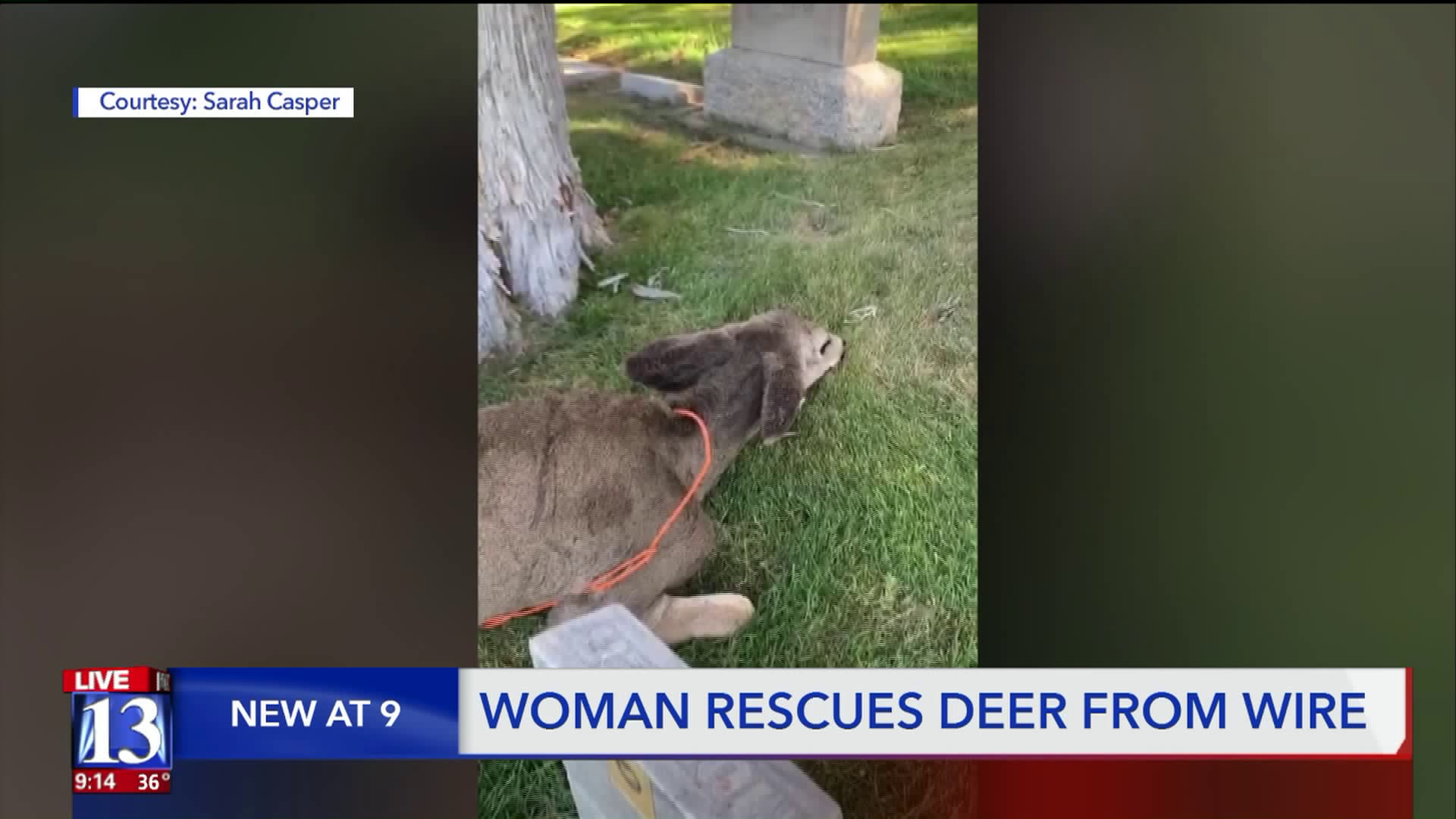 A Utah woman said it was an instance of "motherly instincts," but not for her own children for an injured deer that was trapped in a wire. 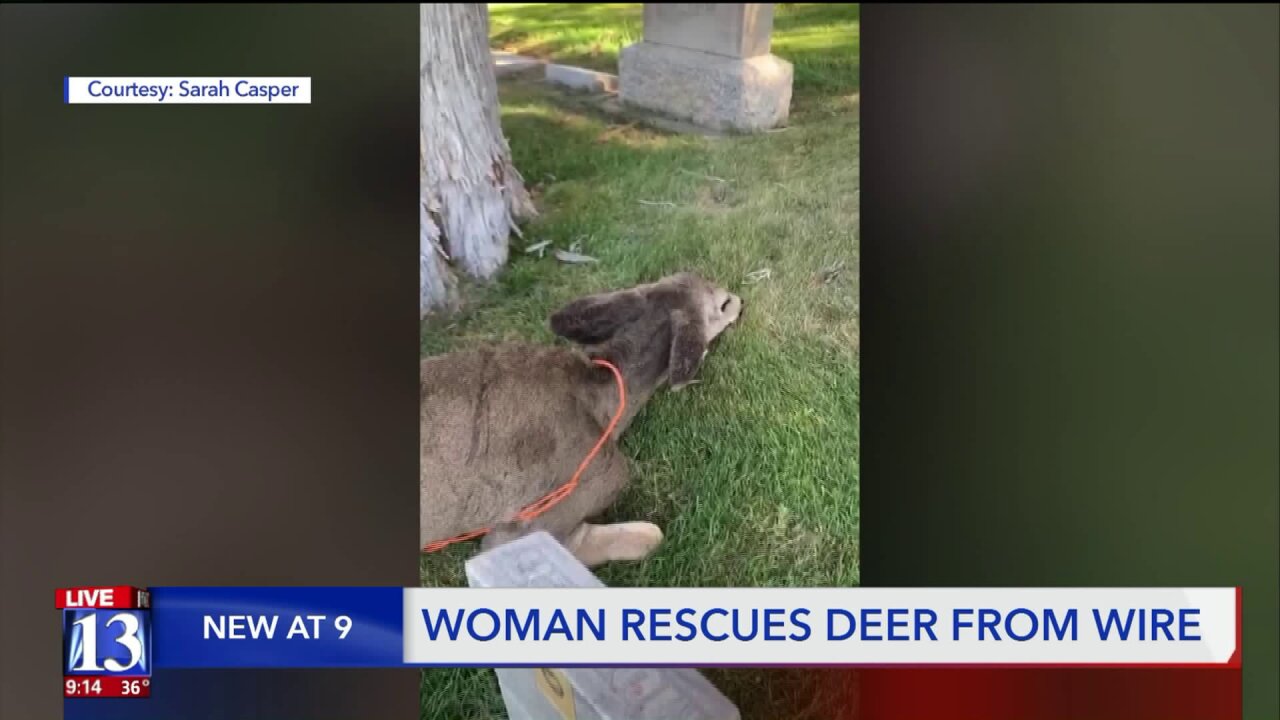 SPRINGVILLE, Utah — A Utah woman said it was an instance of "motherly instincts," but not for her own children — for an injured deer that was trapped in a wire.

It’s an up-close encounter you must see to believe.

“I feel like it’s a peaceful place,” said Sarah Casper as she stood in the middle of the Evergreen Cemetery in Springville.

For Sarah, being at the cemetery brings her closer to home.

“My father’s here,” Sarah said. “I come here a lot because his grave is here.”

Over the last year, Sarah has visited the cemetery nearly every day. She even made it part of her weight-loss mission, using the grounds to exercise and connect with those paying their respects.

She considers it a form of therapy, but she never thought one day this would be the exact place she needed to be.

“I saw there was a deer and her babies kind of going through the cemetery,” Sarah said.

She watched just long enough to see the fawns’ mother jump into a wire ground mount that was secured on a grave — the orange entanglement is typically used to hold potted plants, but this one was empty.

“That’s the wire,” she said as she pulled the cut-up mess of metal from a garbage can Monday. “It was stuck, and it had literally gone up its entire body.”

The doe was trapped, unable to move and injured.

“I saw the babies and they went down [the hill] and I was afraid something was going to happen to them if I didn’t help the deer,” Sarah said.

“She was bleeding,” she continued. “It wasn’t an option not to try and help her.”

Sarah knew she had to do something, so, she pulled out her phone and started heading towards the animal.

“I was like, 'Be vulnerable, be brave, I can do this,'” she said as she repeated her mantra aloud.

As the 9-minute video continues, you can hear Sarah calling to others for help.

She asked the strangers to call 911 and let animal control know they had a problem. All the while, she continued to try and get closer.

At first, the deer was skittish and used the little strength she had to try and run – however, with the wire still wrapped tightly, she couldn’t get very far.

As the minutes passed, Sarah got closer.

Sarah wasn’t going to give up – eventually, the deer even allowed her to start removing the wire.

“Oh, my goodness! She trusts me!” Sarah said as she turned the phone camera around to show herself sitting next to the deer as she petted it.

Unfortunately, it was more than she could handle with her bare hands.

“I know it’s hard, we’ve got to get this off of you or you’re not going to be able to see your babies anymore,” Sarah talked to the deer as she stroked its nose and scratched between its ears.

Until finally, the moment she had been waiting for.

“Let me get my bolt cutters and cut that off okay?” a man could be heard telling her as the video recording continued. “All tied up, isn’t she?” he can be heard again, followed by a few snapping noises.

As the deer broke free, it created a moment Sarah said was indescribable.

Looking back, she said it’s a relationship she never thought she would build.

“I just felt like we connected, I don’t know what it was,” said Sarah. “She would have died for sure, there would have been no question, plus the two little ones.”

So, with just minor scratches, the deer was freed. As for Sarah, well, she’s feeling like one proud momma.

“She looked at me and I’m like, ‘Okay, go get your babies!’ and she just went,” Sarah smiled.

“So yeah, pretty cool,” she said as she put the wire in the trash bin for good.

Sarah said the only reason she filmed the entire encounter was so she could share it with her four children. They had never been more proud.

“When we all sat around and watched it, they were like, ‘You saved that little baby, mom!’” Sarah said. “You know what… that makes you feel good.”