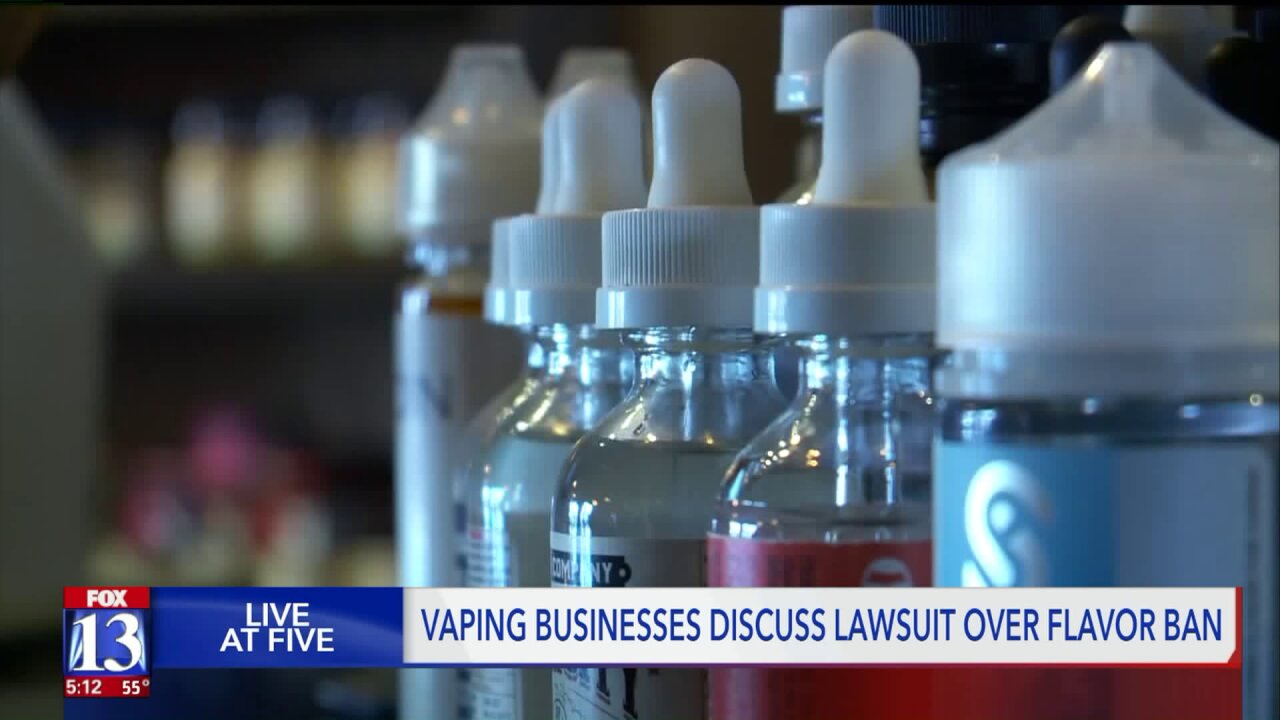 SALT LAKE CITY – In response to an emergency ban on flavored e-cigarette products, a group of Utah vape shops has filed a lawsuit against the State Health Department over concerns for their businesses.

“It’s our only recourse, at this point, they’re looking to put us out of business,” said Juan Bravo, Chairman of the Utah Vapors Business Association and vape shop owner.

Today, the Utah Vapors Business Association is fuming. Fearing their businesses will go up in smoke following a ban on flavored e-cigarette related products.
“It decimates it, it absolutely decimates it,” Bravo said. “It’s something that’s had a substantial economic impact on our businesses, we’re unable to sell much of anything.”

The ban went into effect Monday as a result of an emergency rule from the Utah State Health Department.

The ban comes in response to a nationwide health crisis, in which vaping illegal THC cartridges has caused illnesses and deaths.

While the health department believes the illnesses are a result of black-market THC, they decided to pursue the ban anyway, saying they consider vaping nicotine to be a gateway to vaping THC.

Now, with their businesses on the line, some vape shop owners are pushing back.

“I mean there’s 15-hundred general tobacco retailers in the state,” said Bravo. “You’d have people who could not fulfill leases, you’d have people that would lose their jobs, multiple business owners that would more than likely have to declare bankruptcy.”

Tuesday, they filed a more than 20-page, ‘complaint about temporary restraining order, preliminary/permanent injunction and declaratory order,’ against the State Health Department.

“We’re asking that the language in the emergency rule, and eventually law, be changed from ‘licensing’ you know specialty tobacco retail and general tobacco retail and change it so age-restricted environments are still able to sell e-liquid,” Bravo said.

In a statement to Fox 13, the Health Department said they would not speak directly to the claims made but maintain protecting the public’s health is their top priority.

“While we won't speak directly to the claims made by the plaintiffs in their lawsuit, we can say protecting the public's health by stopping the outbreak of vaping-related lung injuries is our top priority.

As we have stated previously, vaping THC cartridges appears to be a driver of the outbreak. We know people who vape nicotine are significantly more likely to use THC products, and we know the outbreak has hit youth and young adults hard. So, if we can reduce youth access to nicotine vaping products we can also reduce the number of people who may eventually move on to using THC products.” – Utah Department of Health
The case will be heard by the courts this Friday at one o’clock.