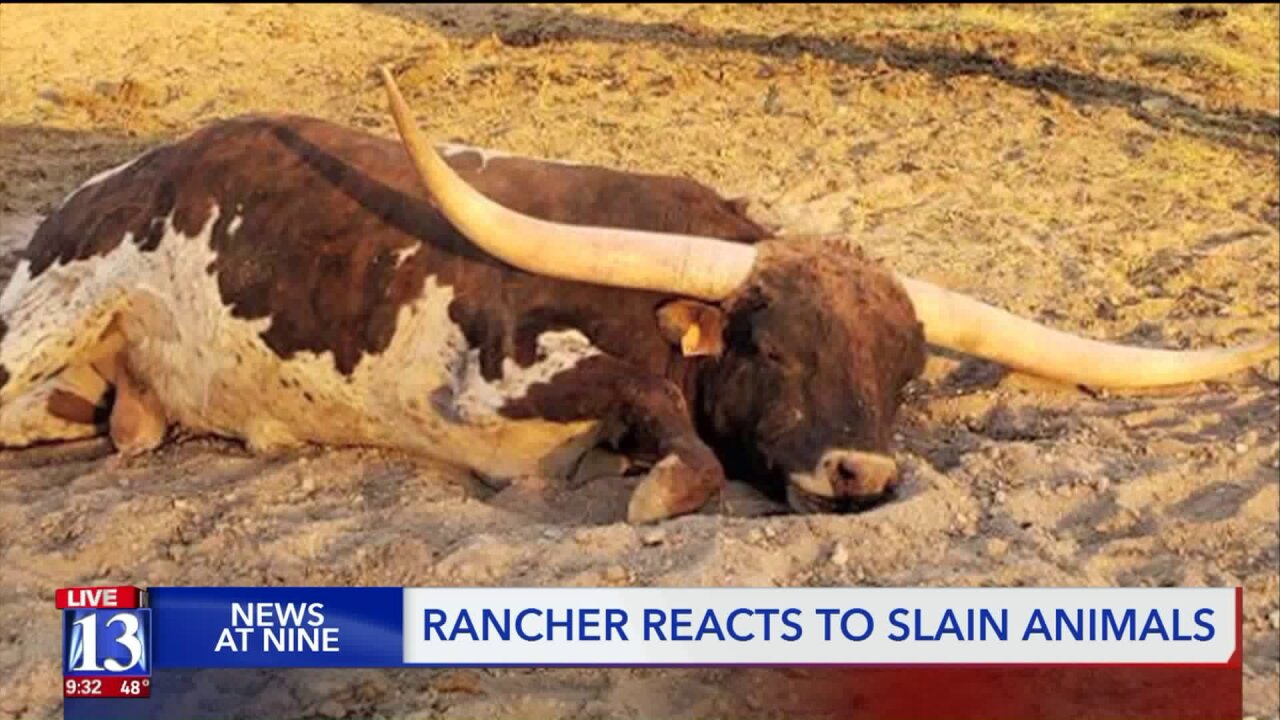 MAYFIELD, Utah – A central Utah family is looking to the public for answers after two of their animals were shot and killed while they were celebrating the birth of their daughter, setting them back thousands of dollars and taking an emotional toll.

“This guy right here, his full name is Hubbles Loaded Weapon, we just call him Loader,” Mark Mecham said as he pointed his camera at two Texas Longhorn bulls on his ranch.

Ranching is a way of life for this Mayfield family.

“It’s an everyday thing, there’s no day off,” Mecham said. “It’s a big commitment to have these kinds of animals.”

It’s a labor of love, but the Mechams love doing it.

“You like having your horns scratched too, don’t you?” Mecham said as he scratched the space between Loader’s horns.

“They’re such trusting and gentle creatures,” Mecham said. “People think they’re scary because of their big horns, this guy’s just a puppy dog!”

Living in their small central Utah community, with only four nearby neighbors, they have never had a reason to worry about the many animals they care for -- until last Wednesday.

“It’s just senseless,” Mecham said as he shook his head. “It makes you fear that it’s going to happen again.”

Mark had fed and checked on all the animals just before he and his wife left their house around 7 p.m. Wednesday night. They were on a fast track to the hospital, ready to celebrate a new addition to the family.

“We had a little baby girl, Oakley!” Mark smiled.

But when they came back from the hospital, their hearts sank.

“When we returned home from this happy occasion, we had something not so happy to deal with,” he said.

They looked over to one of their fenced-in areas and saw two of their animals, not moving, on the ground.

“We were hoping they were ill or something else was wrong,” Mark explained.

Taking a closer look, they saw a bullet hole in one of their gentle giants — a 3-year-old Texas Longhorn Bull worth $5,000.

“He had a really beautiful head, beautiful set of horns,” Mark said.

“When I walked up to him, you could see where his face had been in the dirt and where his nose and his horns had actually been going back and forth, so he didn’t just drop and die in an instant,” Mark’s voice dropped. “It was hard to see him in that position and know that he didn’t just die, he actually did suffer.”

When they walked up to the Black Angus Steer calf next to the longhorn, they saw more of the same.

“It is really sad, you become attached to them,” Mark continued.

The senseless act has set them back thousands and then some.

“There’s the monetary thing, there’s the emotional part, psychological… now we have to wonder every time we hear a shot,” he said.

And while they can’t get their animals back, they hope whoever caused their deaths will be found.

“This is not a victimless crime, it’s not just a cow, there are consequences to it,” Mark said. “We just hope whoever did it is caught, and they won’t do it again and put people through this unnecessary heartache.”

The Mechams said they no idea who did this, so they are relying on help from the community to bring their animals some justice.

In a Facebook post, Mark said they are offering a $2,500 reward for anyone who has information that can lead to the arrest and conviction of those responsible. At last report, it had been shared 43,000 times.