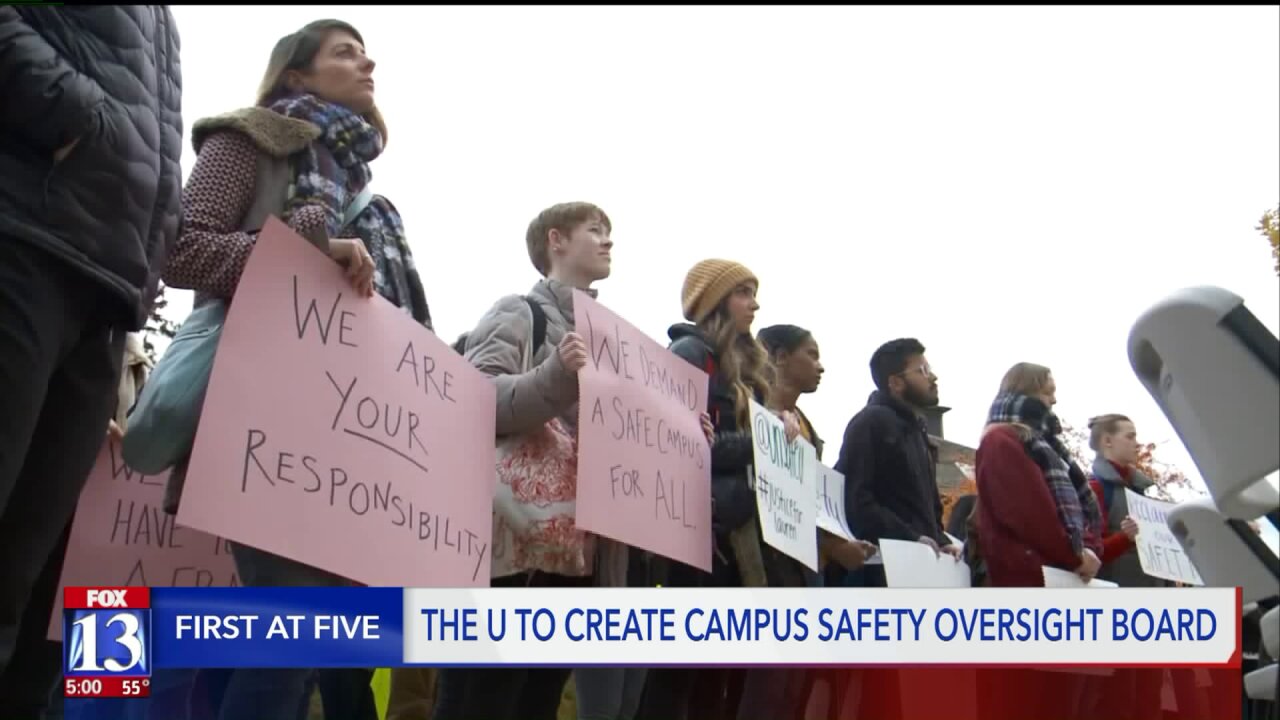 SALT LAKE CITY — More than 100 students walked out of class at the University of Utah Monday before gathering at the top of Presidents’ Circle.

The students argued that the school continues to dangerously mishandle safety issues.

Tuesday marks one year since Lauren McCluskey was shot and killed on campus by a man she had recently dated. The track and field star asked campus police for help several times before her murder.

“It’s been hard this past year,” Alex said.

Behind her smile is a grieving friend who admitted she still hasn’t coped with Lauren’s murder.

“Just seeing how nothing was done is hurtful,” Alex said.

When Lauren was being stalked by her killer, Alex went along when she filed a report to police. Alex remembers promising Lauren that University Police would keep her safe.

“Finding out that they never did anything was hard,” Alex said.

The group "unsafeU" planned Monday's walkout to call attention to campus safety and the way the case was handled.

"I hope all [University of Utah] students and faculty join in the campus-wide walkout on Oct. 21, from 11:30 am-1:00 pm. On Oct. 22, the one-year anniversary of the day Lauren was murdered on campus, the students will hold a vigil."

“Safety starts with policy that changes culture, and there has been very little policy actually made to make us safer as students,” Craig said.

Students delivered a declaration of protest to school officials, which can be read here.

University of Utah Spokesperson Annalisa Purser told FOX13 the school has taken dozens of steps to improve campus safety but adds there is always room for improvement.

“It’s always important to hear from students,” Purser said. “They have a perspective that is really valuable so it’s important that we hear from them directly and how we can partner moving forward.”

The university released a statement during the protest where officials announced the creation of a campus safety oversight board.

After meeting with protesters Monday morning, the University agreed to some of their demands by creating a campus safety oversight board and a safety data dashboard added to the SafeU website. The administration also agreed to act on items related to the University of Utah Department of Public Safety, by increasing coordination across campus and other law enforcement agencies, additional training, and an improved facility to better serve the needs of staff and students.

While Alex believes the university still has many lessons to learn after Lauren’s death, she’s glad she came.

“It feels like a silent battle against the university, her parents and I against the University, so it’s nice to see more support.” Alex said.

Lauren’s mother, Jill McCluskey tweeted in support of Monday’s walkout and rally by writing, “The U campus police culture must change. It cost Lauren her life on #Oct22nd. #BelieveWomen #CampusSafety"

The McCluskey family is suing the university for failing to protect their daughter.